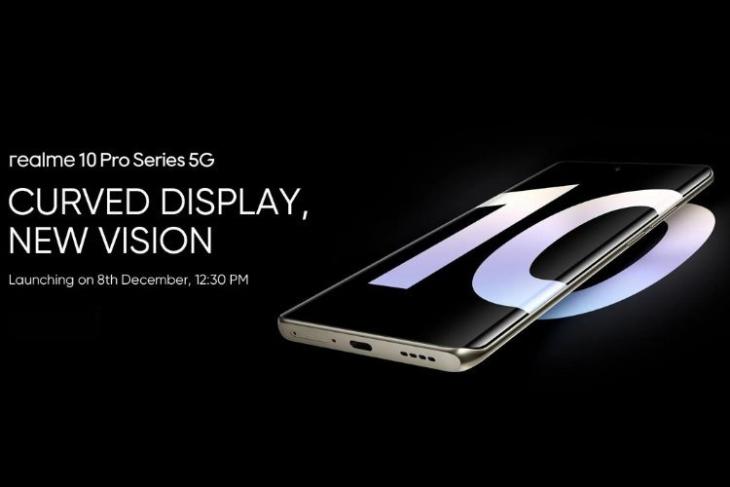 Realme is all set to bring its next-gen number series, the Realme 10 Pro lineup to India on December 8. The Realme 10 Pro and the 10 Pro+ 5G phones, which were launched in China recently, will succeed last year’s Realme 9 Pro phones. It brings along features like a curved display, up to 67W fast charging support, and more on a budget. Check out the details below.

Realme’s new number series will launch in India at 12:30 pm on December 8. This could possibly be an online launch but more details are awaited. It is also confirmed that the phones will be available via Flipkart.

The Realme 10 Pro+ introduces a curved 120Hz display to a budget-mid-range phone and is touted to come with the narrowest phone chin. The 120Hz curved display also comes with 2160HzPWM dimming and the world’s first flicker-free TUV Rheinfield certification.

The phone also gets a MediaTek Dimensity 1080 chipset, becoming the first in India to sport one. As the phone has already been launched, we know that it comes with a 108MP ProLight Camera, along with an 8MP ultra-wide lens and a 2MP macro camera. There’s a 5,000mAh battery with support for 67W fast charging, Realme UI 4.0 based on Android 13, and more.

The Realme 10 Pro, on the other hand, gets a flat 120Hz display, a Snapdragon 695 SoC, and 33W fast charging. It comes with 108MP ProLight rear cameras and runs Realme UI 4.0 based on Android 13. Both of them feature a Hyperspace design inspired by the concept of hyperspace tunnels.

Realme is yet to reveal more information on the upcoming Realme 10 Pro series, including the price (it could start at under Rs 20,000). So, stay tuned for more updates, and let us know if you are excited about Realme’s new number series in the comments below.