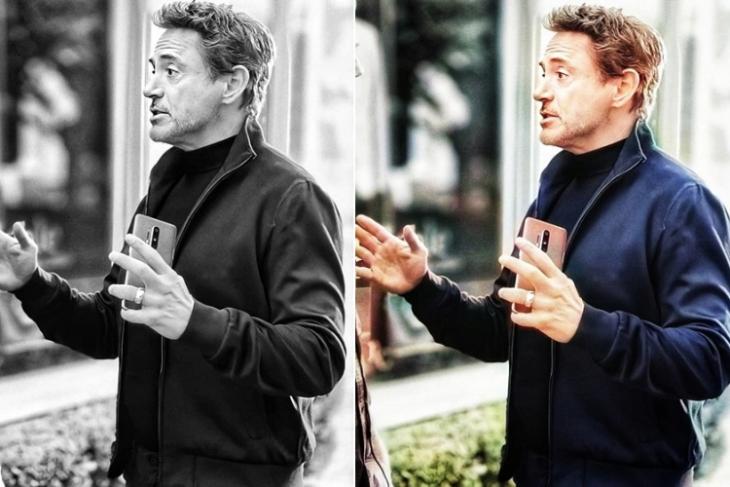 OnePlus is rumored to unveil its newest OnePlus 8 series sometime next month. We have seen a number of OnePlus 8 Pro leaks in the past but today’s leak comes from one of the most credible sources. OnePlus 8 Pro has been spotted in the hands of popular Hollywood actor Robert Downey Jr., who also happens to be OnePlus’ brand ambassador.

The image where Robert Downey Jr. can be seen holding the OnePlus 8 Pro was reportedly posted on Instagram by director Sam Jones. The original post has now been deleted but as the popular saying goes – “Once on the internet, Always on the internet.” The images have since been reposted by several fan pages on Instagram.

At a quick glance, the device looks almost similar to the OnePlus 8 Pro renders that were shared by reputed leakster Onleaks towards the end of last year. There seem to be minor differences in the rear camera setup but that’s bound to happen since those renders were shared way ahead of its time and OnePlus may have revised its design quite a bit by now.

OnePlus is yet to officially confirm the launch date of the Oneplus 8 series. But, Going by the current leaks and speculations, the company is expected to announce the devices on 14th April. OnePlus CEO Pete Lau, in a recent interview, revealed that all of the models in the OnePlus 8 series will come with support for 5G connectivity.

OnePlus 8 Pro is expected to sport a 6.65-inch QHD+ Fluid AMOLED display with support for a 120Hz refresh rate. It is rumored to pack the latest Snapdragon 865 chipset, up to 12GB of RAM, and a quad-camera system on the rear. We can expect to see a 4,500mAh battery with 50W Warp charging and 30W reverse wireless charging. There are also the rumors of the company’s re-entry into the mid-range segment, with the launch of what could be the OnePlus 8 Lite. We’ve seen several leaks for the Lite variant over the past couple of months.