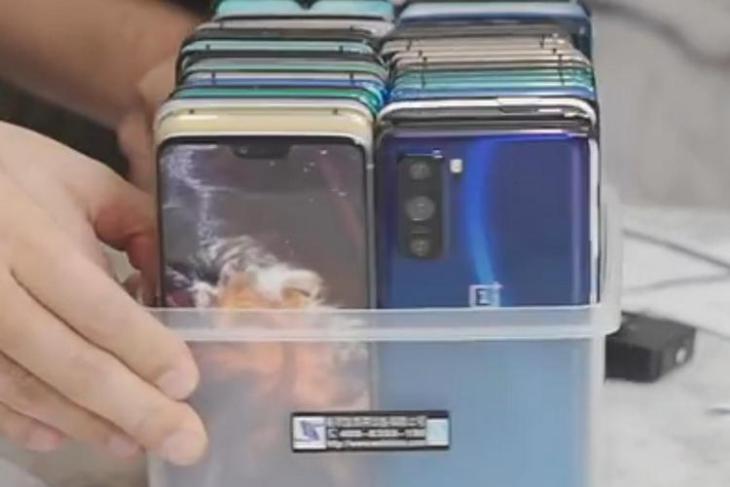 OnePlus’ upcoming mid-range smartphone, the OnePlus 8 Lite, is rumored to be launched later this year. We have earlier seen CAD renders for this device appear online but now a new set of images, which are said to be of the smartphone’s dummy unit, reveal that the OnePlus 8 Lite will ship with a triple-camera setup instead of the dual-camera module.

OnePlus 8 Lite will be the second offering in OnePlus’ rather short stint at building a mid-range smartphone. It will follow the OnePlus X, which was launched back in 2015 before the company ditched the idea of mid-range handsets.

Meanwhile, as can be seen from the images below, apart from the obvious change in the camera department, the new photos show a design that’s eerily similar to what we saw in the leaked render of the supposed OnePlus 8 Lite from last month. The images, published by SlashLeaks, show a whole stack of smartphones packed neatly in a transparent plastic container, including a blue one that’s said to be the OnePlus 8 Lite.

Alongside the leaked images, we also have a new CAD render of the device, thanks to the serial tipster, @OnLeaks. The render, updated with the additional image sensor following the leaked live photos, now shows a triple-cam setup at the back and a punch-hole display upfront. What’s notable is the presence of the alert slider that has become one of the most beloved features of OnePlus smartphones ever since it was introduced aboard the OnePlus 2 back in 2015.

As a little Eye Candy, my #OnePlus8Lite leak updated accordingly, in order to match today's prototype…
You're welcome…😋 pic.twitter.com/xupctBte7X

With flagship OnePlus smartphones increasingly being priced higher than their preceding generations, the OnePlus 8 Lite is likely the culmination of the company’s plans to offer something at a more affordable price-point to address the needs of more customers. While its specs, features, availability, and pricing details are not immediately known, it will very likely be a mid-range device with an affordable price-tag. It will be interesting to see if it will still offer the complete OnePlus experience in terms of its software or not.