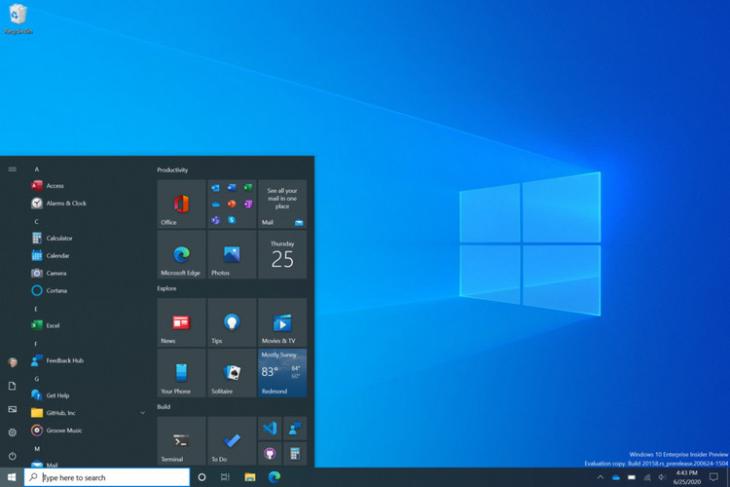 Microsoft has released Windows 10 Insider Preview Build 20161 to Windows Insiders in the Dev Channel. The new build comes with some cool features, but many of them are only available to select Insiders for now. So not all Insiders will get to check out all the new features right away. However, all the features will be gradually rolled out to everyone in the Dev Channel soon.

The most striking new change in Build 20161 is an all-new Start Menu design. As part of the change, the start Menu now no longer has solid color backplates behind the logos in the apps list. Instead, it applies a uniform, partially transparent background to the tiles. “This design creates a beautiful stage for your apps, especially the Fluent Design icons for Office and Microsoft Edge, as well as the redesigned icons for built-in apps like Calculator, Mail and Calendar that we started rolling out earlier this year”, said the company. The new Start Menu is available in both Light and Dark Themes.

ALT + TAB to Switch Between Apps and Sites

With Build 20161, all tabs open in Microsoft Edge will start appearing in Alt+TAB, not just the active tab in each browser window. It will aid productivity and help multitaskers quickly get back what they were doing, says Microsoft. Users, however, can still retain the classic Alt+Tab behavior by turning off the feature from Settings > System > Multitasking. This is one of the features that are only available to select Insiders for now.

The latest build brings “a cleaner, more personalized, out-of-box experience” to new users, says Microsoft. According to the company, it is using a flexible, cloud-driven infrastructure to test customer reception of default Taskbar content and tailor these layouts based on user and device signal. The company says it will continue to tune default layouts to minimize clutter and perceptions of bloatware. Do note that the personalized Taskbar feature is only applicable to new users.

Build 20161 comes with a number of other changes, including improved notifications and an enhanced Settings page with more elements from the Control Panel. What’s more, it also comes with some minor tweaks that the company believes will improve the experience on 2-in-1 devices. Finally, the Graphing Mode feature, which was originally rolled out in January to Insiders, is now available to general users. The update also comes with a number of bug fixes, including at least one related to Xbox connectivity. You can check out the detailed list of all the new features and fixes on the official Microsoft blog.