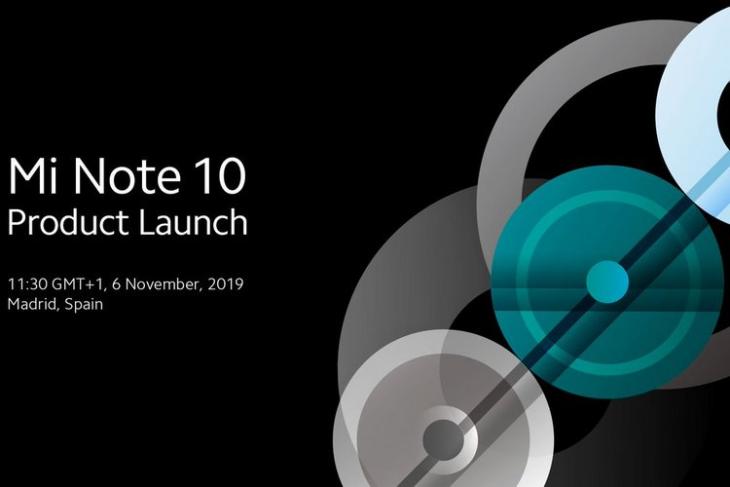 Xiaomi has confirmed that it will unveil the Mi Note 10 in Spain on Wednesday, November 6th. The device, which is expected to be the global version of the Mi CC9 Pro, will be launched in Madrid, the company announced via a tweet on Sunday. The event will also be live-streamed for fans around the world.

Welcome to the new era of smartphone cameras!

As mentioned already, the Mi Note 10 is expected to be the global version of the CC9 Pro that Xiaomi will launch tomorrow in China. The two devices are expected to ship with almost identical hardware, including a penta-cam setup at the back, led by Samsung’s 108MP ISOCELL Bright HMX sensor. The Mi Note 10 will also sport a 32MP selfie-cam with support for wide-angle shots.

Xiaomi has also revealed the exact configuration of the Mi Note 10’s penta-cam setup, confirming that the 108MP primary camera which will be joined by a 5MP shooter with up to 50x zoom, a 12MP sensor for portraits, a 20MP ultra-wide snapper and a 2MP unit for macro shots. Also, at least two of the lenses on the CC9 Pro will have optical image stabilization (OIS), which means we should expect that in the Mi Note 10 as well.

The Mi Note Pro should also come with mush the same specs as the CC9 Pro, including a 6.47-inch FHD+ display, Android 9-based MIUI 11 and a 5,260mAh battery with 30W fast-charging support. However, while all that looks exciting, many are disappointed that the device will only ship with the Snapdragon 730G, which is why some are wondering if Xiaomi is planning to launch a ‘Pro’ version of the Mi Note 10 with the Snapdragon 855+.