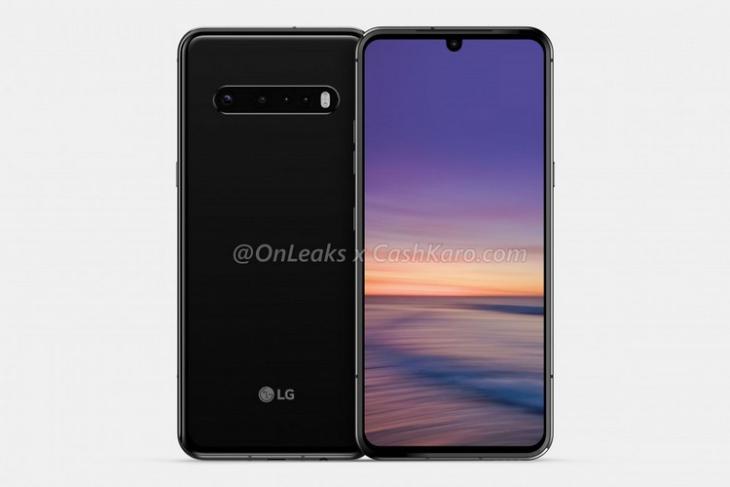 Contrary to rumors about LG discontinuing its flagship G-series smartphones, the company may very well be working on the next device in the lineup if a new report from a well-known tipster is anything to go by. According to Steve H. McFly (@OnLeaks), the LG G9 is in advanced stages of development, and the company is bestowing it with four cameras on the back as part of its plans to position it as a photography-centric device, like the also rumoured Nokia 9.2 PureView which reportedly got delayed recently.

As can be seen from the CAD renders published by tech blog, CashKaro, the device will ship with a quad-cam setup at the back, arranged neatly in a horizontal housing at the top. Upfront, the renders show a tiny teardrop notch for the selfie-cam, while the lack of a physical fingerprint scanner at the back suggests that it might support an in-display sensor, though it’s not immediately clear if it will be the recently-announced ultrasonic unit from Qualcomm.

The renders also show what seems to be a rather large display that is said to be between 6.7-inches and 6.9-inches in size. The device also seemingly sports a USB Type-C port for charging and data syncing, as well as a 3.5mm audio socket – a feature that seems to have gone the way of the dodo, at least, in flagship smartphones. According to the report, the device will measure around 169.4 x 77.6 x 8.8mm, while the camera bump is said to add a further 0.6mm to the thickness.

Do note that the aforementioned details are based on only one source, and even though McFly has a proven track record for the most part, it would be for the best if we wait a bit longer to get the information verified by other sources independently. Either way, it’s not immediately clear as to when LG will announce the device officially, but given that the G8 was unveiled at the MWC last year, it won’t be totally out of place to expect LG to unveil its successor at around the same time this year.