Founded in 1997 by Russian entrepreneur Yevgeny Valentinovich Kaspersky, the Moscow-based Kaspersky Lab has become one of the most respected names in the world of cyber-security, with its endpoint security software solutions employed by millions of home users, businesses and government agencies the world over. However, a recent report suggests that Kaspersky Labs may have close ties to to the Russian intelligence agency, FSB, prompting the Trump administration to announce that the company will no longer be allowed to sell its products and services to the federal government.

While possibilities about Kaspersky’s close ties with Russian intelligence agencies have often been discussed aloud in sections of the U.S. media, Kaspersky Lab, on its part had always maintained its innocence. However, with the revelation of a series of emails between the Russian software-maker and the FSB now public, many users are wondering if it’s worth the risk using a product that may or may not be revealing their private, confidential information to Russian government agencies.

Eugene Kaspersky and his eponymous software company, on their part, continue to protest their innocence, but many are not convinced. No one knows what the true story is and the extent of the alleged ‘cooperation’ between the two entities, but if all the talk about the coziness between Kaspersky and Russian intelligence agencies makes you ill-at-ease with using Kaspersky’s security solutions, you should take a look at the top 6 Kaspersky alternatives you can use to secure your PC:

The Bitdefender virus scanning engine has consistently ranked as one of the best-performing ones in the market in research done by many reputable third party organizations, including AV Comparatives. The software also comes with a long list of extra tools, including a password manager and built-in protection against ransomware. While the company does offer a free version for home users, these add-ons are only available on the paid versions that start at $39.99 for one year. 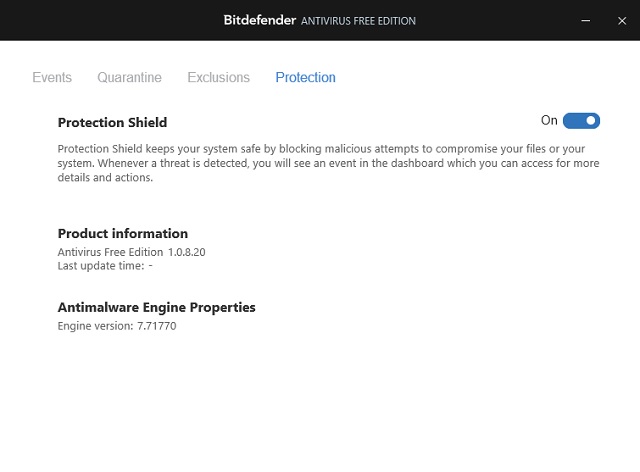 Bitdefender’s AV engine is so good at detecting malware that its engine is used by various 3rd-party anti-virus vendors, like Bullguard, Emsisoft, F-Secure, GData, Iobit, Quick Heal and a whole host of others. Bitdefender is, by far, the best Kaspersky alternative you can have on your PC, given that it can eliminate just about any threat without generating too many annoying false positives. The program came in at number two in AV Comparative’s latest (June 2017) study with 1953 samples of malware identified positively out of a total of 1955, giving it a a detection rate of 99.9%. What’s just as reassuring is its very low rate of false positives, which means you won’t be bothered with too many popups with Bitdefender installed on your device.

Trend Micro doesn’t have a free real-time antivirus, but it does offer free tools to remove ransomware from your PC. The company is one of the best-known names in the world of cyber security, and offers many innovative features with its antivirus program, including the ability to protect individual folders from ransomware through a tool called ‘Folder Shield’. The program also claims to stop spyware from tracking your web activity and thwarts hackers from stealing your personal data. It also comes with parental control that allows you to stop your kids from sending personally-identifiable information to strangers. The program also has a built-in utility to check your security settings on social media sites like Facebook, Google+, Twitter and LinkedIn, to help you maintain your privacy. 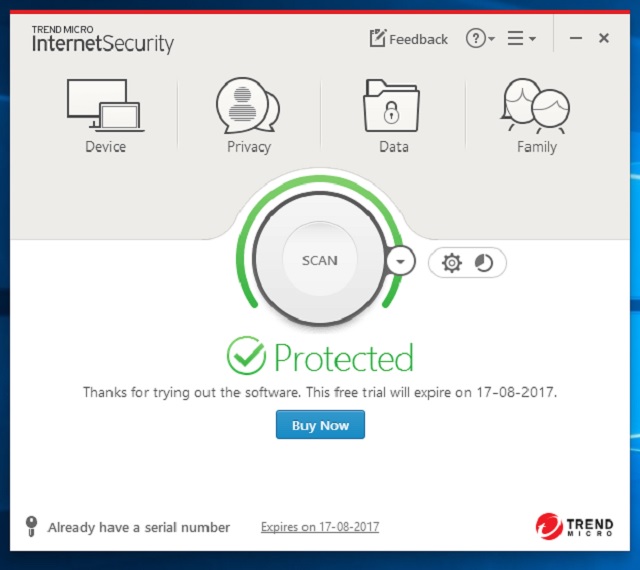 Trend Micro is one of the best antivirus products on the market right now, and although it doesn’t unfortunately have a free version, the paid versions that start at $79.95 are definitely as good as any paid AV product in the market today. In fact, according to the latest study conducted by AV Comparatives, Trend Micro Internet Security actually managed to edge out both Bitdefender and Kaspersky, emerging as the number one anti-malware engine with a 100% detection rate, having detected all 1955 samples of malware in a real-world environment. On the flip side, it also has a very high rate of false-positives, and a large number of wrongly-blocked domains.

AVG is one of the best-known anti-virus vendors in the world, and has been so for well over a decade now. It is best known for its free anti-virus program, which at its peak, was virtually the default security software on the PCs of most users. Most of us have used it on our computers at some stage in our lives, and I can personally vouch for it, as it kept my system virus-free for the better part of a decade. 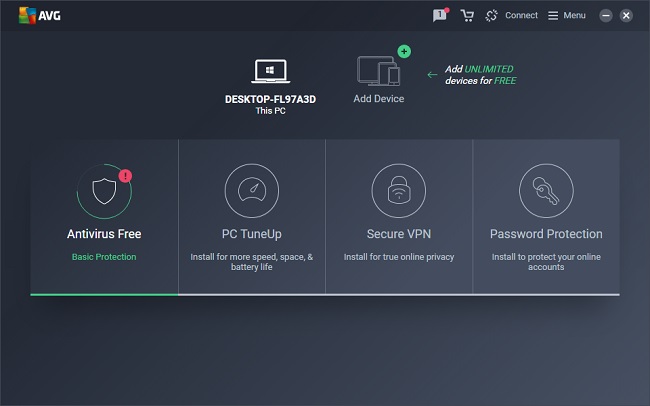 AVG’s free anti-virus program continues to remain a stable solution, and is still one of the best free anti-malware software available for download, performing admirably against most of the paid security software available in the market today. However, the company also offers its Internet Security suite that costs $35 per year and comes with a few more bells and whistles, like protection from hackers and malicious email attachments. Overall, AVG is definitely worth a shot as a Kaspersky alternative.

Like AVG, Avast is also primarily known for its free AV program, something that I have also used extensively for several years on my own computers. From my experience, it has very few false positives, even though its detection rate is as good as anyone else’s in the industry. In the latest AV Comparatives test referenced above, it tied with AVG by correctly identifying 1948 malware samples out of a possible 1955. I’ve only ever used the free version of this program which comes with pretty much all the features you can expect from a free AV, but the company also offers a paid version that costs $39.99, but to be perfectly honest, doesn’t really offer you too much more in terms of features and options compared to the free version. 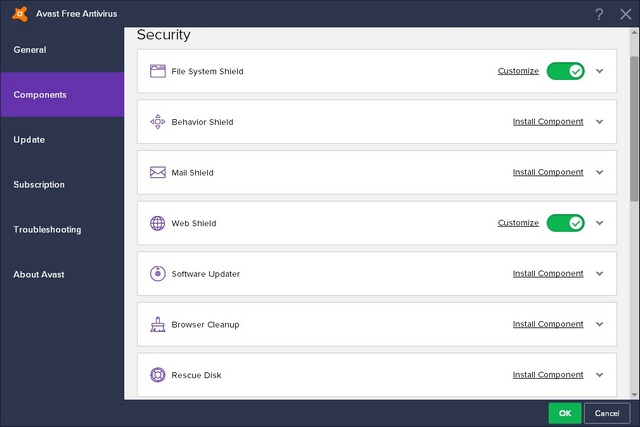 What’s really surprising is that unlike most AV vendors like Kaspersky, Avast doesn’t even stop people from using its free AV in a commercial environment, further disincentivizing users from actually paying money for the product. Unless of course, they want to show their support for the developers for creating and maintaining a high-quality security software and then giving it away for free. Overall, it’s a great product that updates multiple times a day and is very light on the resources.

ESET NOD32 is yet another antivirus program that scores pretty highly in most tests performed by independent labs, and it also comes with its own phising protection, HIPS protection and malicious URL blocking abilities. If all that isn’t impressive enough for you, maybe you’ll be impressed with the fact that its scanning is also faster than most of its competitors in the market, including Kaspersky, which is certainly something to consider when you have hundreds of Gigabytes – or even Terabytes – of data on your computer. 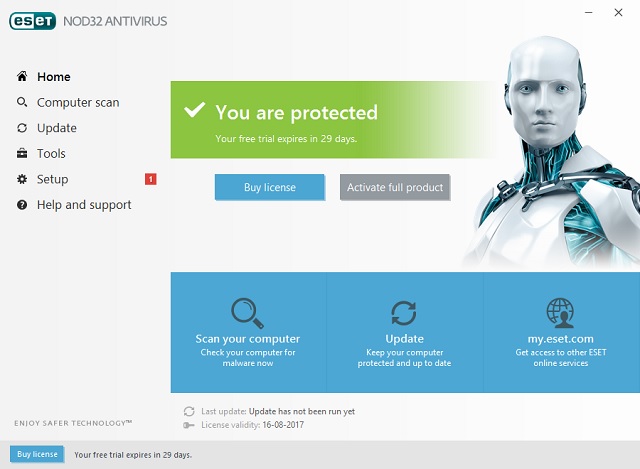 Another remarkable thing about the ESET NOD32 is that it produced only a single false positive in the latest test conducted by AV Comparatives in June 2017. On the flipside, ESET NOD32 only managed to receive a score of 15.5 out of a possible 18 in the latest test report from AV-Test Institute, while Kaspersky, Trend Micro and Bitdefender all received a perfect score. The software doesn’t have a free version, so you’ll have to pay $39.99 to use it on one PC for one year.

Once the butt of all jokes for being bloated, inefficient and a huge drag on resources, Norton Antivirus has managed to salvage its reputation in recent times by becoming more user-friendly and less of a resource hog. Symantec has also managed to reduce the number of false positives on its program, making it one of the better AV software available in the market today. Norton Basic Antivirus, like its more illustrious stable-mates, comes with a minimalist interface, making it very user-friendly. You get real-time scan, on-demand scan, as well as intrusion prevention, something that’s typically found with firewall programs. Norton Basic Antivirus also has a feature called ‘Power Eraser’ that is essentially a nuclear option to eradicate the most persistent of malware. 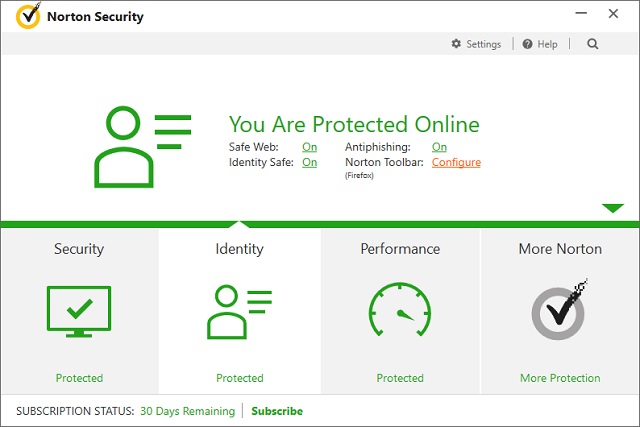 Symantec had actually stopped offering its standalone AV solution a few years ago, but brought it back as Norton AntiVirus Basic that comes with a list price of $49.99 for 1 PC (1-year), although, you can pick it up for just $19.99 right now with a $30 discount on the company’s official U.S. site. In case you want protection on multiple device across platforms, Symantec’s got you covered as well, with the Norton Security Premium that’s listed at $89.99 per year for up to 10 devices.

Most users don’t realize this, but your Windows PC already has a built-in security solution called Windows Defender. Depending on which version of Windows you’re using, it even comes with real-time scanning, so if you’re using Windows 8/8.1 or Windows 10, you may not even need a third-party anti-virus program, because Windows Defender not only ships with your computer out-of-the-box, but is also turned on by default. 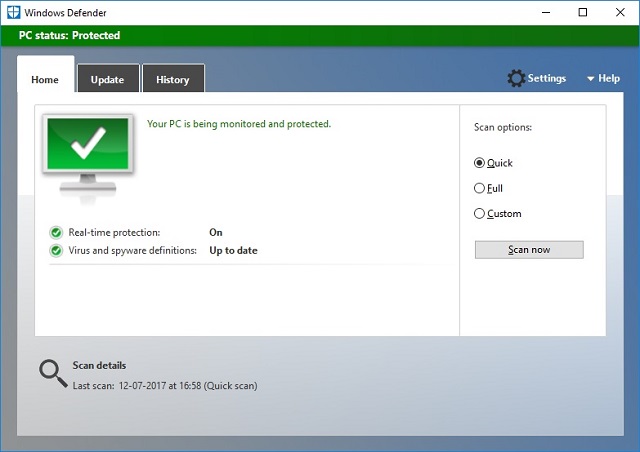 However, in case you’re running Windows 7 or Vista, Windows Defender is only an on-demand scanner that doesn’t have the ability to scan for threats real-time. However, even then, you can download and use Microsoft’s free in-house real-time anti-virus program called Microsoft Security Essentials. So depending on how paranoid you are about online security you may not even feel the need to download any additional program on your Windows PC to get comprehensive anti-malware protection.

The Best Kaspersky Alternatives for Windows, macOS and Android

Targeted malware these days are all about making money from unsuspecting netizens, and the best way to do that is to install rootkits, spyware, adware or keyloggers in someone’s computer. Cyber-criminals are also finding ways to infect devices with ransomware that encrypts a user’s files and folders, which can then only be decrypted using a special key once a ransom is paid. In this scenario, AV software, no matter how good they are, offer very little protection, but the ones mentioned in the list above comes from reputable vendors, and should still offer you the best protection available today. So, if you don’t want to use Kaspersky anymore, you should check out the aforementioned alternatives.

However, as is always the case, the best protection you’ll ever have is your own common sense, so be careful about which sites you visit, which ads you click on, which e-mail attachments you download and which software you install, because that is how most people end up with malware infections on their devices.

So, what do you think of these Kaspersky alternatives? Let us know your thoughts in the comments section below.

10 Best Antivirus Packages for Your Mac

What Is a VRM in Motherboards and Why Is It Important?