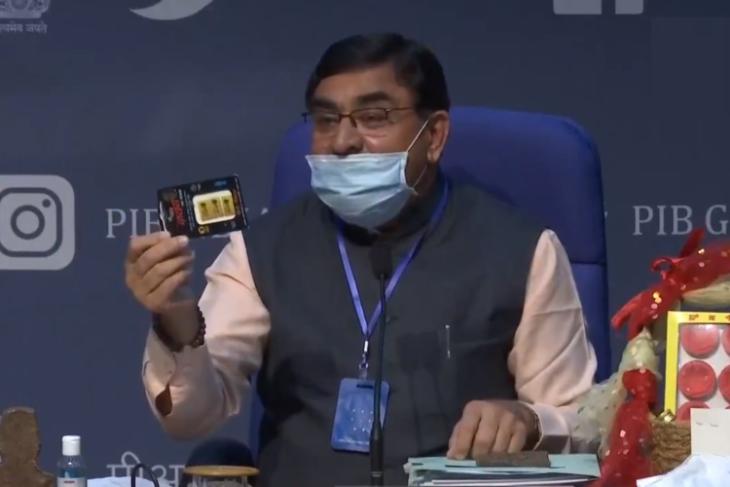 Indians, as we know, are obsessed with cows and their by-products. When the deadly Coronavirus was rising uncontrollably, one of the members of the Bhartiya Janta Party of India stated that cow urine and cow-dung can be used to cure COVID-19! Yes, those were the actual words of the BJP MLA from Assam. Now, another member of the party and the chairman of the Rashtriya Kamdhenu Aayog (RKA) has reportedly launched a chip for mobile devices which is made of cow-dung! Well, let that sink in first.

Prime minister, Narendra Damodardas Modi, if you are unaware, established the Rashtriya Kamdhenu Aayog with an aim to conserve, protect, and develop the cows of the country. Now, the organization’s chairman, Vallabbhai Kathiria, recently boasted about cow-dung, hailing it as “anti-radiation” and showed off a chip made of the same, which he claims can be used in modern mobile devices to reduce radiation.

“Cow dung will protect everyone, it is anti-radiation… It is scientifically proven… This is a radiation chip that can be used in mobile phones to reduce radiation. It will safeguard against diseases,” Kathiria stated in the recent press conference.

#WATCH: Cow dung will protect everyone, it is anti-radiation… It's scientifically proven…This is a radiation chip that can be used in mobile phones to reduce radiation. It'll be safeguard against diseases: Rashtriya Kamdhenu Aayog Chairman Vallabhbhai Kathiria (12.10.2020) pic.twitter.com/bgr9WZPUxK

This statement came from the BJP MP while launching a nationwide campaign for the upcoming Diwali festival. This “Kamdhenu Deepawali Abhiyan” aims to promote cow-dung products all around the country during the festive season.

Now, although we did not get an up-close look at the new chipset for mobile devices, Kathiria claims that these would “reduce radiation” and even “safeguard against diseases”. Well, in that case, Samsung, Qualcomm, and Apple, what are you guys even doing with your “advanced” 5nm chips?