With the advent of a multitude of VR Headsets, and an equally large number of cameras that allow for shooting 360° videos, it is clear that the time for VR is here. However, the price point of such cameras is absurdly high for casual users. Does that mean, then, that shooting 360° videos is not for casual users? Absolutely not! iPhone cameras have gotten a lot better in the past few years, and there is no reason why we shouldn’t be able to use them for casual 360 degree videos.

One of my favourite quotes in the modern, post-smartphone era, is “There’s an app for that!”. Do you see where I’m going with this? Read on to find out how you can shoot 360° videos directly on your iPhone, without having to spend any money on additional hardware.

Splash is an iPhone app that takes a well aimed shot (excuse the pun) at shooting 360° videos. It does this by using the same concept that is used by 360° photo apps, and simply extending the feature to videos as well. Ok, that’s not simple at all. In fact, it is amazing that they made an app that can shoot upto 10 videos of 2 seconds each, and stitch them together into one. All on your phone. The best part: it’s completely free.

Splash has a clean-ish interface, that is not hard to understand. The home page always opens up with “Featured Splashes” from all around the world, but you can change it to show the “Live” ones, instead. 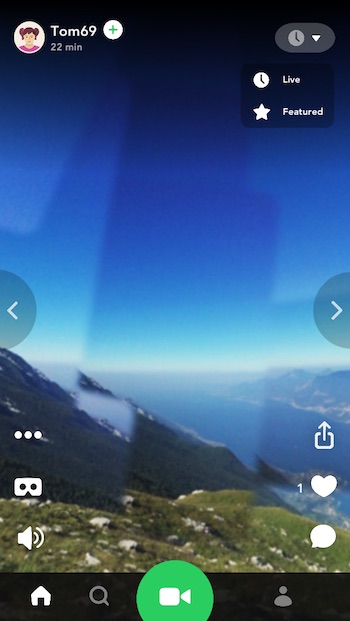 Note: They call them “live” splashes, but they are just splashes that have been uploaded recently. A more apt name would’ve been “Recents” or something.


Out of the icons you’ll see on the app, there’s an icon that looks like the Google Cardboard icon. You can tap on it, slide your phone into the Cardboard viewer, and use your phone’s sensors to look around, inside the video. Technically, you can look around without any VR headsets, but it’s a much better, more immersive experience in a headset like Google Cardboard.

Shooting 360° videos on Splash is easy enough to understand, if you have ever used a 360° photo app before. Even if you haven’t, it’s not that hard, although the instructions that the app provides can be a little confusing at times. From the interface visible in the home page, you can tap on the green button with the “camera” icon to allow Splash to shoot video using your phone camera. 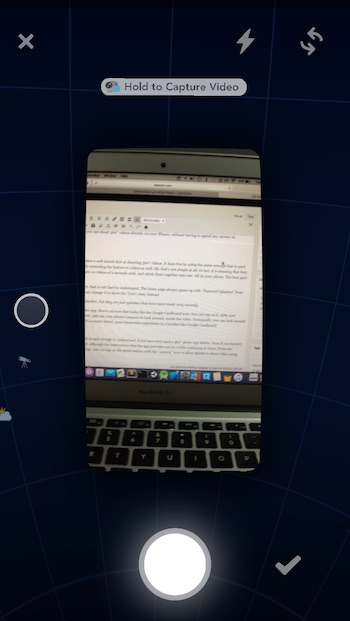 Inside the video interface, you can record a 360° video, much in the same way that one would record a panorama. Simply point your camera at the starting position that you want, press and hold the shutter button to record a video. Then, simply rotate your phone to the right, left, up or down, and continue the process until you have completed the sphere. You can also stop the recording mid-way, if you don’t want an entire sphere.

Note: There is only one problem with this entire process. It is mind-numbingly tedious, and does not result in properly stitched videos unless you have a very steady hand, and a lot of experience taking 360° photos. For noobs such as myself, the app poses a lot of challenges, and as interested as I am in making 360° videos, I don’t think I have enough time to invest into it.

Once you have finished recording the video, you can share it publicly, or send it to your friends using a third-party app, such as Facebook, or WhatsApp.

Splash allows you to view videos in two ways: you can use your fingers to pan around the video, or you can slide your phone into a VR Headset, such as Google Cardboard, and view the video.

Pro Tip: Use a Tripod

As with any 360° recording app that relies on you moving your phone around to capture the world around you, Splash’s video quality depends upon how stable you can keep your phone while recording. Human error is inevitable if you hold your phone in your hands and rotate your whole body to capture videos, but you can always place your iPhone on a tripod and rotate the tripod, ensuring better stability, and notably better video quality; provided you know what you’re doing.

SEE ALSO: How to Create Instagram Stories on Android and iPhone

Shoot 360 Videos on iPhone: Share the World Around You

While phones can never truly replace proprietary 360° video recording cameras that are specifically built for the purpose, apps such as Splash can give casual users an easy, cost effective way of exploring the many charms (and issues) of recording 360° photos and videos, and sharing them with loved ones. Along with all that, Splash also adds a Social element to the app, by allowing you to share your videos publicly, on Splash, so that other users can view them. The app in itself is great, and I’d recommend you try it out.

As always, do share your thoughts on Splash, on any other related apps that you use, and on 360° videos in general, in the comments section below.