The most widely-used messaging platform, WhatsApp has taken another step towards the improvement of your conversation experience. It has introduced a message recall feature, called Delete for Everyone, to make it easier for you to prevent the recipient from reading your wrongly sent messages. You now have the option to delete the messages in the chat window, not only for yourself but also the recipient of these messages. So, let us see how you can save yourself and delete messages you didn’t intend to send to someone.

Use ‘Delete for Everyone’ Feature in WhatsApp

Let’s assume you wrongly sent a text message to someone on WhatsApp and you’ve come to the realization that it was not meant for them. No worries. Here are the steps you need to follow to delete the message for everyone in a conversation, be it an individual or group chat:

1. Open the chat window and long-press the wrongly sent messages to select them. You will now see a familiar set of buttons at the top of the chat window. Tap the “delete” button to open its pop-up window, where you’ll select the “Delete for Everyone” option to retract your sent messages. 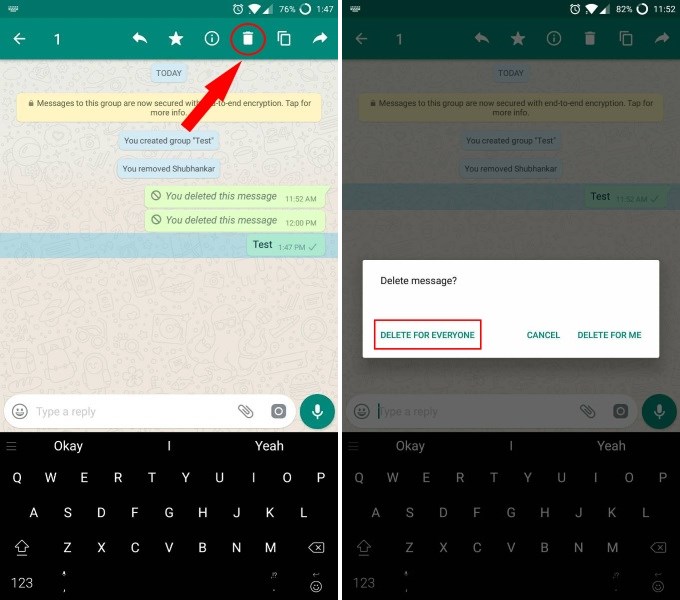 2. In doing so, the text within the message bubble on WhatsApp is replaced with a “This message was deleted” for the recipient. And you’ll see a “You deleted this message” tag on your screen. 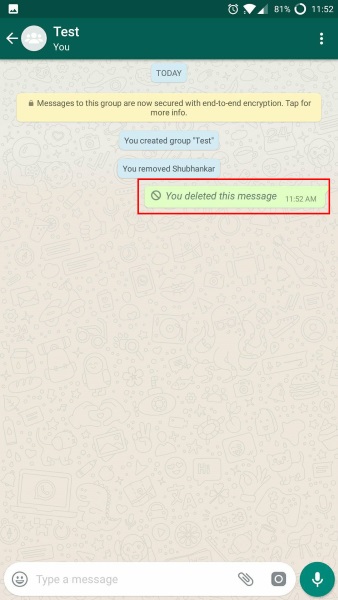 3. If you want to delete messages just for yourself, you can do so by tapping the “Delete for Me” button in the same pop-up window. 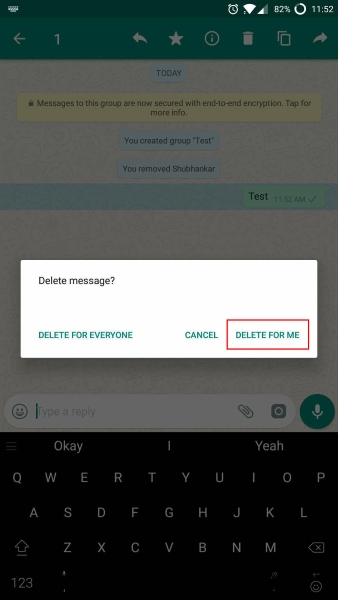 With the ability to delete sent messages for everyone, you can now save yourself from the embarrassment of sending messages to the person it wasn’t intended for.

Things To Know About the Recall Feature in WhatApp

You may have already learned about the working of the ‘Delete for Everyone’ feature but there are several other pointers you should keep in mind before trying to send and recall any message:

1. WhatsApp is not giving you complete freedom to delete messages for everyone at any time. You only have 7 minutes after sending the message to take action and choose the Delete for Everyone option. Once the said time frame is complete, you can no longer recall sent messages.

2. The most important thing being that ‘Delete for Everyone’ will only work when the recipient is using the latest version of WhatsApp, which supports the said feature.

3. The message recall feature will not only work for text messages but is also said to be compatible with images, GIFs, voice notes, contact cards, location, documents, status replies, and more. Also, the messages work in both group chats and individual chats. There is currently no support for recalling quoted messages. =

4. The Delete for Everyone action will also make message notifications disappear. You don’t have to worry about recipients reading your texts even in the notifications. They will be replaced with the same ‘This message was deleted’ tag.

5. The message recall feature is not available for messages sent in broadcast lists.

6. The message recalling feature is rolling out to iOS, Android, and Windows users. This means your recalling requests for messages sent to Symbian phones and BlackBerry phones won’t work, so you’ll need to be careful not to send them messages mistakenly.

WhatsApp’s fiercest competitor Telegram has had the recalling feature for months but its implementation is a little different. When you delete sent messages to your recipient on Telegram, all the selected messages just vanish from the conversation. The same is not the case with WhatsApp, as you may have read above.

I’m personally not a huge fan of Telegram’s implementation since it leaves no trace of sent messages in the chat window, for both the sender and recipient. I believe the replacement of the sent messages with a “deleted message” tag is important as it, at least, assures the recipient that some message(s) were sent to them. This is not possible on Telegram, which could be because of its heavy focus on user privacy.

SEE ALSO: How to Use WhatsApp Live Location Feature

We had been anticipating the release of the message recall feature for months and it seems WhatsApp has finally delivered. It will make it easy to cover up your mistake while securing the message contents from being read by the wrong person. The recall feature is rolling out quite slowly and is available to select users. You can expect the Delete for Everyone feature to make its way to every WhatsApp user within a couple days. If you’ve already received the Delete for Everyone feature, do let us know in the comments section down below.