There are three main types of microSD cards available in the market:

Shopping from a reputable online electronics store is also a safe bet. With a branded microSD card, you can expect better performance, reliability, protection against shock, water, and even airport X-rays. You also get warranty and access to recovery software, in case the SD card fails. Some of the popular brands are SanDisk (SanDisk Ultra, SanDisk Extreme), Samsung ( Samsung EVO), and Transcend (Transcend Premium, Transcend Ultimate).

Since SDXC format is backwards compatible, you can also purchase an SDHC compatible microSD card with its capacity up to 32GB. For instance – Samsung Galaxy S7 Edge supports cards upto 256GB, Moto G4 Plus 128GB, and HTC 10 256GB.

There are wide discrepancies in memory card transmission speeds among different SD memory card manufacturer and brand. Varying speeds makes it difficult to determine which card will provide reliable speed. The SD Association that creates standards for these products, don’t specify the exact speeds but instead provide guidelines and denote them in “speed classes.” The term speed class define two specific protocols:

Class 2 cards are too slow, so you might want to avoid them at all cost even for the cheapest digital cameras. Class 4 and 6 cards may be a cost-effective option if you’ve basic needs. Although there is no harm on using class 10 cards, it’s more likely a value issue than technical.

An SD card’s speed class is easy to identify — you’ll see it on the online store listing or on the card’s packaging. For example, in this photo you can see a class 4 and a class 6 microSD card.

Android has always had a limited support for microSD card. You can either use it to store photos, music, or videos or as a temporary storage for apps and games related data. However, Android 6.0 Marshmallow changed that with the introduction of the Adoptable storage feature, which lets you format a microSD card to act like internal storage. 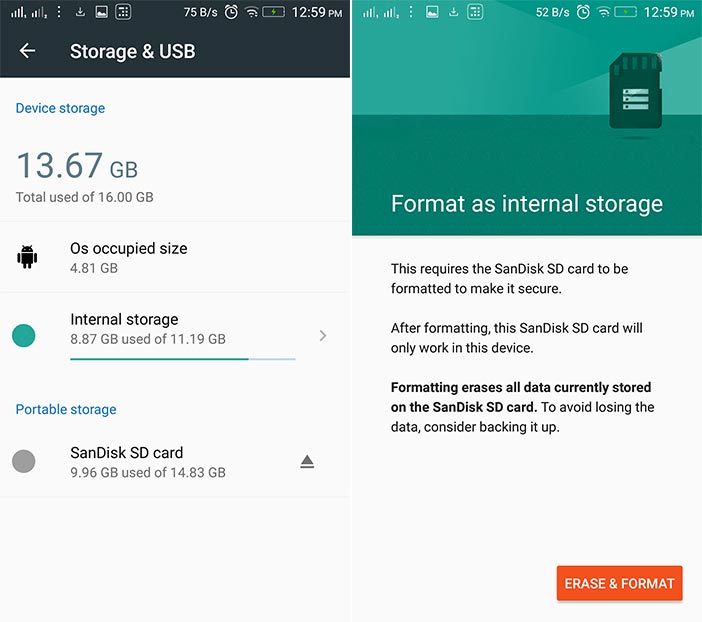 Once you adopt a new storage, it becomes a part of the system and is no longer removable. The platform runs a series of benchmark and compares its performance against internal storage. If your microSD is significantly slower, the platform will warn you about a possibly degraded experience with your phone. So, it’s important to choose a highest capacity and speed class microSD card. If your Android device supports 32GB, then go for 32GB SDHC class 10 card. For instance – Samsung Evo is a 32GB UHS -I class 1 SDHC card.

FAT32 is the recommended file system for SD and SDHC cards. If you’re planning to use your microSD card with PC and Macs at any point, then you should leave as it is. FAT32 offers near-universal interoperability with every computing system, including PC and Macs. FAT32 doesn’t support files larger than 4 GB and volumes greater than 2TB, so that’s the only disadvantage.

But most microSD cards aren’t available in such high capacities, except for SDXC which supports exFAT file format. exFAT file system supports files larger than 4GB, and supports macOS 10.6.6 and above or Windows 7 and above. If you just plan on using the SD card on your Android device, you don’t have to worry about the file system.

Things to Consider While Buying a microSD Card

Concluding this article, there are plenty of things to consider when buying microSD card, and this guide will give you an idea which card to buy. If you stick with a reputable brand and understand your needs, then you should not face any problems with your purchase.

Do you use a microSD card or want to share something you know? Let’s know in the comments section below.