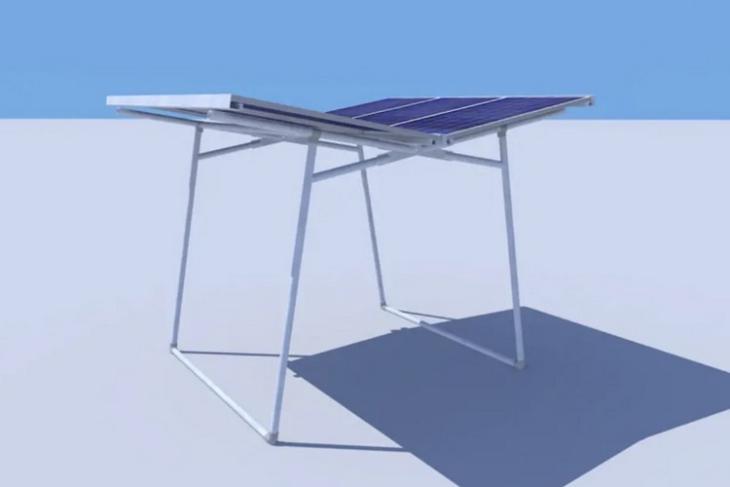 Citing the need for renewable resources to bring down the carbon footprint in India, the first portable solar rooftop system has now been installed in Gandhinagar, Gujarat. The new 10 PV Port system is designed to be highly cost-effective, requires low maintenance, and can be installed by a single person. Check out the details below to find out more.

The 10 PV Port system, developed by a German development agency named Deutsche Gesellschaft für Internationale Zusammenarbeit (GIZ), has been installed at the Swaminarayan Akshardham temple complex in Gandhinagar recently. It is taken care by the Union Ministry of New and Renewable Energy’s initiative. The PV Port systems are standard plug-and-play photovoltaic systems, consisting of a minimum of 2kWp, that come with or without battery storage.

The PV Port systems have been designed for 100% self-consumption. This means that no power is fed into the grid. The systems are designed to utilize the space beneath the solar panels to deliver more power and higher efficiency. One of these systems can help an Indian household save up to an average of Rs 24,000 on electricity bills each year.

“Such collaborations and the resulting synergies are expected to benefit consumers to a huge extent. We are very optimistic that the partnerships will provide us insights to deal with emerging challenges and capitalize on opportunities on the city level, which help us replicate the results in other cities across India,” said Jorg Gabler, the Principal Advisor of the International Renewable Energies in the Indian Electricity System (I-RE) project at GIZ India. You can check out an announcement tweet from the German Embassy in India right below.

The 10 PV Port systems, which are designed for the Indian climate, are manufactured by the New Delhi-based company Servotech Power Systems Limited, which is one of the leading manufacturers of high-end solar products. The company operates under the Make in India initiative and has been given the responsibility of installing 40 such PV Port systems throughout Gandhinagar.

The company has already installed 30 systems at Pandit Deendayal Energy University, Indroda Park, NIFT, Arya Bhavan, GSPC Bhavan, and other places. Going forward, the government is expected to expand the initiative to more cities in the country. Stay tuned for more updates, and let us know your thoughts in the comments below.