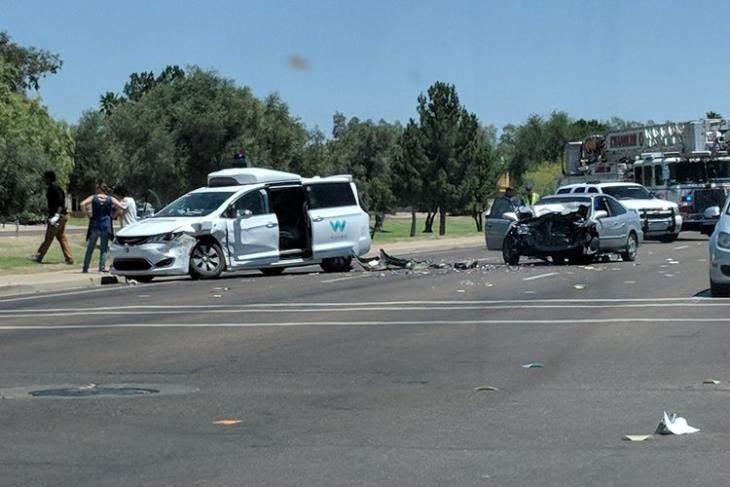 A Chrysler Pacifica self-driving minivan from Waymo had a crash with another car on Friday evening in Chandler, Arizona, reinforcing lingering concerns over the safety and efficacy of autonomous vehicles. The minivan is believed to have been in autonomous mode with a human driver behind the wheel when the incident happened, but reports suggest that it wasn’t to be blamed for the crash. Drivers of both the involved vehicles reportedly suffered only minor injuries and are expected to recover fully within days.

According to local news station ABC15, Chandler Police has confirmed that the Waymo minivan was traveling within the 45 mph (72 kmph) speed limit, and was not the ‘violator vehicle’.

Waymo itself has uploaded a dash-cam video from the affected vehicle on YouTube, seemingly corroborating the narrative that a car traveling in oncoming traffic swerved across multiple lanes and crossed over the median before striking the Pacifica.

The incident is believed to have happened when a Honda Civic, while traveling eastbound through an intersection on Chandler Boulevard had to swerve into oncoming traffic on the Westbound lane to avoid hitting an unidentified vehicle traveling northbound on Los Feliz Drive.

It’s worth noting here that this is the second known incident of an accident involving an autonomous vehicle in the state in as many months. Back in March, an Uber self-driving vehicle in autonomous mode was involved in a fatal crash in Tempe after it failed to detect a female cyclist and crashed into her in a tragedy that prompted the governor, Doug Ducey, to suspend the company from testing its autonomous vehicles in the state.

Tesla Confirms Autopilot Was On During Last Week’s Fatal Crash