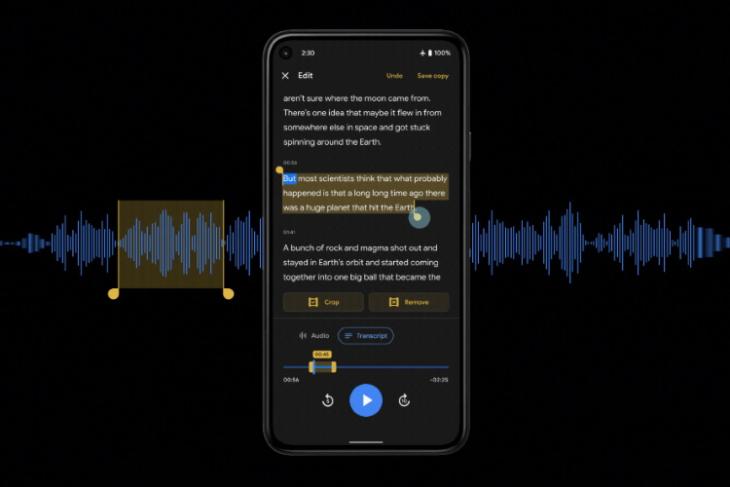 Google debuted a new recorder app with the Pixel 4 series earlier last year. It was not your ordinary voice recorder app but instead, it supported real-time transcription – a boon for journalists and musicians alike. The recorder app is now getting a couple of new features with the launch of the new 5G-enabled Pixel 4a 5G and Pixel 5.

First up, the recorder app brings along a new audio editing feature. You can select an audio clip (or a section of transcribed text) from a saved recording and then choose to remove or share the snippet with others. You only need to highlight the required text and hit the ‘Crop’ or ‘Remove’ buttons that are displayed below the text.

The recorder app now also lets you search for specific words and remove them from the transcribed text. This feature will come in super handy for removing words, like ‘uhh’, ‘umm’, and other such crutch words that we tend to use while conversing with others. This is accompanied by a smooth scrolling feature, where the app will mark important words in long transcripts to make it easier for you to see key points while looking back at it in the future.

Google further reveals that you can now share a quote from a recorded interview or a song idea by generating a video clip from the saved audio recording. It can be a boon for someone like me, who can share exact quotes from tech CEOs and innovators on social media in a jiffy. So yeah, the Google recorder app is only becoming better and more useful over time.