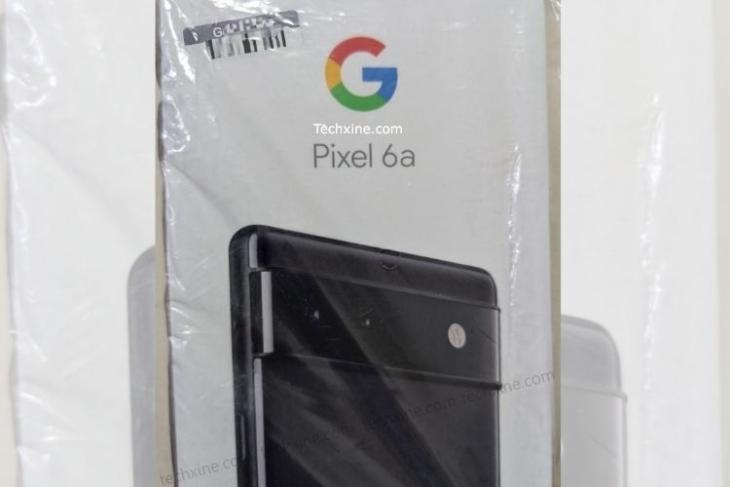 Google’s next “a-series” Pixel phone, which will most likely be called the Pixel 6a, appears in the news from time to time. We recently got to know its possible launch date and now we have a real-life leaked image of the Pixel 6a retail box, which gives us a first look at its design.

The image of the Pixel 6a retail box (courtesy of Techxine) confirms the Pixel 6-like design for the device. For those who don’t know, it is something that has leaked a couple of times in the past. So, we can expect a dual-tone design with a horizontally-placed camera visor – much like the Pixel 6 series. The camera island appears slightly shrunk, though.

The phone on the box is painted in black color but we can expect more colorways at the time of the launch. Other details remain unknown but the front could have a center-placed punch-hole screen.

Besides this, the leaked image of the Pixel 6a box also gives us an inkling that the launch could be near. This points to an announcement at the upcoming Google I/O 2022 devcon, scheduled for May 11-12. But, we have to wait for this to get a better idea. Google is also expected to announce the Pixel Watch, its first smartwatch ever.

As for the specs sheet, the Pixel 6a is expected to be a mid-range phone, much like its predecessor, and might come with the Google Tensor chipset, also seen in the Pixel 6 series. A 6.2-inch OLED display with possible support for a high refresh rate, the presence of Android 12, a 50MP main camera with Samsung ISOCELL GN sensor, a 5,000mAh battery with fast charging support, and more are in tow.

The Pixel 6a India price could be under Rs 40,000, but we don’t know if it will reach India, given that the Pixel 5a didn’t. Since we lack any official details at the time of writing, it’s best to wait for a word from Google to get a conclusive idea. Hence, stay tuned to this space for all the updates you need. Also, do tell us what you think about the Pixel 6a launch in the comments below.