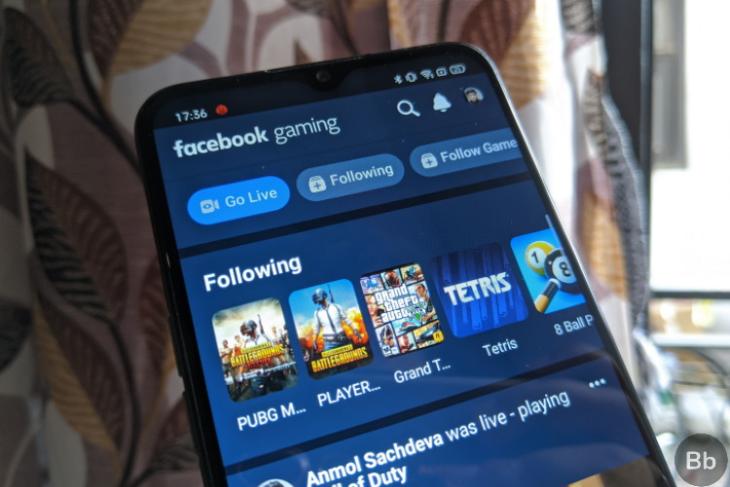 The COVID-19 pandemic has forced people indoors and gaming has now become one of the biggest past times for netizens across the globe. Everyone’s finding new ways to keep themselves entertained and well, Facebook has debuted its own game streaming mobile app called Facebook Gaming…to contribute to the cause.

The Facebook Gaming app allows users to not only watch streams but also broadcast their favorite games and show off their skills. The app went live on Android (Free) just a few hours ago. I briefly tested out the Facebook Gaming mobile app – both watching and streaming games. So, here’s your first look at the app, along with my thoughts on Facebook’s game streaming ambitions:

Right off the bat, the Facebook Gaming app feels a lot like the main Facebook app. You have a huge brand placement, with search, notification, and the profile icons at the top. It is coupled with a four-tab navigation bar, including the feed, instant games, explore, and messaging sections, at the bottom.

You are greeted with a video feed (home screen), which shows popular posts and live streams based on the games you chose on the setup screen. There’s also a carousel of games you follow and a ‘Go Live’ button (more on this below) at the very top of the feed. You can react to these videos, comment, and share them to your timeline – as expected. 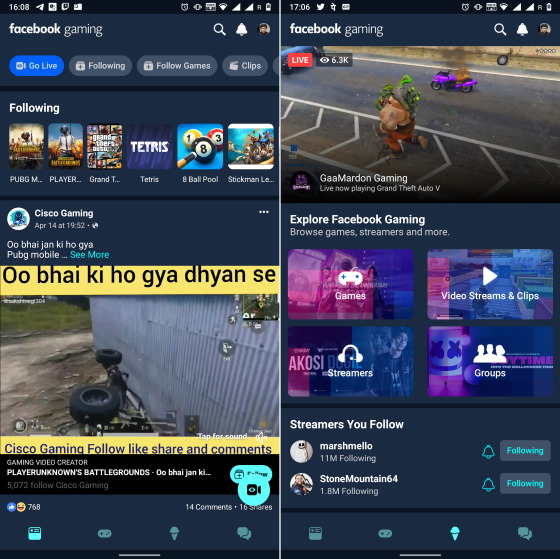 There was an obvious lack of live streams in the feed and it was a bit hard to digest as I went in thinking this is a Twitch rival. And I do spend a lot of time on Twitch daily. The app, however, fulfills this desire of mine via the ‘Explore’ tab. It lets you browse games, video streams, groups, and more for new content. It even suggests you new streamers, group, and games to follow.

There’s also a dedicated games tab in the Facebook Gaming mobile app. It lets you hop into instant games, which you can play inside the app itself, and challenge your friends. This includes all of those casual games including Tetris, Uno, and others that you find on the Facebook website. It’s good for some casual fun but nothing out of the ordinary here. 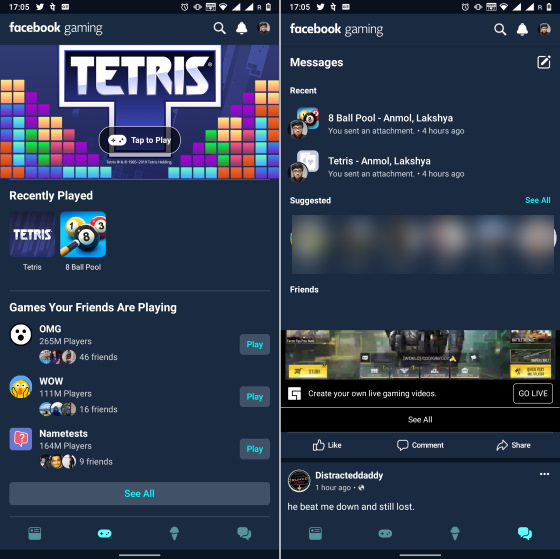 Facebook Gaming keeps the social aspect intact and allows you to invite friends to play games together within the app. Yeah, it’s those casual games such as 8 Ball Pool, Ludo King, and many others. If this is something you are into, the fourth and final messages tab is meant for you.

Just like Twitch, Facebook Gaming also lets you donate bits to creators to support the streams. And help them earn some money in the process. It’s just that Facebook calls its virtual currency “Stars” and not bits. You can attach animated emojis to stars and send virtual gifts to streamers as well. 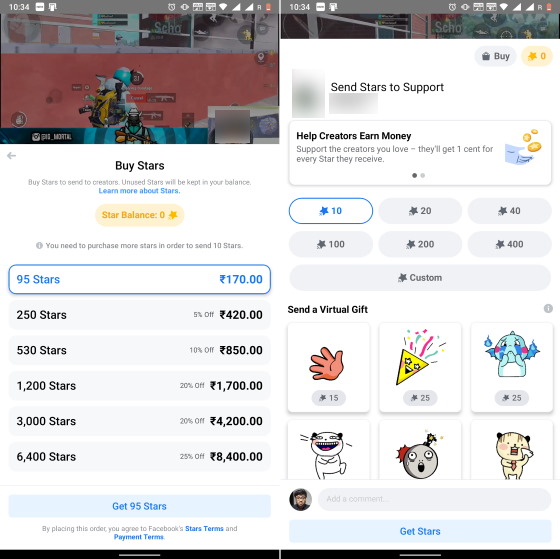 You will have to shell out Rs. 170 to buy a minimum of 95 stars. The payment methods accepted include debit/ credit cards and PayPal, as per the official support page. But, in my brief testing, I could pay for the stars via the Play Store – using UPI address as well. And don’t worry, there’s no expiration date to stars so you can buy them in bulk for future use.

How much does a streamer earn from stars? Facebook Gaming pays 1 cent per star to streamers, so donating 100 stars to a streamer will earn them $1 (around Rs. 75). This is way less when you compare it to Twitch, who also pays 1 cent per bit. But, buying bits is more affordable. Facebook isn’t winning any points here and just seems to be ready to add yet another revenue stream to its name.

The Facebook Gaming mobile app allows you to stream games as well. You don’t need any additional software to record your screen or your face while streaming. The process to start streaming games is super easy too. You simply need to tap on the ‘Go Live’ button at the top, at the bottom left, or from your profile – yeah, it’s everywhere. 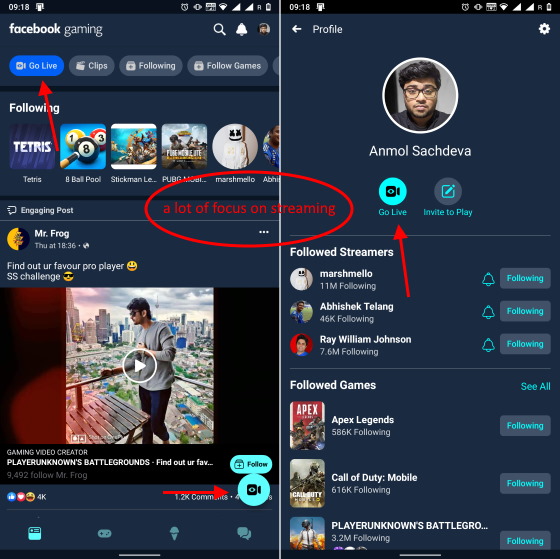 You can choose to record your voice or plaster your face over the stream. That’s totally a streamer’s preference. I was able to stream Call of Duty Mobile (at 720p using Nokia 7 Plus and 960p using the OnePlus 7) with ease using this feature. This is great.

A tiny Facebook Live button will always be seen on the screen, as well as the stream though. It’s really annoying and there’s currently no way to turn it off. The Facebook Gaming mobile app does not include any live stream settings at the moment, which is also a bummer. 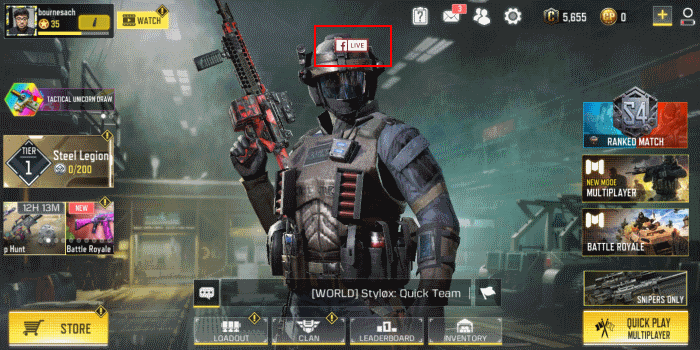 However, Facebook Gaming is just at the starting line and the mobile app can turn out to be a boon for budding streamers. While it’s difficult to find an audience on YouTube and Twitch if you start today, Facebook Gaming could help you pull in viewers a little more easily. At least those in your friends list can tune in to support your stream in the early days as you continue to build an audience.

In its current form, the Facebook Gaming app is lacking – especially for viewers. One of the things that saw several users quit Facebook in the first place was the influx of memes and video content in their feeds. A game streaming platform should primarily focus on live game streams instead of clips, memes, and video compilations.

I mean, live streaming takes precedence. The Facebook Gaming mobile app doesn’t even let you filter the feed only for live streams, which I find to be very disappointing. Even dedicated game pages for, let’s say PUBG Mobile and GTA V, are cluttered with compilations. Live streams are a fleeting sight. Facebook’s website does a better job at showing me live streams, under a separate header.

As you can see in the GIF above, Facebook Gaming is forcing all of this content down your throat on the home screen, dedicated game pages, and everywhere. I merely used the Facebook Gaming app for a couple of hours while working on this article and, as a viewer, I am already sick of it. The app is no fun, frustrating, and doesn’t offer me any incentive over Twitch or YouTube Gaming. I can’t find a good stream and that’s doesn’t bode well for the mobile app.

As for a game streamer, the Facebook Gaming app could exactly be the thing you have been looking for. Mobile gaming is on the rise. So, if you are eager to try a hand at live streaming your PUBG or CODM games, this could be the perfect opportunity. There’s a better chance for new streamers to succeed on Facebook Gaming in comparison to all of its other rivals.

So overall, Facebook Gaming needs to iron out a lot of kinks in the user experience and onboard (attract) viewers to the platform to rival Twitch and YouTube Gaming. Both of them have a massive headstart and Facebook might find it difficult to catch up.