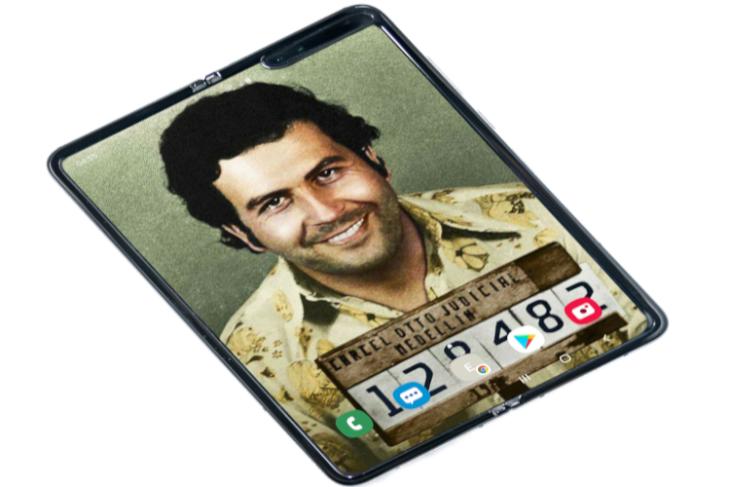 Yes, you read that right. While it was Apple the last time he intended to beat with his “very-difficult-to-break” foldable phone, Samsung is the target for the marketing campaign of Escobar Fold 2. “Rest in peace Samsung, Pablo always wins. This is an incredible phone, at a competitive price”, reads the product description.

In addition, there is a bizarre video titled “www.RIPSAMSUNG.com – Rest In Peace Samsung – Say Hello to Escobar Fold 2” where models destroy a Galaxy Fold with a sledgehammer.

As I mentioned earlier, Escobar Fold 2 looks like a Galaxy Fold and hence, you get similar specifications on the foldable phone. That is, you get the 7.3-inch Dynamic AMOLED display, 4.6-inch secondary display with a 21:9 aspect ratio, Snapdragon 855 chipset, up to 12GB of RAM and 512GB of storage.

In terms of optics, you get a 12MP+12MP+16MP triple rear camera setup and a dual 10MP+8MP setup on the front. It draws juice from the same 4,380 mAh Li-Po battery as seen on the Galaxy Fold.

“My goal is to become the overstock kingpin of electronical devices this year. All these factories simply have too much technology laying around, nobody is buying anything in China from secondary factories. We cut the prices and give clients direct discounts under the Escobar brand umbrella.” said Roberto De Jesus Escobar Gaviria in a press release.