Android smartphones have never really been known for stellar software support. Most Android phones get up to 2 years of software updates, some even get just 1 major update in their entire life-cycle before they are forgotten by the OEMs, and abandoned to lie forever in the wasteland that is older Android versions.

iPhones, on the other hand, have always had an excellent record with software updates. Apple’s claims about putting the consumer first may sound a lot like brain-washing and tall-claims, but the Cupertino giant has never faltered in its quest to push out software updates to as many devices as it possibly can. I’m talking, of course, about the recently announced iOS 12, and the not-so-recently-announced Android Oreo.

It Always Begins at WWDC

Every year, without fail, Apple takes the stage at its World Wide Developers’ Conference and pokes fun at the miserable adoption rate of the latest iteration of Android. It’s usually Craig Federighi taking the mickey out of Android OEMs, and while most Android users see this as Apple’s way of showing Android down, believe me, it’s really not. Heck, Apple doesn’t need to show Android as a low-grade OS when it comes to adoption ratio, and the sort of support Android makers offer their customers. 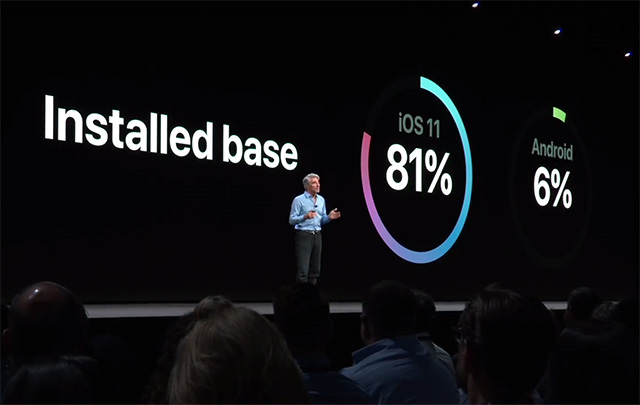 This year too, at WWDC 18, the figures were as skewed as they’ve always been. iOS 11 has been installed on a whopping 81% of all iOS running devices; and where does Android stand? A meager 5.7% of Android devices are running Android Oreo. Yes, 5.7%. Apple may have been kind and rounded it up to 6% at the keynote, but it’s 5.7% by Google’s own numbers and it’s consistently been this bad for the Mountain View giant’s smartphone OS.

Too Many Android Devices? Your Argument Is Invalid

The most common argument that Android fanboys use to justify this skew in numbers is “there are simply too many Android devices, and Apple only makes flagships.”

It’s true, obviously. Apple only makes flagships, and there really are a maddeningly large number of Android devices across all price ranges out there. So let’s look at just the flagships.

iOS 12 is coming to almost every iOS device imaginable. The oldest iPhone that will be receiving the iOS 12 update is the iPhone 5s. Yeah, you read that right. A five year old iPhone will be getting support for the latest iteration of iOS. 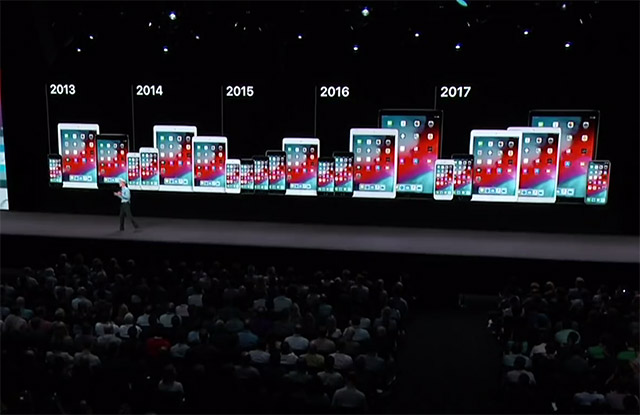 When the iPhone 5s was launched back in 2013, it had some really big competitors out there from every major Android player in the market. There was the Galaxy S4, the LG G2, the Galaxy Note 3, the HTC One, the Nexus 5, and the Xperia Z. Let me take that veil off your eyes and show you exactly where those flagship smartphones from Android OEMs ended up.

The Galaxy S4 was launched in 2013, same as the iPhone 5s, and it came with Android 4.2.2 Jellybean out of the box. In 2014, Android 5.0 (Lollipop) was released, and true to the ‘flagships obviously get upgrades’ philosophy the Galaxy S4 received an update. Then Android 6.0 Marshmallow came out, Android 7.0 Nougat came out, Android 8.0 Oreo is here now, and the Galaxy S4 didn’t receive any one of those upgrades… not officially at least.

That’s probably because Samsung launched the Galaxy S5, and wanted people to buy that shiny new phone with its infamous band-aid design back. Whatever the reason may have been, the Galaxy S4 lay abandoned just one year into its life.

The HTC flagship from 2013, is yet another example of how flagship phones will obviously get longer support from OEMs. The HTC One came with Android 4.1.2 Jellybean out of the box, and the last official update it received was Android 5.0 Lollipop. In 2014.

The Nexus 5 was also released in 2013, packing Android 4.0 Ice Cream Sandwich, and it got updated to Android Marshmallow. It’s not nearly as bad as what other flagship smartphones of the time were, and that’s thanks to the fact that it’s a Nexus device so it got a little extra in the way of Android upgrades. Still though, Marshmallow was released in 2015, and that’s not too good.

Yet another flagship from 2013, the Xperia Z from Sony also came out with Android 4.1.2 Jellybean back in the day and was later updated to Android 5.1.1 Lollipop. Since then? Well, while independent developers and ROM builders may have extended unofficial AOSP ROMs for the Xperia Z (and other phones in the list), but officially the Xperia Z was abandoned by Sony.

Later in 2013, Samsung also released the Galaxy Note 3 — a trend that is still very much in play — and the device came with Android 4.3, to be updated as far as Android 4.4. The Note 3 had some pretty decent hardware for its time, and Samsung could have (and should have) supported it for longer than that meager time that it was supported for.

LG’s flagship from 2013 — the LG G2 — also came out with the latest and greatest Android version of its time — Android 4.2.2 Jellybean. The flagship smartphone was later updated as far as Android 5.0.2 — not a great record by any means, heck not even a decent one, but better than the Note 3 at the very least.

It’s a very easily observable trend among Android smartphones to get software support for no more than a year, or maybe two at max. Now, you may claim that people usually switch phones in a year’s time anyway, and you, dear reader, would be wrong.

According to Google’s stats, a majority of Android smartphones are running Android Nougat (31%), followed by Marshmallow (25.5%), followed by Lollipop (22.4%), followed by KitKat (10.3%) — that obviously implies people are sticking with their phones even when they’re way older than one year. Also note that Android Oreo is on 5th place with 5.7% phones running the software.

you may claim that people usually switch phones in a year’s time anyway, and you, dear reader, would be wrong

That’s really not how software updates are supposed to work, and honestly there’s something incredibly wrong with the way Android makers are handling updates.

Things haven’t really improved with time for Android flagships. Here’s a list of smartphones that were released in 2016 and 2017 along with the Android version they were launched with, and the latest update they received. I’ve also added the time difference between the Oreo launch, and the day when these phones received the Oreo update (where applicable). Check it out:

As you can see, flagships from 2016 and 2017 are getting Android Oreo, but they’re getting it months after the OS was officially released. Other than the OnePlus 3T, and the Xperia XZ, all other phones have taken 5 months or longer to get the Oreo update. In fact, the Moto G5 Plus is still waiting on Oreo, and is expected to get it next month, in July 2018.

What’s more is that none of the 2016 flagships will get updated to Android P, other than the Pixel, and that’s just sad. Android P is the Android update from 2018 and it should be made available to smartphones that are less than 2 years old at this point.

By now, I’m pretty sure the only argument remaining would be that after the absolute dumpster-fire that iOS 11 was, how can a 5 year old iPhone even begin to handle iOS 12, and that’s where Apple’s absolute control over its hardware and software shows its merits.

Apple, thanks to the fact that it knows exactly the devices the OS is supposed to be working on, can optimize it that much better for its devices. At WWDC, when iOS 12 was announced, Apple specifically mentioned that older iPhones will play well with iOS 12. Now I won’t lie to you, I doubted the claim, especially after having suffered with iOS 11 on an iPhone 6S, but I installed the iOS 12 Developer Beta on my iPhone 5s, and it looks like the company wasn’t lying about the improvements. Apps open faster, the camera loads up quicker, the keyboard, the control center, the animations, everything is just better with iOS 12. Keep in mind that this is a Developer Beta, not even the Public Beta, so I’m pretty much expecting a good future for iOS 12.

So yeah, you may argue that iPhones are inherently way more expensive than most flagships of their time, but there’s no denying that for the price, Apple does offer incredible software support, and gives you the ability to use your iPhone for far longer than you’d be able to use an Android phone.

The State of Android: It’s Getting Screwed, and Project Treble Is Our Only Hope

I’m pretty sure Google has recognized this, for the lack of a better word, train-wreck that’s Android updates across the ecosystem. After all, the company announced Project Treble with the sole intention to make rolling out Android updates easier and faster, and a lot of companies are getting on board Treble now, so maybe we can expect better software support on Android soon, too.

At the very least, however, I expect Google’s Pixel devices to get a software lifecycle that’s longer than the 3 years that Google currently guarantees. It shouldn’t be this hard for a company to support its flagship devices for a longer period of time.

Don’t get me wrong, I’m not telling anyone to not buy an Android phone. If you want an Android phone, by all means, go out and get it. Hell, I’m using an Android phone right now too. The point of this entire article was to emphasize how terrible the state of Android updates currently is. In that way, Apple’s consolidated lineup of devices is a much better way for the company to offer its customers the best possible software support.

Well, here’s hoping Project Treble turns out to be the savior that Android so desperately needs to get updates rolling out quickly and smoothly. With Android P, things are looking better already with a number of third-party companies pushing out Android P Developer Previews to their flagship smartphones, and maybe we can expect Android to slowly, but surely get to a stage where within a year of its launch, 81% of Android smartphones are running the latest software. I’ll keep my fingers crossed till then.