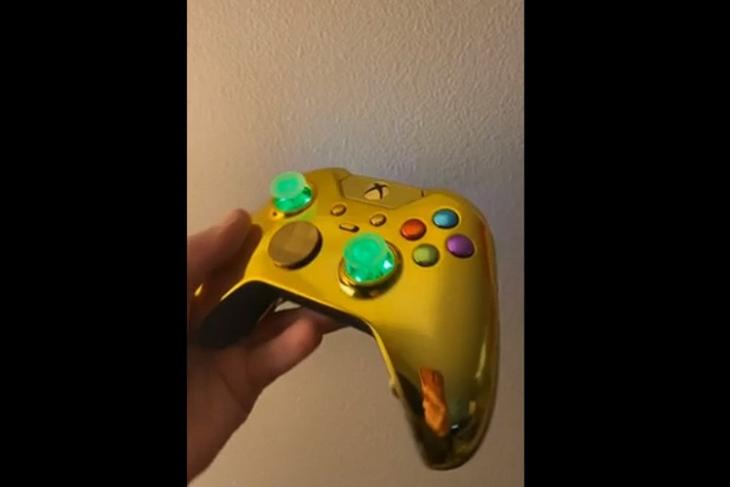 Over the past few months of Coronavirus lockdowns, we have seen several Redditors get creative in their homes. We saw one Redditor replace the glass panel of the Surface Duo with an aluminum one, and saw another make a rotating dock for an iPad. Now, a Redditor has turned a traditional Xbox Elite wireless controller into Thanos’ universe-destroying Infinity Gauntlet…well, kind of.

Dubbed as the “Infinity Gauntlet Elite Controller”, it is actually an Xbox Elite wireless controller with a shiny golden faceplate and a couple of LED lights. The Redditor, known as u/mike24jd, shared a post on the r/xboxone subreddit showcasing his creation.

I wired in 2 sets of LED lights to make this Infinity Gauntlet Elite Controller! from xboxone

Now, as you can see in the video, the controller looks pretty Infinity Gauntlet-y with the full-gold design, the infinity stone-colored buttons, and the LED-lit thumbsticks and trigger buttons. Personally speaking, it looks kind of tacky, but so did the Infinity Gauntlet (Sorry, Marvel!). However, being a Marvel fan myself, I wouldn’t say no if someone sends this to me.

Moreover, the creator did a lot of work and spent some extra bucks to give the controller this make-over, and it was not that easy.

So, that makes it a total of around $65 (~Rs 4,825) on top of the controller’s expensive price tag. Apart from that, he also had to fit the LED lights inside the controller and connect the wires properly to make them blink underneath the trigger buttons and the thumbsticks. However, the creator did say that he enjoyed the lot making this custom controller all by himself.