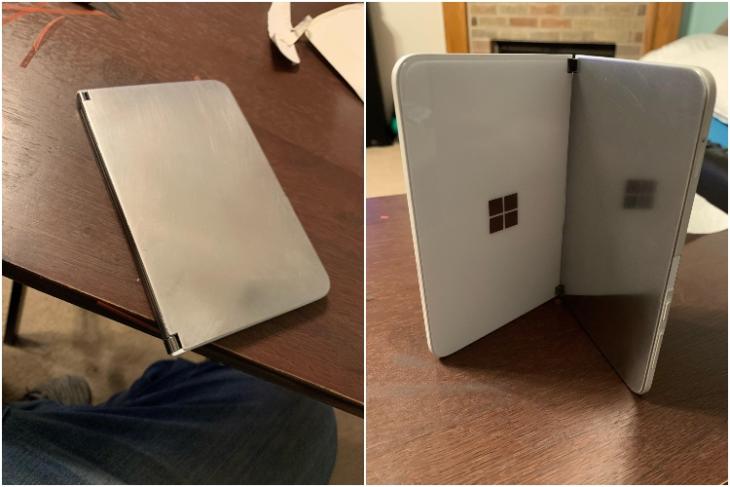 After several leaks and a lot of anticipation, Microsoft finally launched its dual-screen mobile device, the Surface Duo, a few months back. The device got a lot of praise for its sleek glass design and the revolutionary hinge. However, as glass is glass, and glass cracks, it makes the Surface Duo a pretty fragile device. So, after the Surface Duo of a Redditor took a fall and cracked, he tried to replace the entire outer glass cover with a metal one and it actually worked.

Although we have seen many Redditors get creative in the past few months, none of them did as much work as u/WALLY_MAMM0TH. The guy dropped his Surface Duo two days after getting it and cracked the outer glass. Initially, he used vinyl to cover up the cracks on the glass. However, later on, he went on to try his hand at replacing the entire glass panel with an aluminum one to make the device more sturdy.

He recently shared his final creation and some glimpses of the replacement process on the r/surfaceduo subreddit. You can check it out via the link below.

Lots of skins, but how about a full glass replacement. from surfaceduo

“Took some measurements, sketched it up in fusion 360, exported to silhouette studio for the stencil. Cut it out of some thin aluminum cleaned it up a bit and bam, an aluminum back glass Replacement. Still have full folding function, no signal loss, and I kinda think it’s helped with the dispersion of heat (but that may just be a pseudo effect),” wrote the Redditor in a comment.

Now, as you can imagine, it surely wasn’t as easy as he made it sound in his comment. Aside from all the physical labor, the man said that it took a lot of patience out of him, especially when he was removing the shattered glass piece-by-piece.

“I pain stakenly took the damaged back glass off piece by piece using a razor blade and tons of patience,”, he further added.

So, if you have a Surface Duo with a shattered glass panel and are planning to replace it yourself, then do keep in mind that you need the necessary expertise and a lot of patience.