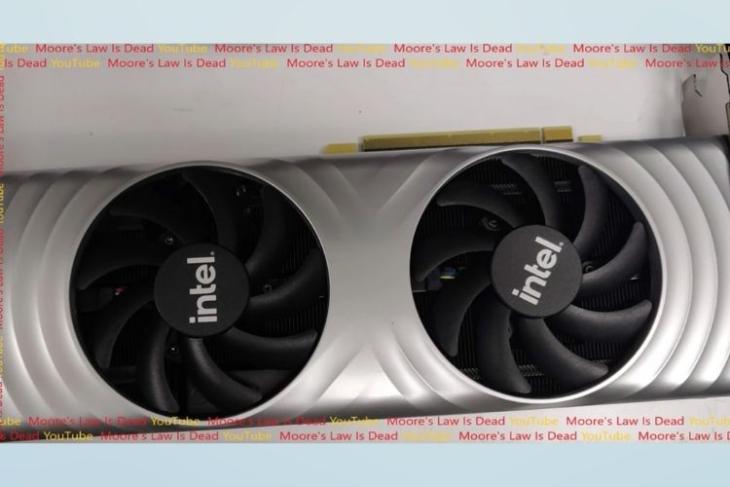 Earlier this year, Intel announced that it will launch its first-ever high-performance GPU series, the Intel Arc series, in 2022. Following the announcement, although we have seen the expected prices of the upcoming GPUs, we have not seen how Intel’s graphics cards might look like, until now. A tipster has now shared real-life images of Intel’s upcoming Alchemist series GPUs in a recent YouTube video, and you can check them out in this story.

The images of the Intel Arc GPUs were recently shared by the YouTube channel Moore’s Law is Dead (MLID). The YouTuber also revealed some key details about both the high-end Intel Arc Alchemist GPU, which is the 512 EU (Execution Units) model, as well as the entry-level 128 EU model. You can check out the images of the front and back of the high-end model attached below.

The above images reportedly showcase the final shroud design of the Intel Arc Alchemist GPU. It looks pretty sleek, with a silver and black color scheme, and features a dual-fan design to battle thermal issues. These two 9-blade fans also come with an Intel branding and the connectors are now on the side of the card, along with the 8+6 pin configuration that has a maximum power withdrawal capacity of 300W. Moreover, the tipster also mentioned that Intel’s high-end GPUs might come with 32 Xe Cores.

Furthermore, the YouTuber also shared the images of the entry-level model of the Intel Arc Alchemist GPU (images below). The 128 EU model comes with a single-fan design. The lower-end model will likely feature 8 Xe Cores, a single 6-pin connector, and a similar silver-colored shroud design like its elder sibling. It is expected to compete with Nvidia’s GTX 1650 Super.

So, these are some of the key details that you should know about Intel’s upcoming Arc GPUs. The chipmaker is expected to initially release the Alchemist family of graphics cards in early 2022, followed by the Battlemage series, Celestial series, and Druid series in the latter half of the next year.