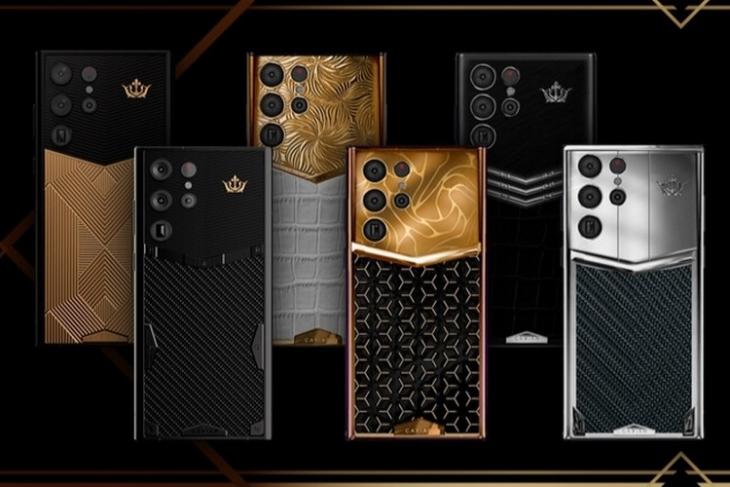 If you are into super-expensive customized gadgets, I’m sure you have heard a thing or two about the Russian luxury brand Caviar. We have seen the company release some extraordinarily expensive iPhones and PS5 consoles with premium customizations in the past. Now, Caviar has launched its limited-edition collection for the Samsung Galaxy S22 series with a starting price of $5,920 (~Rs 4,48,000). Have a look!

Samsung launched its Galaxy S22 series in the global market recently. However, Caviar was quick enough to launch its customized Galaxy S22, S22+, and S22 Ultra models in a variety of designs, involving premium materials like 24K gold, lightweight titanium, and carbon fiber.

There are six designs under Caviar’s latest Galaxy S22 series, each with its own unique inspiration and look. These include – Bird of Prey, Ocelot, Drive, Great Gatsby, Victory, and Titanium.

The Galaxy S22 Drive collection, on the other hand, sports a carbon fiber back with a black titanium frame. It takes inspiration from high-speed, racing cars from the 1920s and 30s. The Great Gatsby comes with geometric patterns on its gold-plated alloy-based back panel.

The other two designs, Victory and Titanium, feature black crocodile leather and automotive carbon, respectively. Caviar will make 99 Galaxy S22, S22+, and S22 Ultra models for each of the designs to retain exclusivity and start shipping orders from March 11.

Now, it is worth mentioning that Caviar only makes physical changes to the devices to make them look one-of-a-kind. Under the hood, you will get the same specs and features as the standard Galaxy S22, S22+, and S22 Ultra devices. While the Galaxy S22 and the S22+ do not come with the S-Pen, the Galaxy S22 Ultra will come with a design-matching, customized S-Pen.

Caviar’s Overphone Concept Envisions the Smartphone of the Future