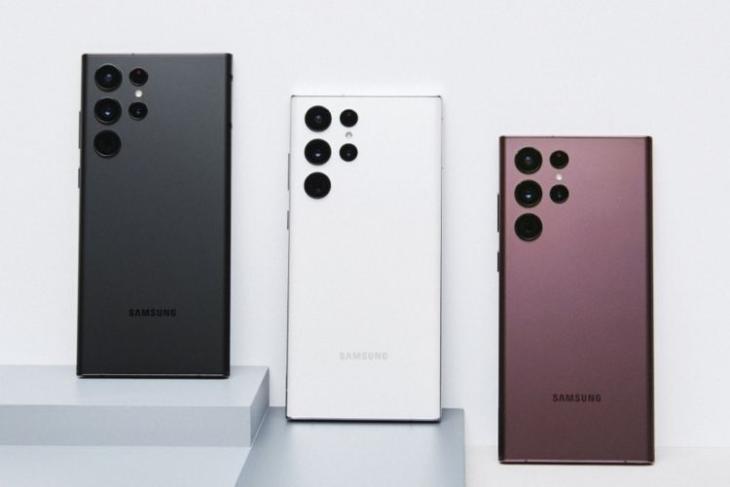 Samsung has finally released the Galaxy S22 series we have been waiting for at this year’s first Galaxy Unpacked event. As expected, the 2022 flagship lineup includes the Galaxy S22, the Galaxy S22+, and the Galaxy S22 Ultra to succeed last year’s Galaxy S21 smartphones. Here’s a look at all the details you should know.

Let’s start with the eldest of them all: the Galaxy S22 Ultra. The smartphone is an amalgamation of the Galaxy S and the Galaxy Note series, taking both the series’ features. While focusing on the cameras and the performance, the smartphone has the Galaxy Note’s S Pen, which this time, has a dedicated slot. To recall, the Galaxy S21 Ultra, which was the first Galaxy S phone to get a stylus, didn’t have one. The S Pen ensures around 70% lower latency as compared to the one found with last year’s S21 Ultra.

This is reflective in the design too. The phone gets a Note-like boxy design but features a rear camera hump akin to the Galaxy S21 phones. It has a metal frame and features a glass and haze finish and is available in four attractive colors: Phantom Black, Phantom White, Green, and Burgundy.

The S22 Ultra has a big 6.8-inch Edge QHD+ Dynamic AMOLED 2X display, which supports a 120Hz refresh rate, a 240Hz touch sampling rate, and a peak brightness of 1,750 nits. It comes in both Exynos 2200 and Snapdragon 8 Gen 1 chipset variants, both of which will be available in different regions. It is paired with up to 12GB of RAM and 1TB of storage, which makes an entry after a couple of years.

The camera department, much like the previous Ultra models, boasts some impressive features. There are quad rear cameras, including a 108MP main camera with OIS, a 12MP ultra-wide camera with 120-degree FOV, and two 10MP telephoto lenses with up to 10x optical zoom. The front camera is rated at 40MP, much like its predecessor. There are various attractive camera features in tow too, including an advanced night mode, advanced Super Clear Glass lens for flare-free shots, 100x zoom, access to the Expert Raw app for in-camera editing tools, and loads more.

The device, much like its massive screen space, has a big 5,000mAh battery, which was also seen on the S21 Ultra. However, this time, it supports 45W fast charging. It runs Samsung One UI 4.1 based on Android 12.

The Galaxy S22+ is the middle child of the series and comes with a few changes. For starters, it looks just like the Galaxy S21+ and features a Contour-Cut design. It packs a slightly smaller 6.6-inch Full HD+ Dynamic AMOLED 2x display. It supports a 120Hz refresh rate, a 240Hz touch sampling rate, and a peak brightness of 1,750 nits. The SoC variants remain the same for it. It comes with up to 8GB of RAM and 256GB of storage.

As for the camera, there are some tweaks over here too. The S22+ has three cameras at the back, including, a 50MP main camera with OIS, a 12MP ultra-wide camera, and a 10MP telephoto lens, along with a 10MP front camera. While having camera features similar to the Ultra model, the S22+ supports Portrait mode photos with the new AI Stereo Depth Map for better details.

It is backed by a smaller 4,500mAh battery also with support for 45W fast charging and 15W wireless charging. It also runs One UI 4.1 based on Android 12, has support for 5G, features an Ultrasonic in-display fingerprint scanner, IP68 rating, and more. There are four colors to choose from, namely, Phantom Black, Phantom White, Green, and Pink Gold.

The Galaxy S22 is the youngest one in the lineup and gets the most changes. The phone sports a 6.1-inch Dynamic AMOLED 2X screen with a Full HD+ screen resolution, which is the smallest as compared to the other models. The phone also comes with a 120Hz refresh rate, a 240Hz touch sampling rate, and a peak brightness of 1,300 nits. It packs a smaller 3,700mAh battery, which supports 25W fast charging, unlike the S22+ and the S22 Ultra. It also comes with up to 8GB of RAM and 256GB of storage.

Galaxy S22 series is made up of a special material that uses recycled fishing nets to address the issue of ocean pollution and help towards a sustainable environment. All the phones come with a promise of four years of Android OS updates, as rumored previously, a layer of Corning Gorilla Glass Victus, and Knox Vault support for enhanced security.