While several Android skins already come with a built-in screen recorder, they lack some advanced features. For example, native screen recorders don’t let you adjust the frame rate or bitrate, add a selfie camera to the recording, choose a higher resolution, record internal audio, and more. If you are someone who wants all these features, then you have come to the right place. In this article, we bring you the 10 best screen recording apps for Android. We put special emphasis on screen recorders that don’t show too many ads, support internal audio, don’t add a watermark, and feature a light video editor, among other things. So without any delay, let’s check out the best apps for screen recording on Android.

Here are the 10 best screen recording apps for Android and all of them are available for free. They will let you choose the frame rate and audio source, be it the microphone or internal audio. You can expand the table below and move to the app of your choice with ease. 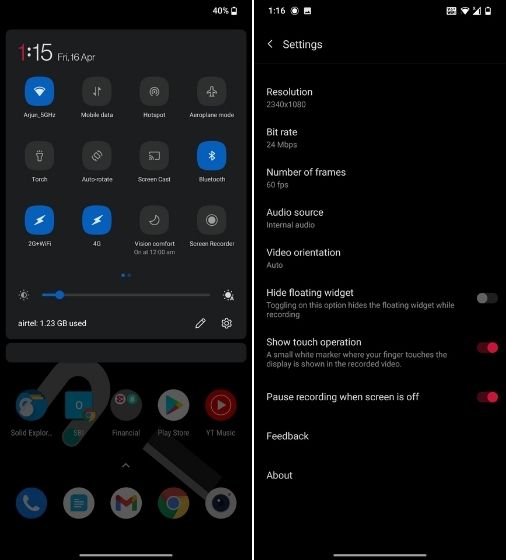 When it comes to the best screen recording apps for Android, I always suggest Screen Recorder by Kimcy929. It is an ad-free screen recording app that offers many great features for free. To start, it lets you record with a resolution from 240p to 4K, bit rate from 2 Mbps to 60 Mbps, and frame rate from 24 FPS to 120 FPS. It also lets you record touches and any external audio, along with allowing you to set the audio bit rate up to 320 kbps. Not to mention, if you are on Android 10 or above, then you can also record the internal audio. 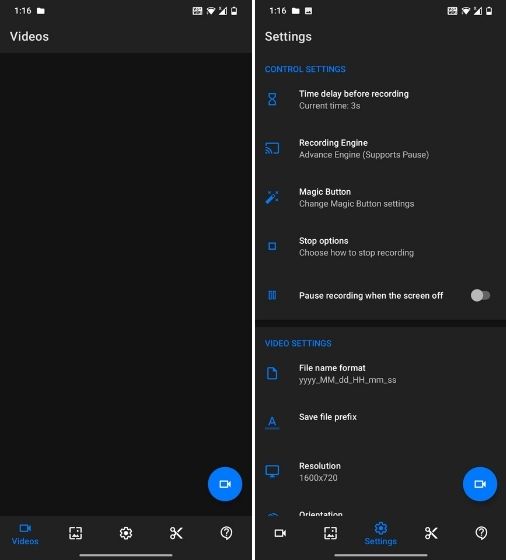 The app comes with a useful feature called Game Launcher. Here, you can add the games you have installed on your phone and then launch them directly to record their gameplay. That makes it one of the best screen recording app for gaming, be it PUBG or Call of Duty Mobile, on Android. To let you edit your recordings, you get a video trimmer with the ability to add text or a logo.

With that said, my favorite feature of the app is that it adds a toggle to the quick settings panel allowing you to initiate screen recording with just a tap. All you need to do is edit the quick settings page to make it easily accessible, and that’s all. This feature alone makes it one of the best recording apps for Android on the Play Store.

AZ Screen Recorder is a well-known screen recorder for Android. You probably would have already heard of it. AZ Screen Recorder provides a lot of settings and features for recording your phone’s screen. The similarities include a selection of resolution from 240p to 1080p, bit rate from 1 Mbps to 12 Mbps, frame rate from 20 FPS to 60 FPS, recording external and internal audio, touches, and setting a countdown of up to 60 seconds. 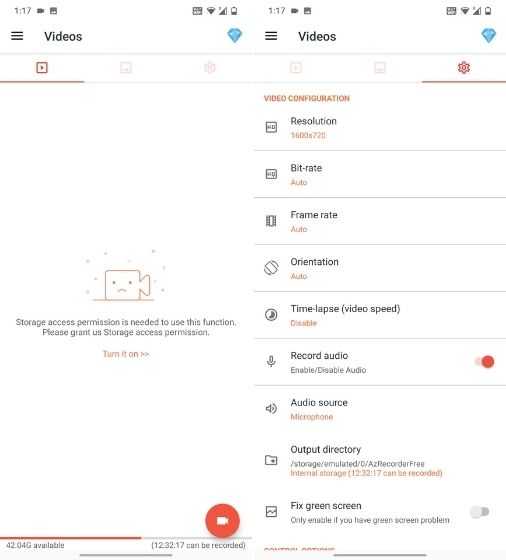 Apart from this, you can create a time-lapse video of your screen – ranging from 1/3rd speed up to 3x speed. Finally, in the app settings, you can configure multiple ways to stop the recording, like shaking the phone or turning the screen off.

You also get features such as merging videos, replacing the audio in the recording with custom audio, adding text to videos, exporting in GIF, etc. There is a premium version available as well that can be bought as an in-app purchase to unlock more features. I would recommend the premium version if you don’t want to experience ads while using the app.

InShot, which we have mentioned in our list of best Instagram Reels video editors, also has a popular and feature-packed screen recorder app on Android. It offers seamless controls that are pretty easy to use. The app comes with a paint tool that allows you to mark areas on your screen while recording the screen. This feature makes it one of the best Android screen recording apps on the market. 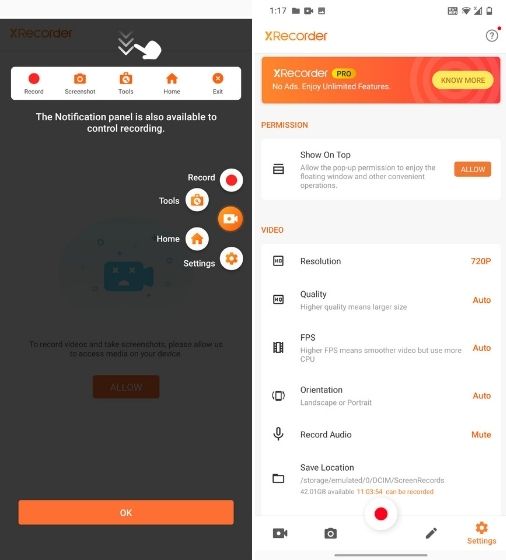 Coming to the features, you will also find that it gives you complete control over the recording quality. If you want a smaller video file, you can record the video at a lower resolution and bitrate. You can also go as high as 1080p and 60FPS. Not to mention, there is support for multiple audio sources as well. Overall, XRecorder is one of the best screen recording apps for Android, and you should check it out right away.

Like most screen recording apps, Mobizen Screen Recorder offers many great features that make it a worthy screen recording app for Android smartphone users. With this app, you can choose any resolution from 240p – 1080p, bit rate from 0.5 Mbps to 12 Mbps, and frame rate from 5 FPS to 60 FPS. It may not come as a surprise to see options such as a video editor, touch recording, countdown, and face cam as well. 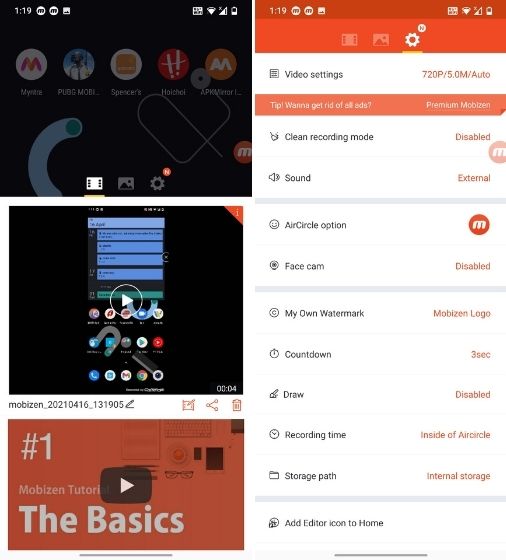 The app has a Clean Recording mode that, as you may have guessed, produces a screen recording without the watermark, air circle, and timer. When this mode is off, you can replace the Mobizen watermark with a custom one. Also, you can view the recording duration to keep track of time. Though all the features of the app are free, you may often see ads within the app. But you can remove these ads by buying the premium version.

Screen Recorder V bears similarity to AZ Screen Recorder, especially in the settings it has to offer. It is also wildly popular on Android, with more than 50 million installs. The app lets you record your screen with a resolution that can range from 240p to 2K, bit rate from 2 Mbps to 15 Mbps, and frame rate from 24 FPS to 60 FPS. 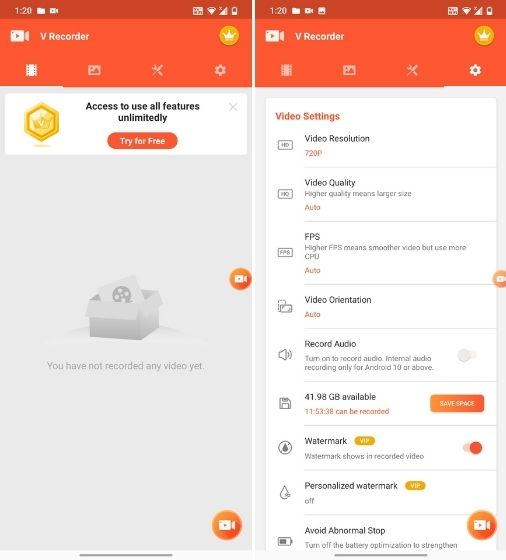 Keep in mind, screen recording at 1080p and 2K is available only to paid users. Besides that, the app allows you to include touch gestures and add a countdown of 3 seconds before starting the screen recording. And it goes without saying that it can record both external and internal audio, given that you are on Android 10 and above.

The screen recordings from this Android app do not contain a watermark, so you don’t need to be concerned about that. However, if you wish to include a logo in your recording, this app allows you to do just that by selecting an image from your device. Finally, you can stop the recording either from the notification drawer or from the overlay toolbox.

With Vidma Screen Recorder, you get a lot of advanced options and for free. The free version of the app offers custom resolution up to 1080p, custom bit rate, a predefined countdown timer of 10 seconds, and the option to include both internal and audio from the microphone. You also get access to advanced features, like shaking your device to stop the recording, hiding the ongoing notification, showing touches, customized timer, presets, and more. 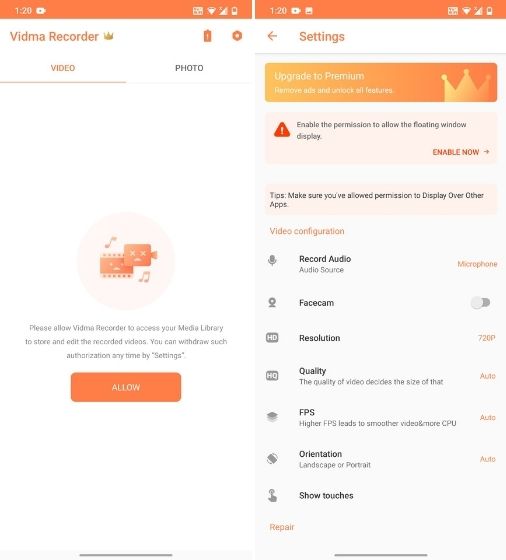 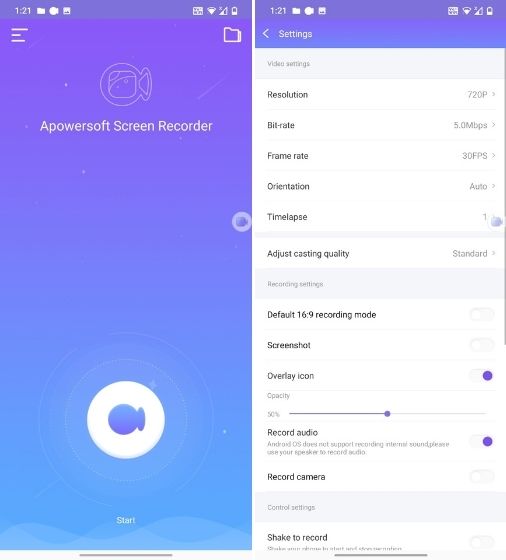 The recordings can be given a prefix name in the app settings to make them easier to locate in the phone’s storage. To minimize the clutter in your recorded video, you can also change the size of the floating icon. The app also lets you capture touch gestures, which is pretty good. With that said, the Apowersoft screen recorder lacks a basic feature, and that could be a dealbreaker. You can’t record the internal audio on Android 10 and above.

If you are looking for an Android screen recorder for gaming or live streaming, then Omlet Arcade is perhaps the best app out there. It has integration with YouTube, Twitch, and more. The app supports screen recording of games such as PUBG, Call of Duty, Among Us, Fortnite, etc. Remember, it does not allow you to customize the streaming settings. 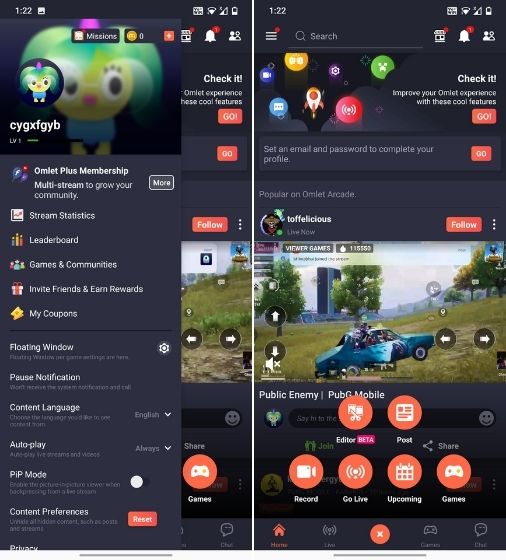 Based on the internet speed, it can automatically switch to lower or higher resolution and frame rate. Moreover, it supports audio recording both from an internal source and microphone, which is what you need while gaming. To sum up, if you are a gamer, Omlet Arcade is the best screen recording app for you.

Most of the Android devices already come with the Google Play Games pre-installed. In case your device didn’t, I would highly recommend you to download it. Though it may not allow you to record everything on your Android device, it has a built-in screen recording feature. It enables you to screen record any game available on the Play Store along with a face-cam. 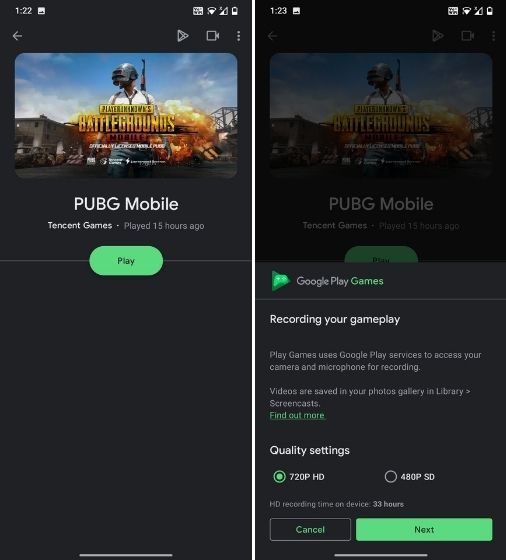 To record a game, search for the game in Google Play Games, tap on the recording icon at the top-right corner, and select the video quality. You can choose from either 480p or 720p resolution. Next, the app will ask you to launch the game, after which you can start the recording.

Go Ahead and Use the Best Screen Recording Apps