Note: OnePlus (Parallel Apps), Xiaomi (Dual Apps), Realme (Clone Apps), Vivo (App Clone), and Samsung (Dual Messenger) offer their own versions of app cloning feature. You can try it out before trying a third-party app if you want. Launch the Settings app, search for the feature by name and proceed from there.

Apps like Parallel Space are a boon for users who want to run multiple instances of the same app. For example, I use the cloning feature to run two WhatsApp accounts on the same phone. And since my phone supports Dual-SIM technology, I don’t have to carry an extra phone. Many people use such apps to create a hidden file system for their private files, while others use them to keep their work and private life separate. There are many use-cases, and you can be as creative with these apps as you want. With that said, let’s get to our list, shall we?

One of the best app cloning app that can replace Parallel Space for you is “DO Multiple Accounts”. The USP of this app is that it allows you to create more than two spaces. That means if you want, you can run three instances of the same app. Whether you want to create multiple accounts for your favorite chat application or run multiple instances of social media accounts like Facebook, this app will let you do that. I also love that the app gives you notification control over the cloned apps. So, if you want to keep an app private, you can disable notifications for that app. 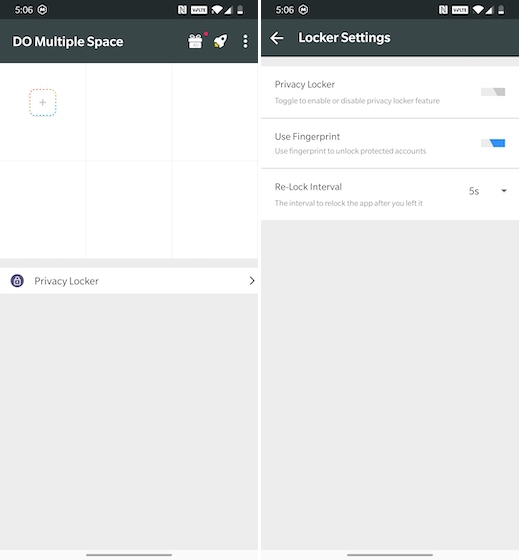 It also brings a built-in privacy locker that lets you hide the cloned apps behind a password. The app is also light on resources so it doesn’t drain the battery as quickly as Parallel Space. Other features include support for Google Play Services, multiple game accounts, one-tap swathing between spaces, and more. DO Multiple Accounts is good, and it’s one of the best Parallel Space alternatives that you can use right now.

Clone App is another good Parallel Space alternative that you can use to clone apps. The best thing about this app, apart from its primary function, is that it doesn’t show any ads. Even if you are using the free version, there are no ads to spoil your experience. Like Parallel Space, you can use this app to clone apps to manage multiple accounts on the same phone. I also love that it brings special support for WhatsApp and allows you to use colorful skins. 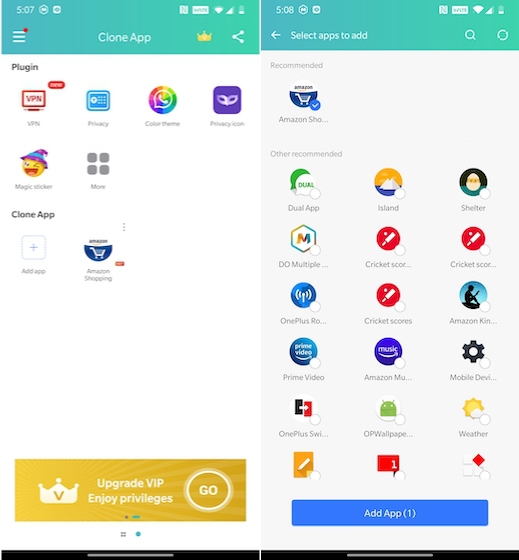 The app supports both 32-bit and 64-bit apps, so no apps are left behind. It comes with a built-in VPN for enhanced privacy. That being said, the VPN is not that good, you will be better off using any one of the dedicated free VPN apps. Other features of the app include, support for space themes, emoticons, and more. This is a good app for cloning your chat and social media application. Note that in my testing, it didn’t work well with games.

Island, while still in “Early Access” is a capable app that can replace Parallel Space for you. It’s developed by Oasis Feng, who is also the developer of Greenify (free), a popular power and resource management app for Android. The developer is known for his stance on privacy, so you can be assured that your data will be safe. Talking about the features, Island brings most of the features that you can expect from an app cloning app. You can isolate apps for privacy protection, clone apps for running multiple accounts, and freeze apps to completely block their background behaviors. 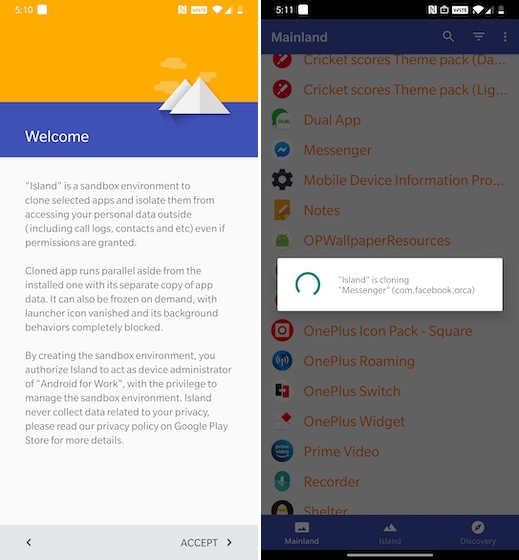 Using these features, you can run multiple instances of the same apps, safeguard your data, and ensure that power-hungry apps don’t eat your battery. The app uses the built-in work profile feature of Android to create a space for you. So, you will miss out on the password protection feature to hide the cloned apps. You can hide the apps, but you cannot put them behind a vault. Anyway, you can also use an app locking app to create a vault yourself if you need to have it. Apart from that, it’s best for running cloned apps while maintaining data privacy.

Dual Apps is a popular app cloning app that you can use to run manage multiple accounts of the same on your Android device. The app promises to bring enhanced privacy and runs clone apps without leaving a trace on your primary space. You can also use it to make your space private and hidden. That means only you will be able to access that space. Apart from social accounts, the app also supports the cloning of gaming apps with support Play Store services. When you use this app, both the accounts will remain online all the time. You can also choose to hide notifications of the hidden apps, thus furthering the privacy of your apps. Overall, it looks like a good Parallel Space alternative, and you should try it out. 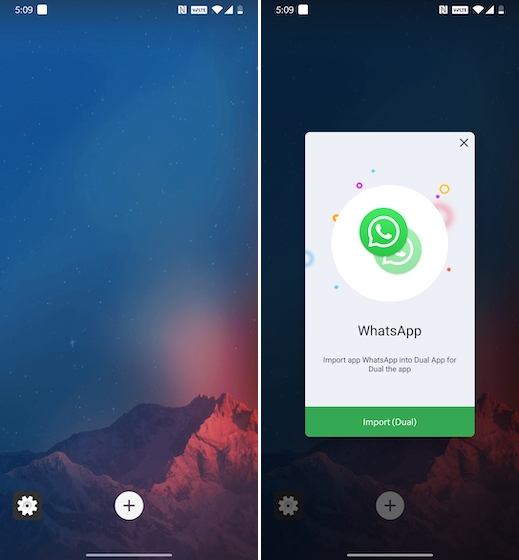 If you don’t trust private companies with your data and want an open-source Android app to replace Parallel Space, you should download Shelter. Shelter is a free and open-source app that leverages the “Work Profile” feature of Android to provide an isolated space where you can install cloned apps. This is a great app for people who want enhanced privacy. Using this, you can run all the data collecting apps like Facebook in a container, where they cannot access your data outside your profile. 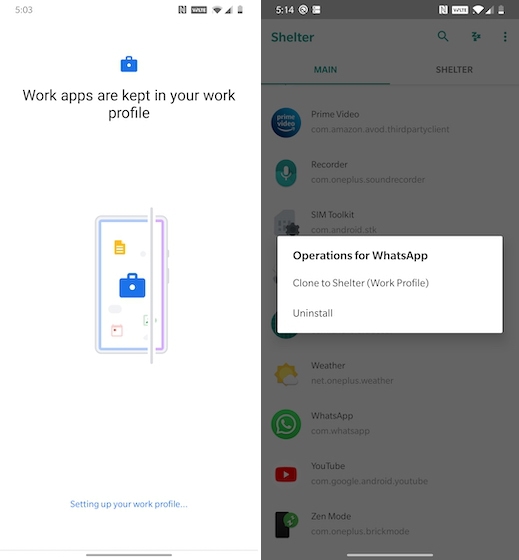 Of course, you can also use it to clone apps and manage multiple accounts. One of my favorite features of this app is that it allows you to freeze background-heavy or seldom-used apps when you don’t need them. Not only it’s good for privacy but it also means that the cloned apps won’t drain the battery too quickly. That being said, remember that like Island, you will not be able to hide cloned apps behind a password protected vault with Shelter. You will get all the other benefits of using a FOSS app. The app is free, there are no ads, and there is no tracking. If you want to ensure your data privacy, you should use this app.

Note: Since it works using the native work profile on Android, it might crash on those Android Custom ROMs that have broken implementation of the work profile feature.

Those are the five best Parallel Space alternatives apps that you can use to manage multiple accounts of the same on your Android smartphone. If you are privacy conscious, I suggest you try either Shelter or Island. Note that you will not be able to hide the cloned apps behind a vault if you use these apps. So, if you want more features, DO Multiple Accounts and others on this list are a good option for you. Check them out and let us know which one worked for you the best.