Let’s start the list with the most obvious language learning app on the market – Duolingo. Duolingo was one of the first apps to make learning languages cool and popular again. The app brings a fun curriculum with bite-sized lessons that are easy to digest. One of the best things about Duolingo is that it learns and adapt to users’ learning style and provides lessons and exercises that bring the best results. I also love Duolingo’s reward system which acts as an impetus to keep me engaged. The best part is that all the courses are free. There is, however, a paid subscription that gets rid of ads and lets you access the lectures offline. If you are looking for free language learning apps, this is the best one that you can get. 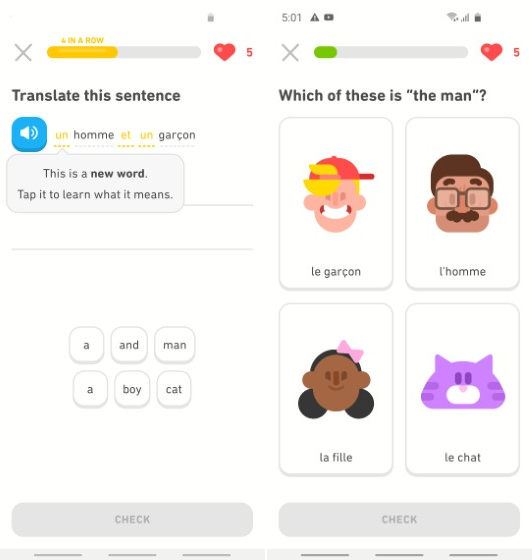 Drops is a really good language-learning app for users who are short on time. By spending just 5 minutes a day on this app, you will start to grasp the intricacies of a new language. It might sound unrealistic, but by giving your 5 minutes sprints, the app ensures that you don’t get bored and progress quickly. Of course, you can do multiple sprints in a day to advance your learning timeline. It’s up to you how much time you want to spend on this app every day. One of the biggest benefits using Drops is that it gives you a beautiful illustration of all the words that you are learning so you learn easily by context.Apart from giving you these illustration-based learning sprints, Drops also brings fun games and audio-based learning. 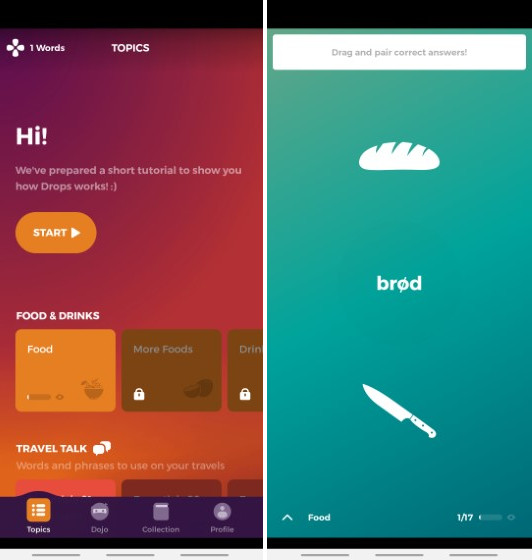 Drops is not an app that will help you master a language, instead, it brings an arsenal of around 2000 words that cover 90% of everyday word usage in a language. This ensures that you can quickly pick up a language and can converse in it. Drops also has character learning lessons that will help you learn the alphabet. Finally, there’s the advanced statistic that gives you access to your daily progress with a detailed report of all the words you studied. Like Duolingo, all the courses on Drops are free with in-app purchases to unlock extra features.

Memrise is one of the best language learning apps that you can install on your Android or iOS devices. The USP of this app is that it uses real native speakers to teach you their language. They create local video clips that you can watch on the app and learn from. This is useful as you not only get the context of the words but also hear the clear pronunciation. Memrise teaches you a new language by showing you fun video clips and playing fun quiz-type games. Most people don’t get anywhere with a new language because they are bored before they even start. Well, learning with Memrise is anything but boring. The app is free to use but you will need to pay the premium price if you want to take content offline or unlock extra features. 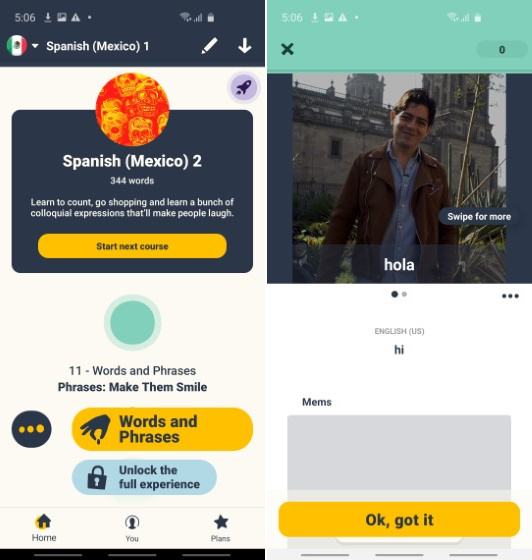 While apps like Duolingo and Drops make learning fun, they don’t give you a structured course. This can be a problem for users who are accustomed to learning by following a structured class. If that’s you then you should try Babbel. Babbel is an excellent language learning app that brings an interactive and structured course that is built by language experts. Babbel aims to not only teach you the normal workings of a language but to help you master it. I also love that while Babbel brings a structured course, it’s not a boring experience. The UI is very minimalist and the app never feels overwhelming. Lessons focus on words, translations, pictures, and pronunciation. 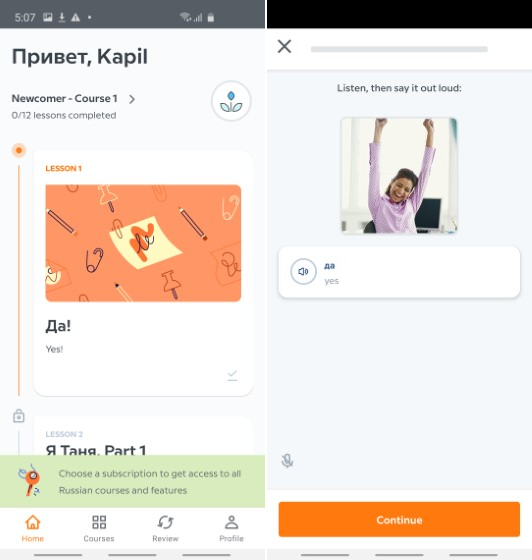 Babbel gives you an experience of attending an online college and in a good way. You get the fun of using a language learning app with the structure of a college class. Essentially you are getting the best of both worlds. Currently, Babbel is only offering courses in 14 languages so check below to see if your dream language is on the list or not. Also, unlike the apps above, courses on Babbel are paid. You only get one lesson for free to check out the app and then you have to buy a subscription to continue your learning.

If you prefer a scientific way of learning to get the best result with the least effort, you should try Lingvist. Lingvist uses artificial intelligence to test your knowledge and then tailors the course to your needs. The app focuses on teaching you the practical vocabulary which you can use to carry out a normal conversation with a native speaker. When it comes to the learning process, Lingvist uses spaced repetition, flashcards, native sounding virtual voice, and other techniques to teach you the most prominent words of a language. 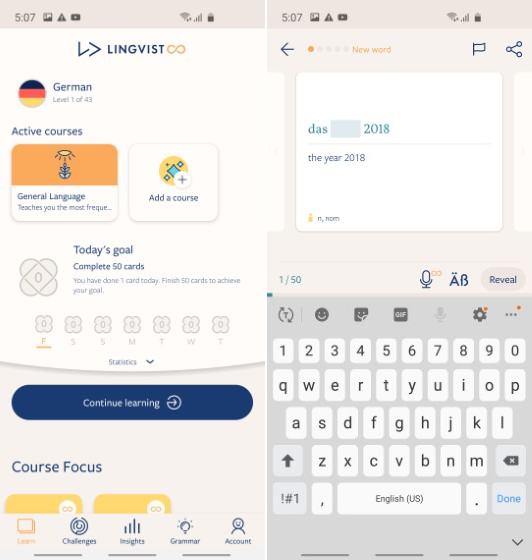 It also asks questions as you take lessons to measure your progress and fine-tunes the course according to your performance. Overall, I find Lingvist to be a competent app for teaching people who want to have a conversational proficiency in a new language. The only drawback of this app is that it only supports five languages.

Pimsleur may not be as popular as some of the other language learning apps on this list, but it is one of the best. The app focuses on teaching you conversational language so you don’t spend all your time just improving your vocab, not knowing how to use the words. The app promises to make you proficient in a new language and requires you to spend only 30 minutes a day on the app. Yes, that might seem a bit much compared to other apps, but keep in mind, after you take a course here, you will be able to converse with native speakers without any problem. The app mirrors how people learned their native language and uses the same principles to teach you by listening, repeating, and answering questions. 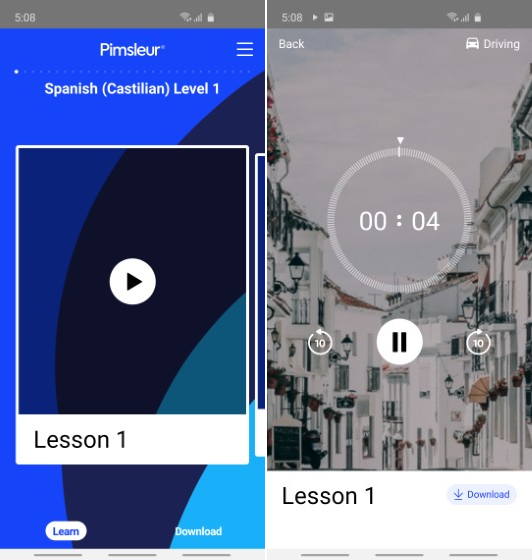 What I love about this app is that you get a hands-free learning experience. You are not wasting time tapping on buttons. The app has courses on 51 different languages so most of you will find your language of choice here. Note that the free version of the app is quite limited and you have to pay to get the full course.

Tandem is one of my favorite language learning apps on this list. The app teaches you to learn a new language by chatting with native speakers. Tandem is a language exchange community where people from different countries can interact and learn their language. I love the app as it lets me practice with native speakers which are bound to improve my pronunciation and usage of words in the right context. The app has a built-in translation feature which is meant to help you when conversing with a native speaker of another language. You aim to reach a point where you no longer require that feature. You can even hire professional tutors if you want to speed up your progress. If you love community-based learning, this is the best app for you. 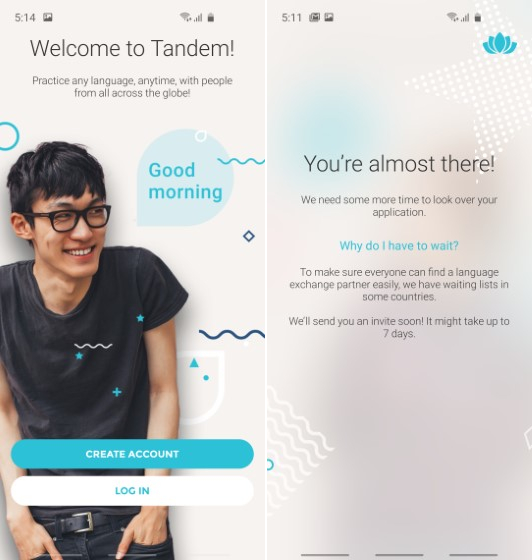 Note: You may have to wait for a few days before you are accepted in the program. That is why, make sure to fill the sign up form carefully.

Busuu is one of the most popular apps for learning new languages and for good reasons. The app is used by over 90 million people and together they create a community that has a healthy respect for new language learners. Busuu serves award-winning courses on 12 popular languages, and if you want to learn them, Busuu is a great place to start. The app starts with a test to determine your expertise in a new language and then recommends you courses-based on your proficiency. 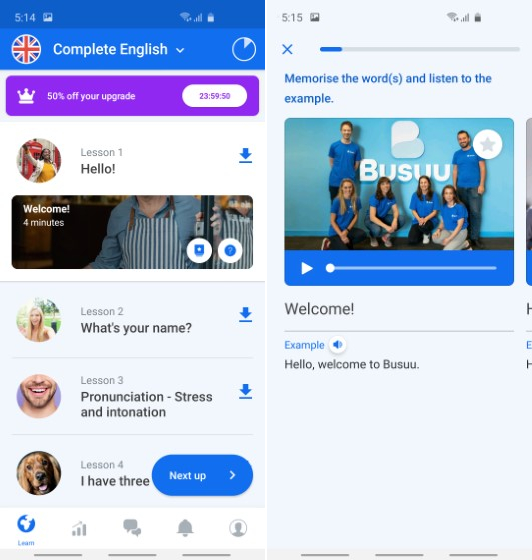 Each course comes with over 150 different lessons to help you master not only the vocab but also grammar. The content on the course is developed by experts & teachers, so you can be well assured of being in the right hands You can even take help from native speakers that are in the community. Once you master a language you can take an exam to become certified with McGraw-Hill Education.

Rosetta Stone is probably the oldest computer-assisted language learning service and now it’s also available for Android and iOS smartphones. The app teaches you a new language by connecting what you are seeing on the screen to what you are saying. It offers courses in 24 different languages so most of us can find a language that we are interested in learning here. You will get a personalized learning plan that will keep your current skills in mind. You will learn exhaustive vocab and get instant feedback on your pronunciation. All the lessons are available offline and your progress is synced across devices. Note that while the app is free to download, you will need to buy a subscription if you want to take a full course on any language.

Asian languages are probably the hardest languages to master. So, if you want to master such a language you should use a service that focuses on these languages. LingoDeer is probably the best app to learn Asian languages. The app brings courses on Japanese, Chinese, Vietnamese, and Korean languages along with courses on some other non-Asian languages. It starts with the basics by teaching you the alphabet systems that build a solid foundation. Then it moves onto grammar that is necessary to understand how a language works. The app also features recordings from native speakers so you can master pronunciation. There’s also a built-in flashcard review system that helps in memorizing words and improving your vocab. If you want to learn Asian languages, you should try this app. 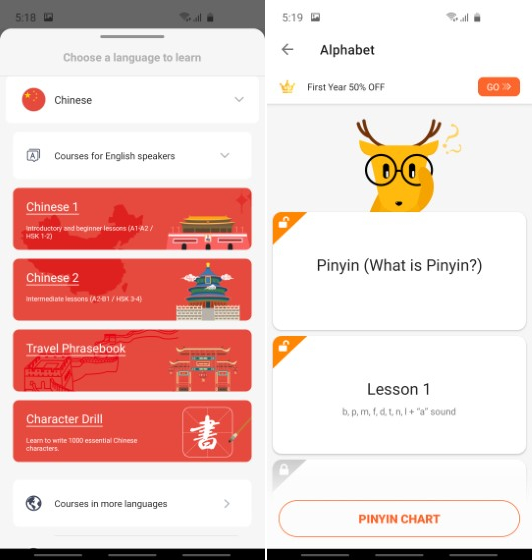 Learn a New Language in 2020 with These Apps

That was our list of the best language learning apps you can use to learn a new language in 2020. We have included both free and paid options. So, you can start your learning journey irrespective of your budget. Some of the apps aim to teach you conversational language while others let you master the language. Choose the apps that meet your requirements and budget. And let us know how it goes. Also, share with us your language-learning experience by writing in the comments below.