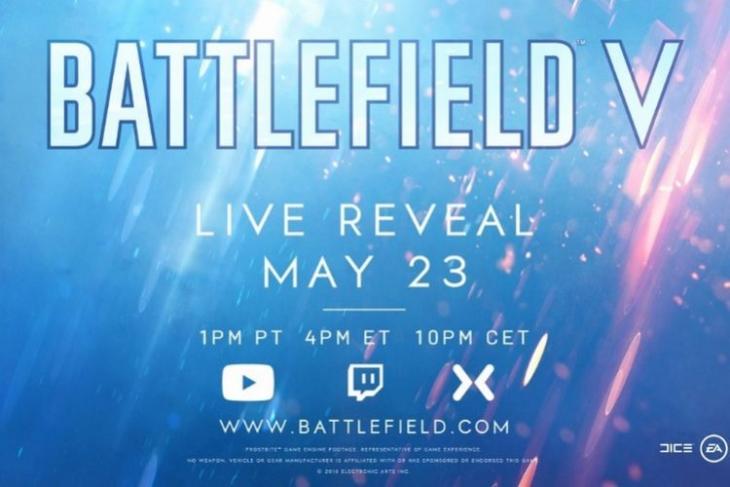 Back in January this year, EA’s CFO Blake Jorgensen confirmed that a new Battlefield game is in development and that it will be released soon. Following the announcement, reports started pouring in that the next Battlefield game will explore the World War II era and might be released later this year.

EA has now put an end to all speculations and rumors by officially announcing a new game in the Battlefield franchise titled ‘Battlefield V’. Teaser for the next game in the popular franchise has already gone live on the official Battlefield website, which confirms that the studio will host an official reveal event on May 23.

#ad The rumors are true (rumors that I started, but still…) I will be hosting the @Battlefield Live Reveal on Wed, May 23rd. Catch it streaming live on the #Battlefield YouTube. V EXCITING! pic.twitter.com/7B3fpTpQ6x

The next chapter of EA DICE’s groundbreaking all-out war saga is Battlefield V.

The Battlefield V reveal event will be hosted by comedian and The Daily Show host, Trevor Noah, who confirmed the same via a tweet. EA has already started the hype campaign for the next Battlefield game, publishing a ten-point teaser post about the upcoming game on the official Battlefield website.

EA claims that Battlefield will introduce exciting gameplay changes and will also bring back the fan-favorite War Stories that will add a compelling narrative and engaging storyline elements to the game. The studio is also teasing new modes and experiences which surely has something to do with the in-game Operations, alongside the promise of an even more immersive gameplay with unmatched sights and sounds.

In case you want to watch the livestream of the official Battlefield V reveal event, you can do so on the Battlefield YouTube channel and the Battlefield website. The event will also be streamed on Twitch and Mixer on May 23 at 1 PM PT / 4 PM ET / 10 PM CEST.