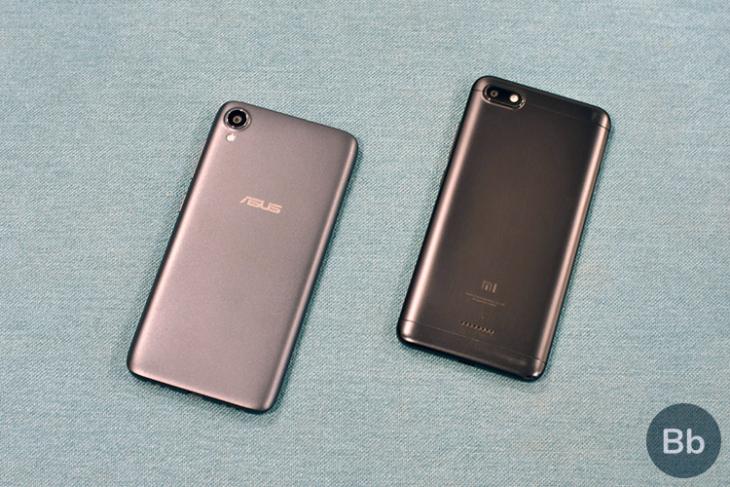 Xiaomi’s entry-level Redmi smartphones are surrounded by rivals which offer similar hardware at competitive price points, yet, they all have fallen short of dethroning the budget king. Asus is the latest one to challenge Xiaomi’s dominance in the entry-level segment with the Zenfone Lite (L1), which is poised to take on the Redmi 6A.

Launched at an introductory price of Rs 5,999 (retail price: Rs 6,999), the ZenFone Lite (L1) seems capable enough to take on the Redmi 6A (starts at Rs. 5,999), at least on paper. Asus may have perfected the recipe for its comeback, but can its latest budget offering take on Xiaomi’s best-seller?

After spending a few days with the Zenfone Lite L1, here are my first impressions of Asus’ latest phone, and how it stacks up against the Redmi 6A:

Before talking about my personal experience with the devices, here’s a quick look at the specs comparison of the two:

Both these budget phones feature a polycarbonate build with a metallic finish. While the Redmi 6A looks like any other Xiaomi phone out there, ZenFone Lite (L1) has its own identity among the lot – well, on the rear at least. 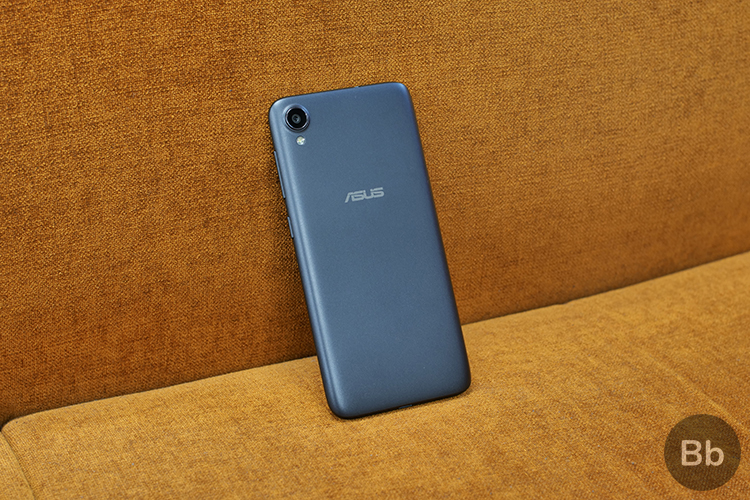 Both of these phones are quite light but the metallic finish of the rear panel, which wraps around the edges, makes it easier to grip and comfortable to hold. Their build still does feel plastic and cheap but it isn’t much different from the Redmi 6 in this department. There’s also a single camera sensor on the back and front, coupled with an LED flash.

Turn both of the phones around and you’ll find a similar-looking design, a 5.45-inch HD+ IPS LCD display (with an 18:9 aspect ratio and 1440×720 pixels display resolution) and black bezels on the top and bottom, which I prefer over the white bezels. The display on ZenFone Lite L1 looks decent in the brief time I’ve spent with it. It gets decently bright and colors look good enough for a device in its price range. 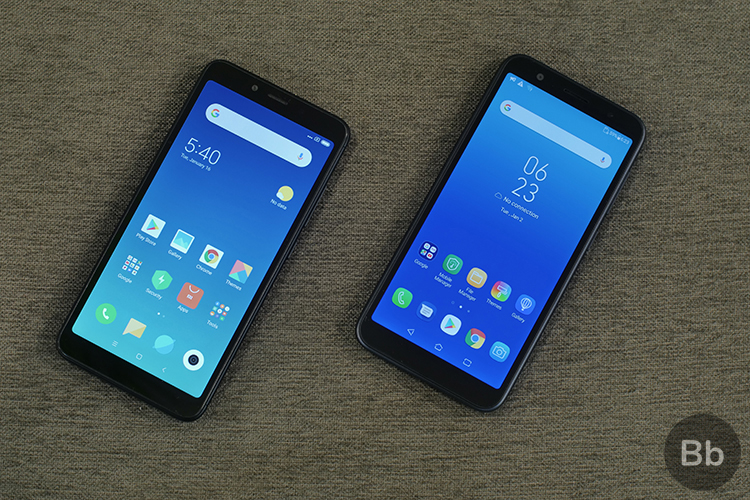 Both the ZenFone Lite and Redmi 6A also include a micro-USB port (wasn’t even expecting USB Type-C at this price point either), along with a 3.5mm headphone jack at the top. We also get rear and bottom-firing speakers on the Redmi 6A and ZenFone Lite respectively.

MIUI is fluid and optimized on Xiaomi’s phones, but ZenUI on the Asus ZenFone Lite is pretty good too, and holds a close resemblance to Samsung’s new Experience UI – especially the icons. Both custom skins are pretty feature-packed, with ZenUI 5.0 including Audio Wizard, Face Unlock, Memory Cleaner, and more.

The Redmi 6A can now be upgraded to MIUI 10 (still based on Android Oreo) and which feels a lot closer to Android 9 Pie in terms of fluidity and aesthetics, which is preferable to ZenUI for the time being. There’s also a myriad of India-specific features baked into MIUI that tip the scale in Xiaomi’s favor.

While both of these devices may just be affordable mid-rangers, but cameras have now become important aspects of a smartphone – be it in any price range. The ZenFone Lite and Redmi 6 both include a 13MP rear sensor and a 5MP selfie camera, so they’re stacking up quite well against each other. 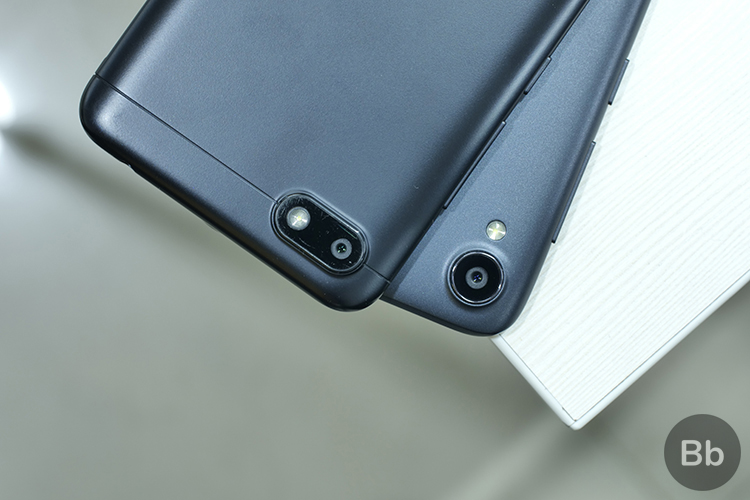 As you can see in the camera samples attached below, the shots captured using the Redmi 6A produce better colors, have more depth, and are definitely good enough to be posted on social media. The ZenFone Lite L1 was a hit and miss for me. While some daylight photos turned out great, the others lacked detail or were oversaturated. It also produces images with cooler tones as compared to the warmer Redmi 6A.

In low-light conditions too, the Redmi 6A appears to capture better photos which also have more detail than the Asus ZenFone Lite pictures. And ultimately, the ZenFone Lite L1 looks to be lacking even on the selfie, as well as portrait front but we’ll reserve our final verdict for our in-depth review that’s coming very soon.

In my opinion, performance is the most crucial aspect of an affordable smartphone as the users are looking to get the bang for their buck. And while the Redmi 6A failed to impress me while I was reviewing it, thanks to the unoptimized MIUI experience on the MediaTek chipsets. The 2GB variant at the Beebom office failed to handle heavy workloads and I noticed a lot of jitters and frame drops during my daily use, but the experience has improved quite a bit with MIUI 10. 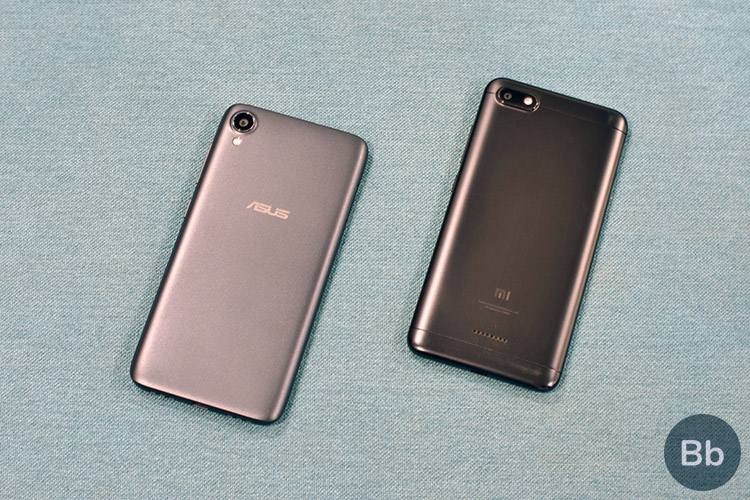 Though I haven’t spent a lot of time with the ZenFone Lite L1, the overall performance of this device is looking better than the Redmi 6A. The 2GB RAM is on the short side, and there were occasional frame drops and lag.

I also tried playing games such as NFS: No Limits, Shadowgun Legends, and of course, PUBG. The latter two games did show some signs of lag from the get-go, however, I’ll have to spend a bit more time with the device to know better.

ZenFone Lite L1 vs Redmi 6A: The Best Now Has A Rival

Redmi 5A came to be known as one of the best-selling smartphones in Xiaomi’s portfolio over the last year. The Redmi 6A, its successor, would have also headed down the same path, and still may be capable of doing that, but Asus is not willing to stop until it targets and gives some of the best-selling phones in India a tough competition.

Though the ZenFone Lite L1 and Redmi 6A stack up quite well against each other, I’d suggest you get the former not just for its superior looks and in-hand feel but also for an equally-good user experience. You would, however, have to compromise on the optics front, which is where the Redmi 6A shines above Asus’ ZenFone Lite L1. That being said, if you’re eager to learn more about the ZenFone Lite L1 then stay tuned for our full review.