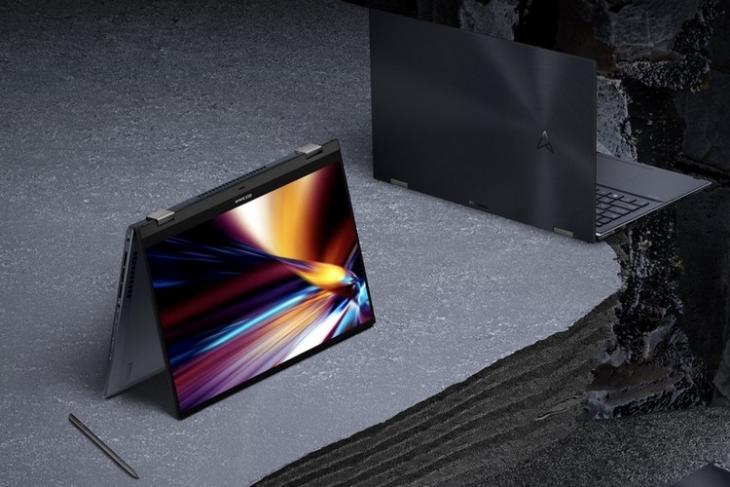 Starting with the Asus Zenbook series, the Taiwanese company has announced the new Zenbook Pro 16X OLED that comes with a 16-inch touch-supported 4K OLED display with a 60Hz refresh rate, a 16:10 aspect ratio, Dolby Vision, and Pantone validation. It is an Nvidia Studio-rated device and packs up to Intel’s 12th-Gen Core i9-12900H CPU along with an Nvidia GeForce RTX 3060 GPU.

Asus also says that the new Zenbook Pro 16X comes with the new IceCool Pro cooling system that can enable the laptop to operate at 140W TDP without any CPU throttling. The fan noise, as per the company, remains as low as 40dB.

Next up is the dual-screen Zenbook Pro 14 Duo OLED, which has gotten a refresh. The laptop already comes with a primary 14.5-inch 2.8K OLED display with a 120Hz refresh rate along with a secondary 12.7-inch ScreenPad Plus display. On the new model, Asus says that the secondary 12.7-inch display is brighter than its predecessor with improved tilt functionality to offer better cooling.

Other than these, Asus will be adding OLED displays to more of its Zenbook models, including the Zenbook Pro 15 Flip OLED, which comes with the world’s first 15.6-inch 2.8K 120Hz OLED display. Under the hood, the device can pack up to Intel’s 12th-Gen Core i7 CPU and Intel’s brand new ARC A370M GPU. Other than these, the Zenbook Pro 15 Flip OLED features the IceCool Plus Thermal technology, a 360-degree ergo lift hinge, Harman Kardon-certified Dolby-Atmos speakers, and more.

The Zenbook Pro 17 is the company’s first 17.3-inch Zenbook model, sporting a 2.5K IPS LCD panel. It is a Pantone-validated panel, supporting Dolby Vision and a 165Hz refresh rate to deliver an ultra-smooth viewing and UI experience. The Zenbook Pro 17 can pack up to an AMD Ryzen 9 6900HX CPU and an Nvidia GeForce RTX 3050 GPU. Additionally, it has the Dolby Atmos-backed Harman Kardon speakers and comes in a sleek design.

As for the Zenbook S Series 2022, Asus has announced a new Zenbook S13 Flip OLED and a Zenbook S13 OLED with advanced features and high-end specs. While the Zenbook S13 Flip OLED comes with a 2-in-1 design and a 360-degree ErgoLift hinge, the standard S13 OLED model comes in a traditional design. Both the models come in a magnesium-aluminum alloy chassis and a 2.8K 16:10 OLED display with Dolby Vision, thin bezels, Pantone validation, Vesa DisplayHDR True Black 500 certification, and 100% DCI-P3 color gamut.

Under the hood, the Zenbook S13 Flip OLED can pack up to 12th-Gen Intel Core i7 CPUs, while the standard S13 OLED model comes with up to AMD Ryzen 7 6800U CPU with Radeon 680M GPU. The S13 Flip OLED is backed by a 67Whr battery, three Thunderbolt 4 ports, and a microSD reader.

Apart from updating its Zenbook line of laptops, Asus has also refreshed many of the models under its Vivobook series. The company has added OLED displays to the Vivobook Pro models ranging from the Vivobook Pro 16X model to the standard Vivobook Pro 15. Each of these laptops now comes with an OLED display and can pack up to an Intel Core i9-12900H or an AMD Ryzen 8 6900HX CPU along with an RTX 3070 Ti GPU. They can be configured with up to 32GB of DDR5 RAM and up to 2TB of SSD. They also come with the same IceCool Plus thermal technology as the Zenbook models to provide optimal CPU and GPU performance.

There is also the new Vivobook 13 Slate OLED Artist Edition, which is the company’s existing 2-in-1 hybrid device, that now comes with various themed accessories and kickstand covers. These themed accessories are designed by two renowned artists — Philip Colbert and Steven Harrington.

Now, coming to the prices of the new Asus laptops, most of them are currently under wraps. However, it is safe to say that they will heavily depend on the configurations and components of the laptops. However, Asus has announced the price of the refreshed Zenbook Pro 16X OLED, which will start from $2,600 (~Rs 2,00,779), and the new Zenbook 14 Pro Duo OLED will start from $2,000 (~Rs 1,54,419).

As for the availability, Asus is yet to announce the launch dates of its upgraded OLED laptops. While they are slated to release sometime in the coming days or weeks, we’d suggest you stay tuned for further updates. Also, let us know your thoughts about the new Asus laptops in the comments below.