When Android 6.0 Marshmallow arrived last year, we were a bit disappointed because it was more of an under the hood update but that’s certainly not the case with Android N. The Android N is in Developer Preview right now but it already seems like a a major update. So, you must be wondering about all the changes that Google has made from Android 6.0 Marshmallow to Android N, right? Well, stop wondering, as we pit Android N against Android Marshmallow in a detailed comparison and find out all the changes:

The multitasking on Android has gone through a major overhaul with Android N. The new version of Android finally brings support for split-screen multitasking. The new multi window feature lets you run two apps side-by-side and you can easily resize the windows according to your need. Also, the recents or the multitasking button does a lot more, unlike Android 6.0 and Android versions previous to it. The recent button now lets you jump quickly to the last app you were using through a double tap. 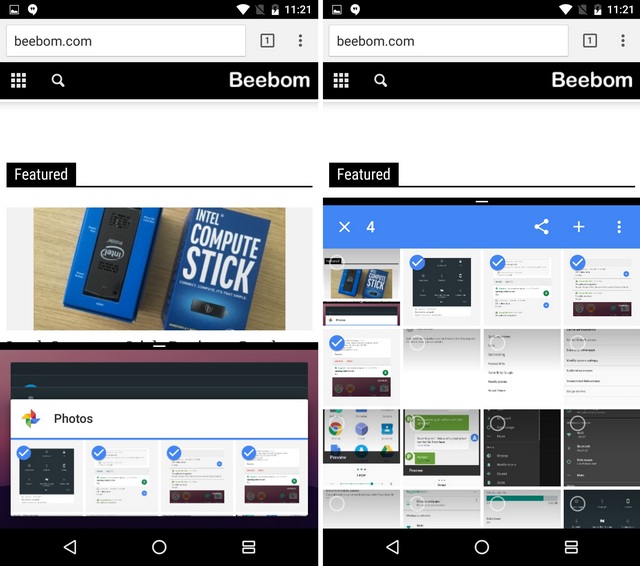 Moreover, the multitasking interface too has been tweaked from Marshmallow and it now shows larger app cards. While Android devices from the likes of Samsung or LG have had this feature for quite some time now, it’s great that stock Android has natively implemented it. With Android N, the feature will reach the masses and more app developers will bring apps that support the multi window feature. 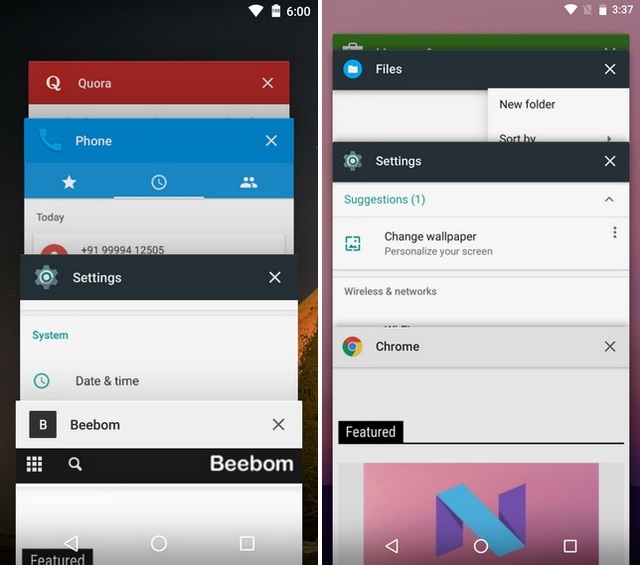 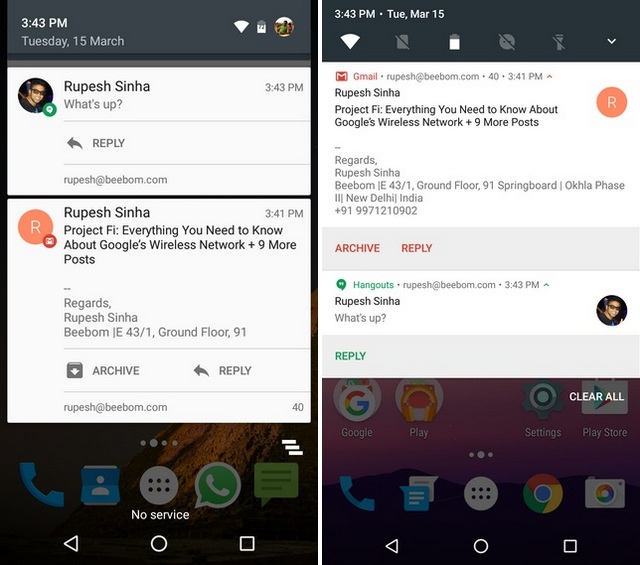 The point is, once you use Android N’s notification center, the Android 6.0’s implementation will feel outdated and you can make that out even with the screenshots above.

The Quick Settings on Android 6.0 Marshmallow is pretty rigid to say the least. Yes, you can go ahead and make changes to it in the System Tuner UI settings but even then, there are not a lot of options to play with. Well, that changes with Android N, as it brings the ability to have more than one pane of Quick Settings, plus there’s an edit button upfront to add, move and remove toggles. Also, you won’t need to swipe down to access the most used toggles, as they are available at the top of the notification shade itself. Other than that, there are some other minor UI changes that make sure to use the space as efficiently as possible. 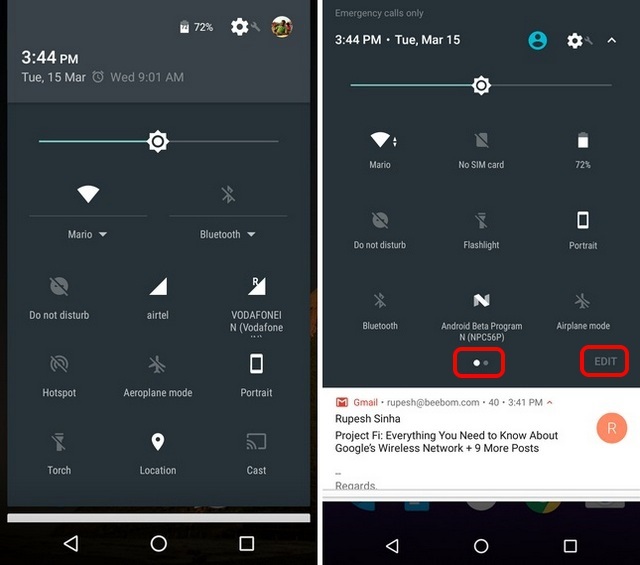 Android N brings some cool changes to the Settings app, which make it more streamlined from Android Marshmallow. The Android N Settings app includes suggestions of settings at the top, that you might have missed out on. All the sections in the Settings page now show more info, for instance, the Data Usage option shows the amount of data you have used. It also incorporates a new hamburger menu inside the sub-menus to let you easily jump to other settings, without having to press the back button repeatedly. Moreover, it also notifies you at the top of the page, when a mode like Data Saver, Do not disturb etc. is turned on. Overall, the new Settings page is a welcome change, especially the ability to see info right on the main page. 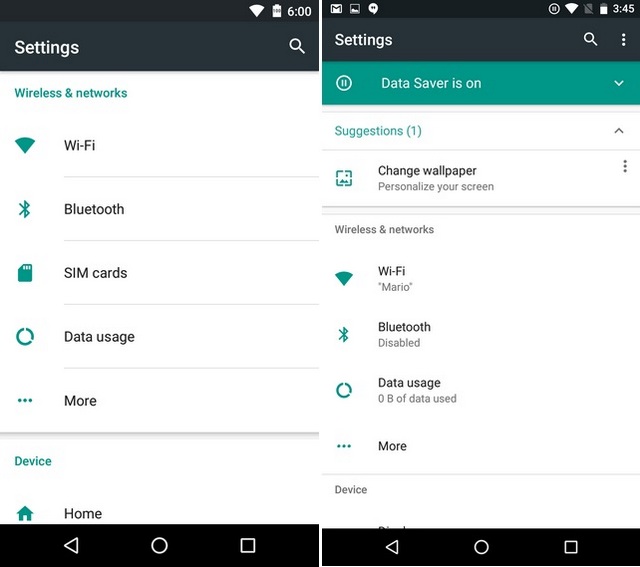 Google introduced the cool Doze mode in Android Marshmallow, which works in the background to minimize CPU & network usage to save battery, when the device is idle for a long time. With Android N, Doze Mode gets more advanced with the ability to minimize operations when the screen has been off for a long time. Also, when the device is idle, Doze mode will now make sure that there are no wakelocks, network access, GPS or WiFi scans and alarm activities will be deferred. The Doze Mode already comes in quite handy in Android 6.0 and with Android N’s Doze, the battery woes should lessen a lot more.

While Android has had the ability to set limits and restrict background data since a long time, Android N has introduced a new Data Saver mode, which is a much better implementation. The Data Saver mode not only restricts background data access, it also signals apps to limit data usage in the foreground. Unlike previous Android versions, you can add apps to a whitelist in Data Saver mode and those apps will be able to access data in the background even when Data Saver is turned on. 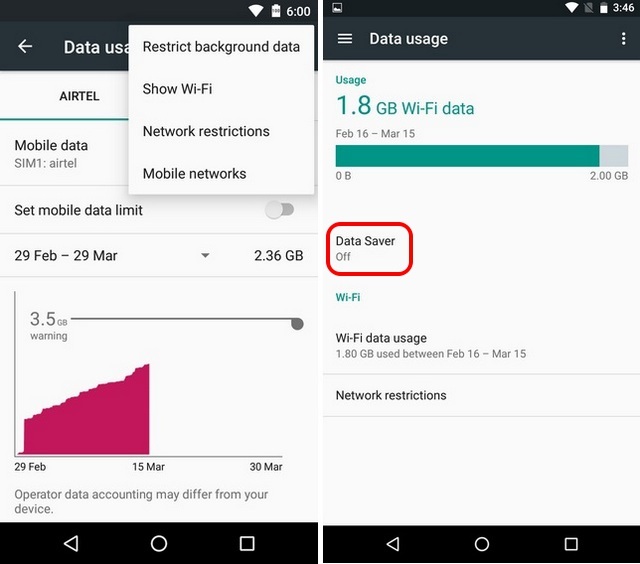 Not many people know that Android 6.0 Marshmallow natively includes a file manager buried in Settings->Storage->Explore. It’s pretty basic though and Android N brings some much needed improvements on that front. The file manager in Android N includes a hamburger menu, which lists the various categories like Images, Videos, Audio, Recent, Documents etc. It also lets you view files saved in Google Drive. It also includes the ability to search, move and share files along with the ability to open multiple windows. While there are a few features like compressed files support still lacking, it’s still a pretty capable file manager. 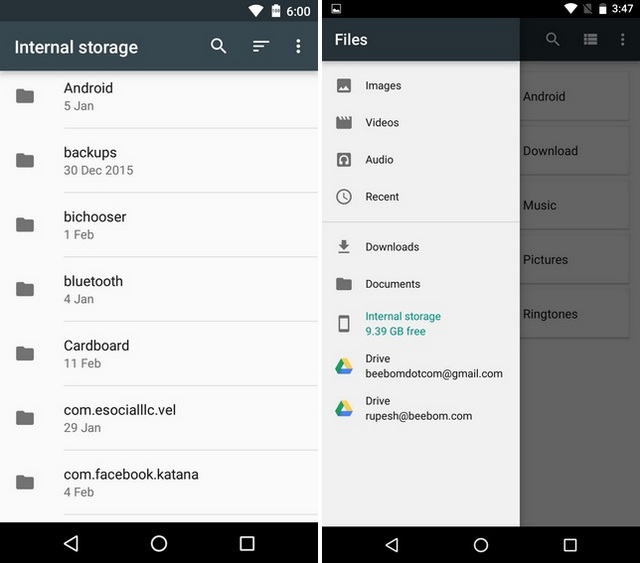 Android has lacked the ability to block calls natively but Android N changes that. While Google has taken a long time to bring the feature, it has made sure to implement the feature perfectly. The blocked numbers list on Android N can even be accessed by multiple apps and the service providers, so there would be no way the number can contact you, which is pretty impressive. Android N also brings call screening, so you can easily fend off telemarketers and spam calls. The new dialer app will even let you make sure that you don’t see these numbers in the call log.

Along with the major differences between Android N and Android 6.0 Marshmallow we mentioned above, there are a few other changes Android N brings. Android N includes the ability to change the DPI of your device’s display, which works system wide and not only on text size. Previously, the ability to change DPI was only available in rooted devices running a custom ROM, so geeks are going to love this. 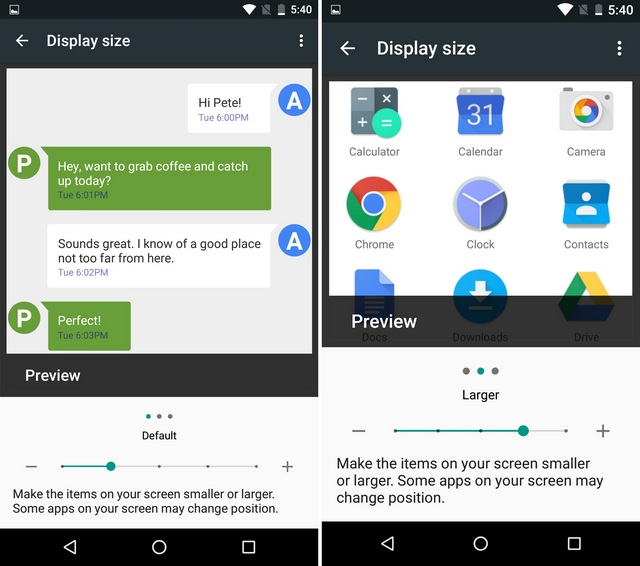 Another great feature is the ability to enter your emergency info like address, blood group, emergency contact, medications etc., which will be available through the lockscreen with the emergency dialer. So, if there’s an emergency, anyone will be able to access this info without having to unlock the screen. 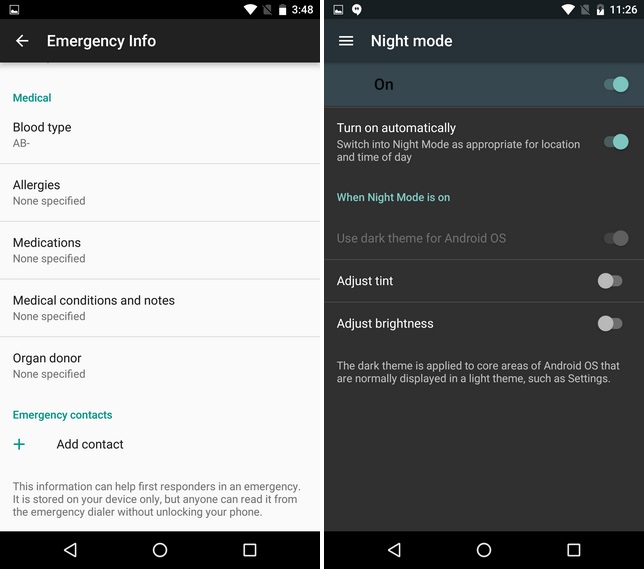 Android N also includes a cool new Night Mode aka dark theme, which debuted last year with Android M Preview but did not make it to the final build of Marshmallow. Well, it’s here again and it has been refined with options like the ability to set it automatically depending on location and time of day. Also, you can adjust the tint and brightness in the Night Mode. There are many users who have been waiting for a dark mode on Android and Android N finally brings it. Another minor addition with Android N is the ability to calibrate display in the System Tuner UI settings.

It’s usual for Android updates to bring performance improvements & bug fixes and Android N is no different. Firstly, Android N gets rid of the annoying optimizing apps screen, which welcomed us every time the device was updated. This not only makes sure your device boots up faster but it also results in apps installing quicker in general. Android N also brings performance upgrades with better background optimizations for efficient power consumption and memory usage. The Project Svelte, which debuted with KitKat too has been improved, so that Android N runs efficiently on lower-end devices.

SEE ALSO: How to Install Android N Preview on Your Nexus Device

Android N is a major update and it’s only the first Developer Preview release, so we can expect way more changes in the future. In fact, there are various other cool changes that Android N brings and after you use it, you will certainly find it tough to move back to Android 6.0. We are certainly very impressed with Android N, how about you? Tell us about it in the comments section below.

Android N Developer Preview 2 brings a few changes to the Android homescreen as well. There are new circular folders, which isn’t really a radical change but looks good nonetheless. The homescreen now also supports the pinch-to-zoom gesture we’re used to from the other launchers. When you pinch on the homescreen, you get the homescreen options like wallpapers, widgets and settings. 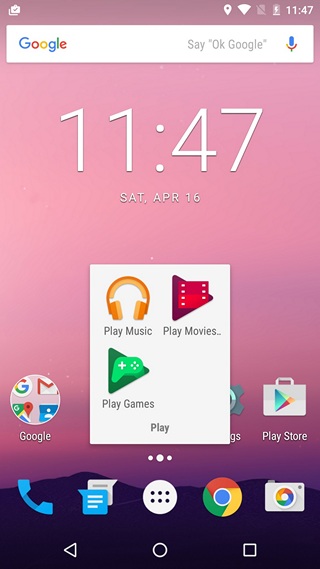 Android N Preview 2 also brings support for new Unicode 9.0 emojis, which means more human-like emojis along with support for different skin types. The new emojis are similar to what we are used to from iOS and WhatsApp and while some emojis remain unchanged, we can expect them to be updated in the next previews of Android N. Overall, this is certainly good news, as emojis in the current Android version look a lot bulbous. 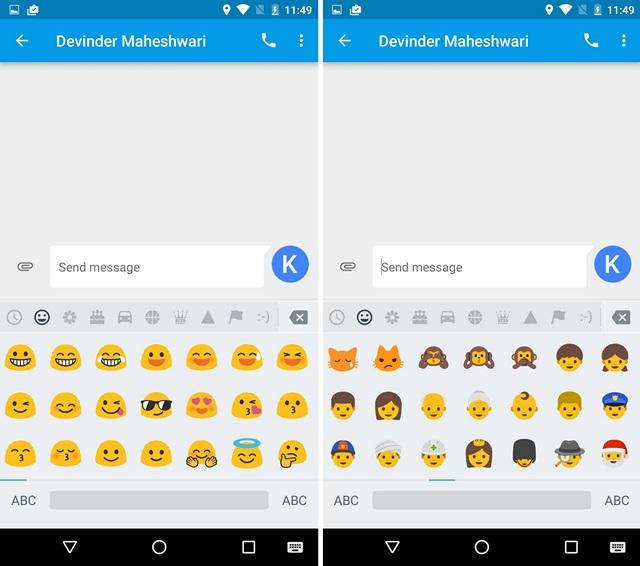 How To Run Android M on Windows?

RAW vs JPEG: What Image Format You Should Use

Intel Kaby Lake vs Skylake: What Does the 7th Gen Processor Offer?