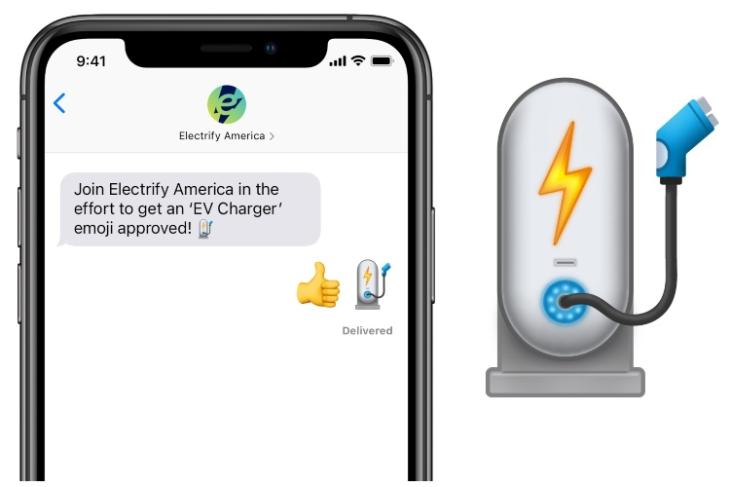 With the evolution of chatting over mobile devices, the emojis have become a core element of our conversations. We use the animated pictographs to convey various feelings, represent objects, or simply have fun in chats. Now, we already have hundreds of emojis available for our conversations, with companies adding support for more frequently. However, we might see some new ones (probably next year) exclusively focused on electric vehicles as an American charging company has proposed a new emoji to showcase an EV charging station.

Electrify America is an American electric vehicle charging provider that is trying to push the Unicode Consortium, the official regulators of emojis, to introduce some new emojis focusing on electric vehicles. The company, right before the World Emoji Day, proposed a new charging station emoji. It hopes that the Unicode Consortium will accept the proposition and add the emoji with its future updates.

Now, the proposition comes with an official post on the company’s newsroom. In this proposition, Electrify America explains why we need an “EV charger” emoji now, more than ever. It even has a petition running on Change.org which you can sign from here.

The company, in the post, states that currently, the only emoji to depict vehicle re-fuelling is the gas pump emoji. However, as the electric vehicles (EV) are getting more and more popular in global markets, there should be emojis to represent the re-charging of these vehicles. So, they designed a new “EV charger” emoji (below) themselves for the proposition.

Apart from this new proposition, the company also proposed a similar idea last year. In that proposition, there was another EV focused emoji (below) that depicted an electric car getting charged beside an EV charging station.

However, this emoji was rejected by the Unicode Consortium.

So, this time, the company hopes that the emoji organization would accept its proposition and add at least one emoji focused on electric vehicles in its future list of emojis.

10 Years of Emojis on iPhone: A Brief Timeline