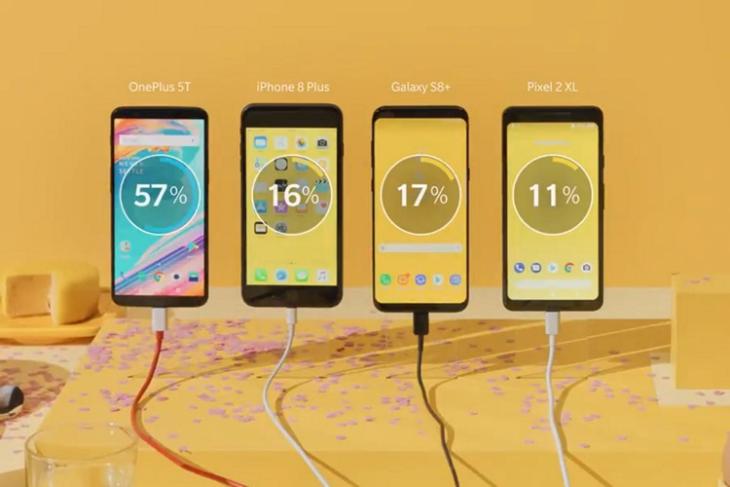 It has been just over a week since the new OnePlus 5T was unveiled to the whole world, and although the initial response has been quite positive, the company intends to promote their new flagship in the best way possible. What could a better way to promote a OnePlus smartphone than comparing its Dash Charge technology that literally outshines every other flagship on the market? That’s exactly what OnePlus has done here.

The company’s official Twitter handle uploaded a new video that shows a screen-on charging test where they pit the new OnePlus 5T against this year’s biggest flagships like the iPhone 8 Plus, Galaxy S8+ and Pixel 2 XL.

Spoiler alert, the OnePlus 5T was miles ahead of the competition. That’s right, the new OnePlus 5T was charged to 57% in just 30 minutes, whereas the iPhone 8 Plus, Galaxy S8+ and Pixel 2 Xl fell way short at 15%, 17%, and 11% respectively. Well, I’m pretty sure OnePlus used the iPhone’s in-box charger for the 8 Plus, so no surprises here.

However, you might be thinking why the numbers are so low on the Galaxy S8+ and Pixel 2 XL that come with fast chargers out of the box. If you haven’t noticed properly, this is a screen-on charging test and Dash Charging has a clear advantage in this department. 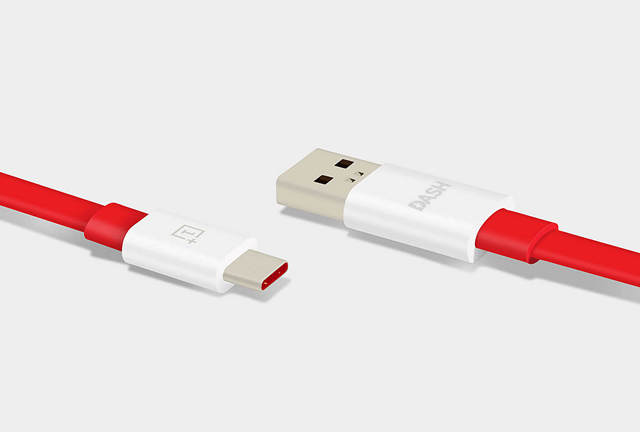 If you haven’t noticed properly, this is a screen-on charging test and Dash Charging has a clear advantage in this department.

Well, let me explain the reason for this result. For starters, the OnePlus 5T uses a 20W charger whereas the Galaxy S8+ and Pixel 2 XL uses a 15W and 10.5W power adapter respectively. Additionally, OnePlus’ Dash Charging technology is designed to charge faster consistently even while you’re using the phone. This is because, unlike Quick Charge 3.0 or Samsung’s Adaptive fast charging, the dash charger produces a larger electrical current rather than just increasing the pressure. As a result, the Galaxy S8+ and Pixel 2 XL simply cannot keep up with the OnePlus 5T as long as the screen is on. 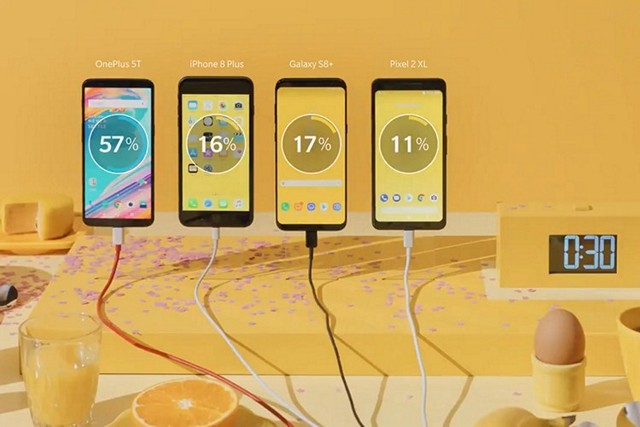 So, it’s true we loved seeing the affordable OnePlus 5T come out on top with flying colors in the company’s new ad, but this might confuse a lot of consumers, and that’s exactly why we at Beebom, wanted to make things clear.