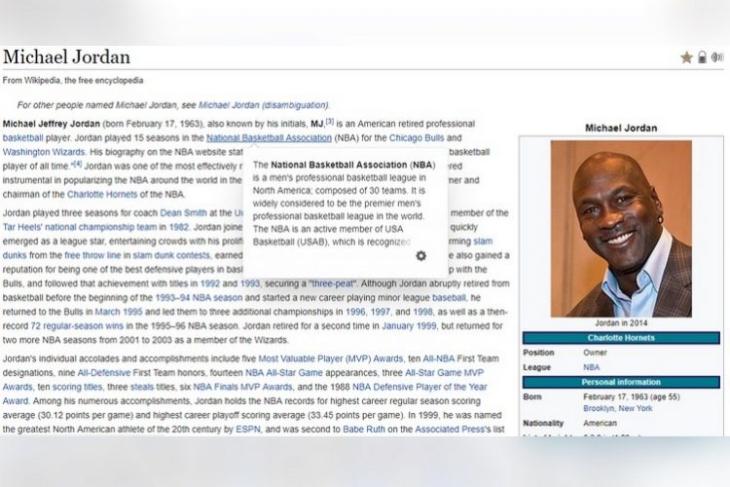 Wikipedia is one of the web’s five most-visited websites, and is the go-to resource for finding whatever information one needs. Be it academic or professional, Wikipedia simply has it all, but there’s just one slight problem i.e. the interlinked articles, which need to be opened on a separate page/different tab, and even after that, one has to sift through them and find the relevant information before returning back to the original one, and often you end up on a totally different article than the one you were on before. It can be a hassle at times, which ends now.

Wikipedia has released a new ‘Page Previews’ feature that will let users preview the hyperlink embedded in a word/phrase and read a short introductory blurb about it, before deciding whether it is worth clicking on and reading about it in detail.

That’s the newly deployed page previews feature available today on the English Wikipedia. The feature allows you to get a quick grasp of what’s behind a link without committing to a click-through.

Thanks to the new feature on Wikipedia’s desktop client, users will no longer have to switch back and forth between articles, or juggle tabs. They can simply hover over a link to see a synopsis of the article.

Personally, I find this feature quite helpful as I often open tons of different tabs with interlinked Wikipedia articles, and then end up getting confused and mistakenly closing the original article. However, Page Previews is not the only major change Wikipedia has introduced lately. Just a few days ago, the Wikimedia Foundation also launched a new initiative that would reward users for translating Wikipedia articles into local languages, making them accessible to a wider base of knowledge-seekers.