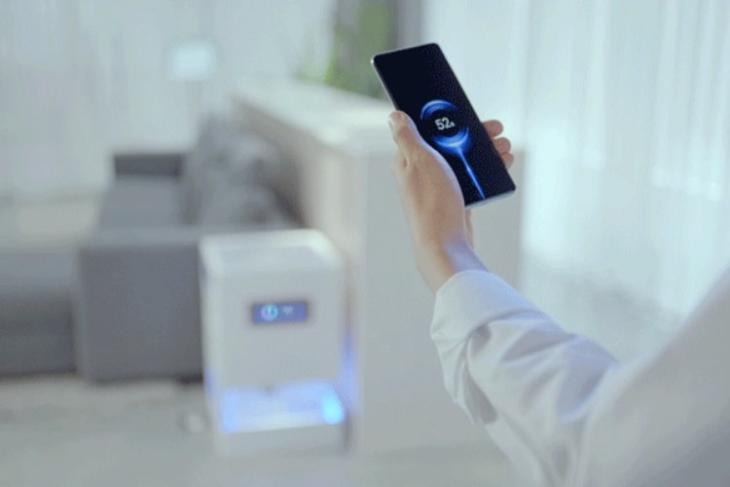 Oppo kicked off the trend of improved charging experience on our smartphones with its VOOC innovations a couple of years ago. Other phone makers have since followed suit, with Xiaomi leading the crowd with its 120W wired and 80W wireless charging technology. The company has made a leap today and shown off a new ‘Mi Air Charge’ technology. It allows users to remotely charge their devices over-the-air, without any wires or even a wireless charging stand.

The company announced this new technology via an official tweet and explained some of the nitty-gritties in a blog post. Xiaomi says that you can charge multiple devices at once and all of them will charge at 5W even when you’re walking around or sitting in the corner of the room.

The Mi Air Charge technology can easily juice up smartphones “within a radius of several meters.” Plus, the charging speeds are not affected by obstacles like other humans or furniture in the room. This self-developed technology, Xiaomi says, is not science-fiction anymore. It is a “bold attempt to turn the whole house wireless,” as per the blog post.

We're excited to bring you the remote charging technology – Mi Air Charge Technology! Charge multiple devices simultaneously while you're gaming, walking around or even when something's in the way, no strings attached. Another giant leap forward in wireless charging technology! pic.twitter.com/wEoB10wOQ2

Now, how exactly does the Mi Air Charge technology work? Well, Xiaomi explains that a self-developed isolated charging pile (or charging tower, as seen below) is at the core of this technology. It has five-phase interference antennas built in to accurately detect the location of the smartphone. It then transmits millimeter-wide waves through beamforming to charge the device.

This technology doesn’t just work with every smartphone. It needs to be equipped with “a miniaturized antenna array with a built-in beacon antenna and receiving antenna array,” as per the blog post. The beacon antenna broadcasts your location in the room while the receiving antenna (comprises of 14 antennas) is hard at work converting the millimeter-wave into electric energy through the rectifier circuit. And, this is how this tech works in real life.

You can see the over-the-air wireless charging feature in action in the GIF above. And no, you won’t see a blue light like while charging. It’s merely an effect to showcase the feature. Apart from smartphones, Xiaomi further says the Mi Air Charge tech will also work with fitness bands, smart speakers, and other smart home devices.

Now, you must be wondering – when will you be able to use this over-the-air charging technology in your own homes? Sadly, Xiaomi has offered no release date for the Mi Air Charge technology. It is merely a futuristic concept at the moment. We can expect it to become a reality, say like four to five years, down the road.