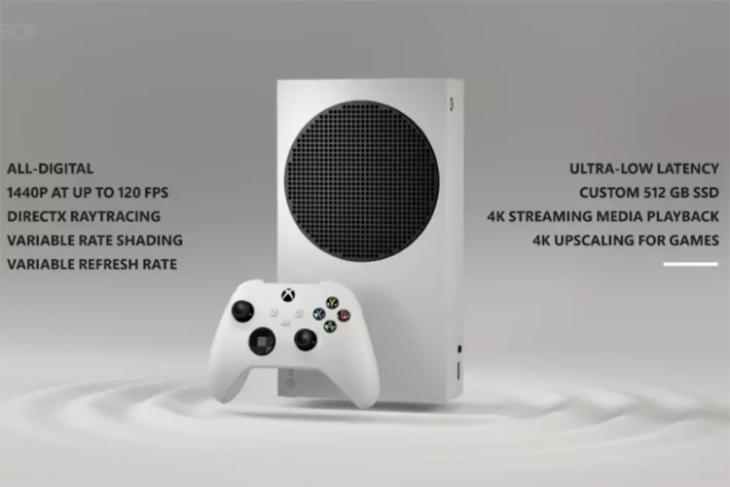 After the Xbox Series S was spotted on a leaked controller packaging, game pass vouchers, and a full blown image leak, Microsoft finally officially showed off the upcoming console in the “Xbox Series” family of consoles, complete with its $299 ERP. While the internet remains torn between whether it looks good, or like a washing machine (it does!), a new leak for the console has been shared on Twitter.

The leaked promotional video for the Xbox Series S comes from Twitter leaker WalkingCat, and showcases the Series S’s features. Based on the commercial, the Xbox Series S will come with 1440p gaming support. That’s pretty great for the $299 price it’s set at. What’s more, compatible games will run 1440p at 120 frames per second, so you can expect ultra smooth gameplay on compatible tiles. Plus, there’s support for DirectX Ray Tracing. Along with that, you get variable rate shading, variable refresh rates, 4K upscaling and more.

no point holding this back now I guess pic.twitter.com/SgOAjm3BuP

Moreover, the commercial mentions that the console is the smallest Xbox ever, and is 60 percent smaller than the Xbox Series X. So if you’re worried about the space it will take up on your entertainment center, well, if you could fit your Xbox One there, this will fit in easily as well.

The part that raises some concern in my eyes is the storage. The commercial mentions 512GB storage on the console. However, today’s games consistently cross the 100GB size, which means this storage will run out fairly quickly on the Series S. It’s unclear if the Series S will have an expansion port similar to the Series X’s but I sure hope so.

The commercial ends with the ‘Coming November 2020’ screen, and according to a recent report from Windows Central, both the Series S and Series X will come out on November 10. Hopefully, we will get more official information on this front soon.