Remember Project Neon? Yes, the codename to Microsoft’s new UI for Windows. Well, now it has an official name and it’s called Fluent Design System. This new design change is considered as an evolution of Metro UI (or Modern UI, as it was known later), which was originally introduced along with Windows 8 back in 2012. We’ll be able to experience some of this new Fluent Design UI in the upcoming Fall Creators Update, but that’s just the beginning, with room for plenty of improvements in the future. It will replace Metro UI and eventually be seen across Microsoft’s apps that are available on Android and iOS as well. 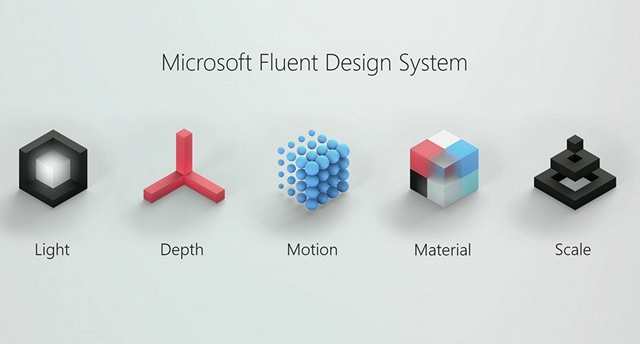 The current UI that we’re all using is almost 5 years old, so the design change is definitely a welcome addition. Microsoft’s Fluent Design System has five fundamentals – Light, Depth, Motion, Material and Scale. While these fundamentals do sound cool, we only know the fact that the new UI looks pretty cool. Plus, Mixed Reality headsets that are just around the corner will be taking full advantage of the Fluent Design System across the entire operating system. Well, you can take a look at Microsoft’s video regarding their new design language to clearly understand what we’re talking about.

Microsoft claims that this new feature is the easiest way to get back to whatever the user was working on. Let me get this straight. Consider a user running multiple Windows applications, for example. When the user clicks on the Task switcher button, he/she will immediately notice that the UI has evolved to include Timeline. The top portion of this timeline screen displays a row of apps that are currently running. Below this row, the user will be able to check out all the activity from the past. 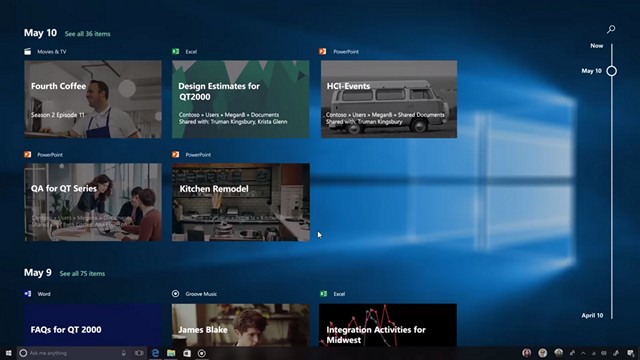 With Windows 10 Timeline, users will be able to travel back in time to take a look at their activity and continue from where they exactly left off, as if nothing happened. It doesn’t really matter if the activity was done hours or even months ago. The users will be able to easily hop back into their files, apps and sites, as if they never left.

Pick Up Where You Left Off With Cortana

The Timeline feature that we just discussed becomes much more interesting if you have multiple devices. Pick up where you left off is an extension of Timeline. Suppose a user has a secondary device, say a smartphone or laptop. If the user stops working on the primary device and moves on to the secondary device and starts using it, he/she will be able to continue the work, exactly from where the work was left off on the primary device with the help of Cortana, and hence the name, Pick up where you left off. 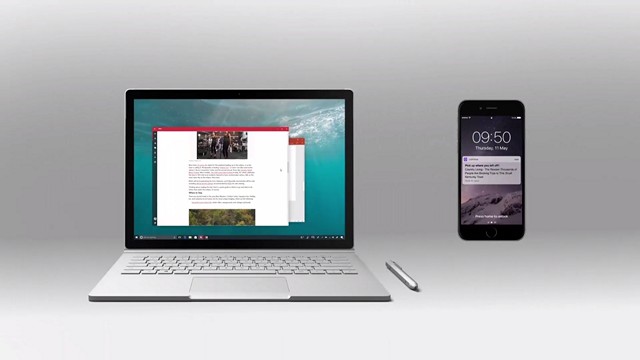 Now, how exactly does this work, you may ask? Well, Cortana is implemented as an AI in the cloud and as a result, it’s able to look at Microsoft’s graph data and recognize that the user was working on the primary device. So, once the user starts using the secondary device, Cortana pops up on the screen asking if the user wants to pick up where he/she left off.

Do you guys still remember the Windows Movie Maker? If so, consider Story Remix to be the successor to the long gone application that was used to create family videos. Story Remix application will let the users add computer-generated effects, soundtracks and titles to their family videos. Apart from this, Story Remix will also let you stitch images and add music, 3D objects, transitions, thereby helping you convert them into lively stories that anyone can enjoy, instead of watching a boring slideshow. This might not necessarily be the software that you’ll be utilizing if you’re a professional, but there are several other cool features that Story Remix promises to bring in the upcoming Fall Creators Update. So, check out Microsoft’s video for an in-depth look at their video editing application.

With OneDrive Files On-Demand, users will be able to access their files from the cloud and in turn save tons of storage space on their devices. All of the files will be seen in File Explorer and these files will also be available on other devices where you have your OneDrive account signed in. OneDrive placeholders was a feature that originally arrived along with Windows 8.1. It used to work quite the same as Files On-Demand, until it was removed well before Windows 10’s initial release. Sure, it’s good news that the feature is making a comeback under a new name in the upcoming Fall Creators Update. OneDrive Files On-Demand is completely cloud-based and it will only download the required files when you need them. If you’re running short on storage space, OneDrive Files On-Demand might be the feature you’ll be utilizing very soon.

We all love and enjoy Copy and Paste, don’t we? I mean, how easier can it be? Well, It looks like the folks at Microsoft have an answer for that question. They’re literally taking Copy and Paste to the next level. Introducing Cloud-powered Clipboard, a feature that lets you copy and paste between Windows 10, iOS and Android devices. Sure, Apple has a similar universal clipboard already, but thanks to their closed ecosystem, we need to own their products to get it to work. That’s not the case with Microsoft and that’s exactly what makes Cloud-powered Clipboard special. Microsoft builds a timeline of the content the user has copied, and makes use of their graph aware Swiftkey keyboard to sync clipboard across multiple platforms. Microsoft is also planning to implement the Cloud-powered Clipboard directly into Office apps, but that will arrive in a later update. 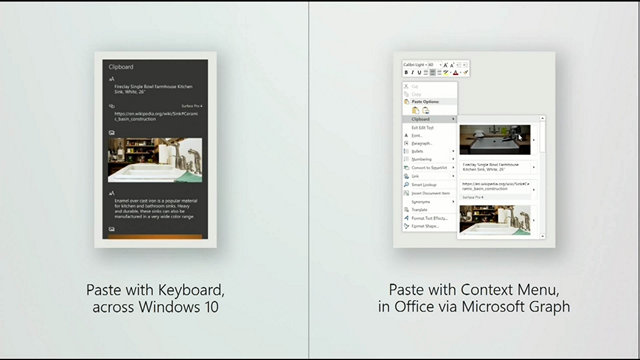 Mixed Reality was introduced in the Creators Update that came out last month. However, there are some improvements that will be seen in the upcoming Fall Creators Update. Mixed Reality is being implemented in Microsoft’s upcoming features that’s set to arrive with the update, like Story Remix that lets you create mixed reality by adding 3D objects to your photos and videos to tell stories in a whole new way. Microsoft’s new Fluent Design System is all set to take full advantage of Mixed Reality as well. Apart from this, Microsoft also announced their own motion controllers for Mixed Reality headsets. The company also revealed that companies like Acer and HP will start shipping their mixed reality headsets to developers this summer, with pre-orders being currently accepted.

It doesn’t take a genius to realize that the Fall Creators Update is coming this Fall. That being said, the company has earlier mentioned that the next update for Windows will arrive in September, but autumn doesn’t begin until September 23rd. So, we can expect the Fall Creators Update to be released in the last week of September. If you don’t think you can wait that long, you can sign up for the Windows Insider program to gain access to the test build, which already has some of the features that the upcoming update will carry in the final version.

SEE ALSO: Windows 10 S vs Windows 10: What Are The Differences?

It looks like there’s no stopping Microsoft from polishing their operating system. In fact, with a new design change, it certainly looks like a step in the right direction. The features that we discussed aren’t the only ones arriving in the update. Microsoft hasn’t revealed all the features yet, so it looks like we might have to wait for a later date in order to grab more details on all of them. That being said, I hope you’re excited for the update as much as we are. So, what do you guys think of the Fall Creators Update? Which feature excites you the most? Do let us know by shooting your opinions in the comments section down below.