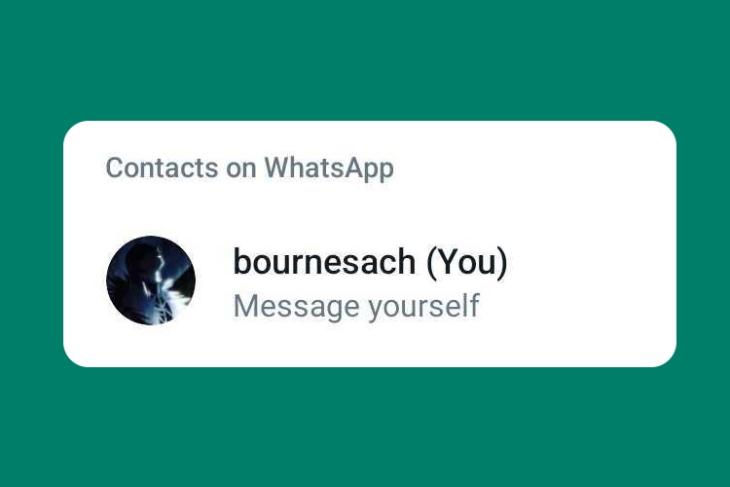 WhatsApp is expected to introduce the ability for you to message yourself and this has been in testing for a while. Now, the ‘Message Yourself” feature is reaching some beta testers, suggesting that it will be available for stable users soon.

WhatsApp is now rolling out the ‘Message Yourself’ or ‘Self Message’ feature (however you want to call it) to some beta users on Android. This is part of the WhatsApp for Android beta version 2.22.24.11.

With this new feature, you will be able to open a chat with your number. You just need to select your number from the contact list. Your number will also have the ‘Message Yourself’ tag indicative of the fact that you can use the feature. Your name will also get the ‘You’ suffix next to your chat name. Earlier, sending a message to yourself by using the URL ‘wa.me/91‘ helped in sending messages to yourself.

My colleague Anmol was able to test the feature and easily send messages to himself. You can check out the screenshots below to get an idea.

This will also show the message sent to yourself on all the linked devices so that continuing a chat on multiple devices becomes easy. It is also said that this feature is rolling out to some iOS beta users too.

However, there’s no word on when WhatsApp’s ‘Message Yourself’ feature will reach stable Android and iOS users. Given that the Meta-owned messaging platform has begun the rollout, this may happen pretty soon, and we will update once things are made official.

Meanwhile, WhatsApp has now started rolling out Communities to all users globally, allowing you to create and manage sub-groups with ease. This shall reach all in the coming weeks.