Skip to content
Home Internet What is Dolby Atmos: Everything You Need to Know

You must be hearing about Dolby Atmos a lot these days. It is being considered as the next big thing in audio industry after the surround sound systems. Dolby Atmos technology has been around since the year 2012, yet it’s gaining real traction just now. Initially designed for theaters, now the technology has forayed its way not only inside our homes but also in our backpacks (laptops) and pockets (smartphones). As more and more devices are starting to support the technology, it is only a matter of time when you will also own a device which supports it. All that is great news, but this also begs a question, what exactly is the Dolby Atmos technology and how does it differ from everything else? This article is our quest to answer these specific questions. So sit tight and learn everything you need to know about Dolby Atmos:

What is Dolby Atmos?

Dolby Atmos is the technology which focuses on delivering dynamic audio to our ears. Think of it as a 3D system for audio. Whenever you are watching a movie or video which supports Dolby Atmos on a compatible hardware, the sound will move around in 3-dimensional space giving out the experience that you as a viewer are right in the middle of the action. To understand it easily, let us compare it to standard and surround sound technology. 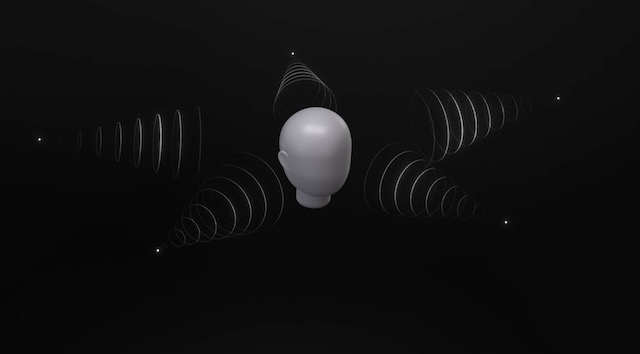 When you are watching a normal video, the sound is delivered to you in channels. A video supporting stereo will push the sound using two channels, one for each of your ears. When you are using surround sound, the audio will be delivered using multiple channels. The number of channels can range from 5 to 9 depending on your setup. That’s where the surround sound system gets its name, the audio surround you from all the sides. Still, there’s a drawback to the surround sound system, which held it back from providing a real life experience. No matter how many channels you use, the sound is still delivered to your ears in a linear channel. 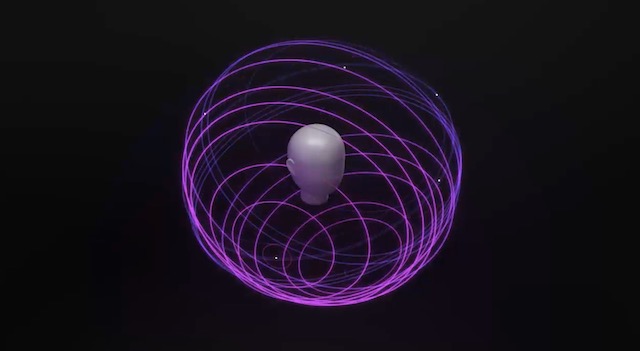 That is not the case in the real life. In real life, the sound is not delivered to you in a linear motion. Your ears are capturing sounds from all around you. Dolby Atmos was created to deliver this natural audio experience to us. It does not deliver the audio in linear channels rather the sounds move in a precisely placed 3-dimensional space giving you an experience that you are not watching the video from outside but rather that you are inside the video itself.

How Does Dolby Atmos Work?

Other than putting speakers around and in front of the audience, Dolby Atmos system requires it to place speakers above and behind the audience too. However, this is just the first step, as now even some surround sound systems utilise the similar speaker systems. However, this is where the similarity ends. The way both the systems deliver sound to your ears are very different. To understand this difference, let us imagine that we are watching a movie inside a theatre.

You are in a scene where a helicopter is flying. Now, the surround sound system will push the sound of the helicopter to the speakers above you. However, in Dolby Atmos, the sound is not pushed to a particular speaker rather it is pushed towards a certain point in the 3D space. The sound engineer will pinpoint the sound of a moving helicopter on its corresponding 3D trajectory. The Dolby System will be intelligent enough to push the sounds to the corresponding speakers giving you a natural experience. Even the volume, diffusion and the size of the audio coming out of speakers will change relative to the moving object (helicopter in this case), just like it happens in real life.

Theatres were the first place to utilise the Dolby Atmos sound system. This happened for two specific reasons, firstly, a movie theatre is the best place to experience true Dolby Atmos sound. Theatres have big empty spaces which can accommodate the required number of speakers and also there’s no outside interference. A set of 64 speakers is required to give you a precise Dolby Atmos experience. Secondly, producing Dolby Atmos content is a costly endeavour, hence only large budget movies could afford it. 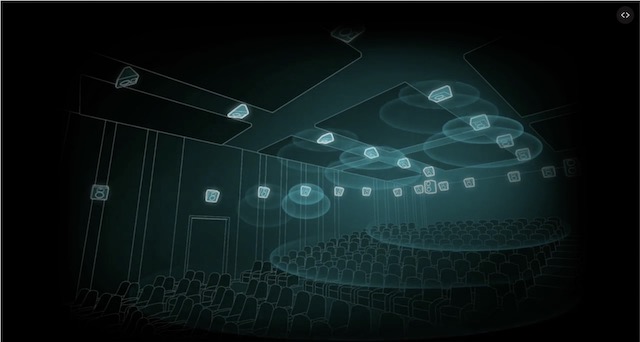 As of how it works, I have already explained the basics in the previous section. Basically, the idea is to bind the sounds to a 3D plane which corresponds to the actual objects or persons in the movie. Then, the Dolby software will direct those sounds to their corresponding set of speakers. The sound will move between speakers depending upon the movement of the object in the movie. To really get the hang of it, you have to watch a movie which supports Dolby Atmos audio inside a compatible theatre. If you have not experienced it before, I assure you, you will be floored. It will be equivalent to watching 4K content in 3D. 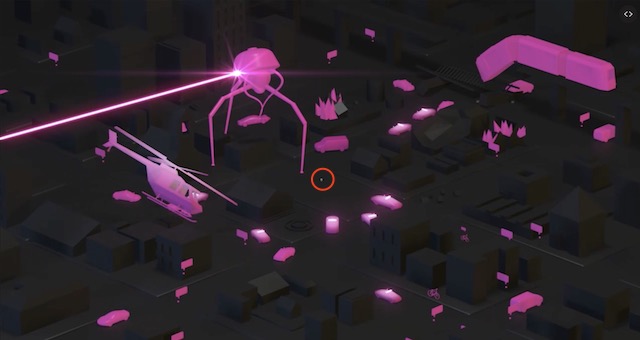 You must be wondering, how the heck will I fit 64 speakers in my room to get the Dolby Atmos experience and how much it is going to cost me. Well, you can rest easy as you can enjoy the Dolby Atmos experience at your home with as little as 7 set of speakers. Dolby itself recommends using a maximum of 14 speakers for an optimal experience. However, if your cost is something that cannot deter you, you can install the full 34 speakers package to get the best possible in-home audio experience. 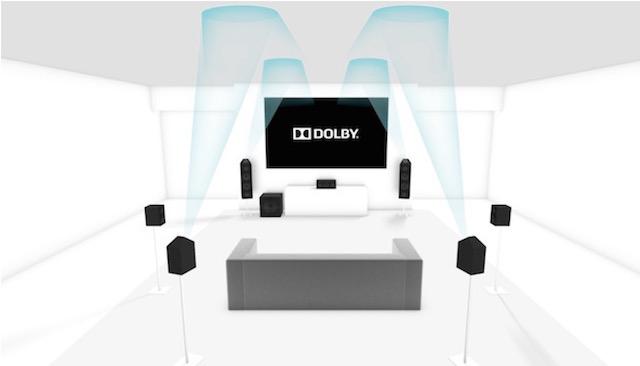 If you already have a surround sound speaker set up, you will be happy to know that your old speakers will work with Dolby Atmos. All you need to buy is an AV receiver capable of decoding the Atmos Sound. For overhead, speakers you have three options. Firstly, you can drill through your roof and install the overhead speakers (2-4) or you can find buy specially designed upward firing Dolby Atmos-enabled speakers. These speakers fire the sound upwards, so that it is bounced back against the roof giving you almost the same experience. If you do not want to buy even that, you can buy modules which convert your existing speakers into the upward firing speakers. However, the experience will not be optimal in that case.

Dolby Atmos in Smartphones and Laptops

Smartphones have become the king of content consumption. Today, more people are consuming content on their smartphones than anywhere else. This is what made smartphone manufacturers to include 2K and even 4K screens in their phones. However, one key missing feature has always been audio quality. The speakers and audio decks in the smartphones are just not powerful enough to deliver sounds which will please even an average audiophile. 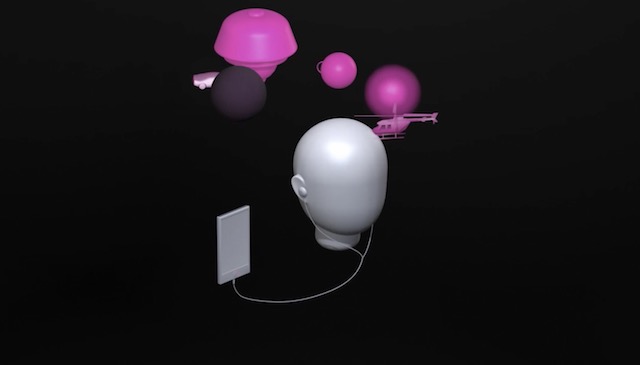 Dolby Atmos wants to change that by bringing its technology to our smartphones. Although, the quality is nowhere as good when compared to home or theatre sound system, still it is astonishingly good for such small and compact devices. Since smartphones don’t have the luxury of packing high-end speakers, the Dolby Atmos processor inside them renders the audio in virtual three-dimensional space over built-in speakers or headphones. The effect is more pronounced when you are using headphones than on speakers. Dolby Atmos not only provides the best experience of Atmos-enabled content but also improves the sound quality of normal videos, games, and songs. The same stands true for Dolby Atmos enabled laptops also.

All the popular streaming services are adopting the Dolby Atmos standard for supported content. However, you do need a decent internet speed if you want to enjoy the best possible audio quality. Netflix, Hulu Plus, and Amazon Prime are some of the biggest names which support the Dolby Atmos audio. Other popular services include Vudu which streams 4K UHD movies with Dolby Atmos sound. Even YouTube and Facebook stream supported content. You do need a Dolby Atmos capable home surround sound system to enjoy the content though. It will never sound as good on your smartphone or laptops.

In February 2016, Dolby also launched its developer kit for integrating its Atmos technology with the Virtual Reality. If you think of it, VR is the best place to experience Dolby Atmos, even more so than theatres. While using Dolby Atmos with VR, not only the sounds surround you, you are also visually right in the middle of things. VR with Dolby Atmos will the best place to consume the content in the future. But the future is still not here and it will take a lot of time before VR can become the main stream. If you have a VR headset with you, you can watch the VR documentaries about the making of Paul McCartney’s latest compilation album, Pure McCartney. 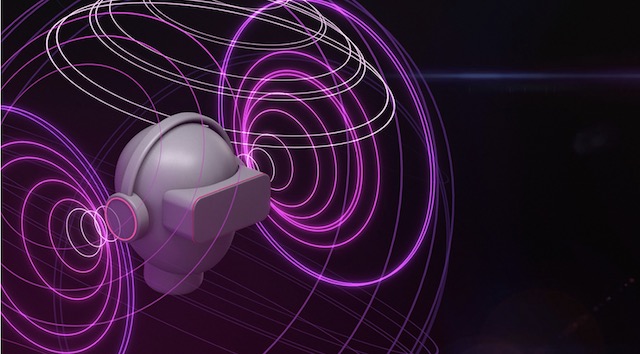 Dolby Atmos vs The Competition

There’s only one major competitor to Dolby at this point of time and that is DTS. In late 2015, DTS launched its own “Immersive Audio” technology called DTS:X. Now, let me make it clear. there’s no way any average person like you will be able to differentiate between the two and crown a winner. Only ones who are on the top of proverbial audiophile chart will be able to distinguish between the two and then also the decisions will be more subjective than objective.

The only way one of these technologies will win over the other is by the way of mass adoption. It will basically depend upon which of the two companies can lure more content creators to use their technology. Dolby already has a big head start on that one. As a consumer, you do not have to worry as 99% of AV receivers and speakers can support both the formats. So, in the end, we will all be winners as the competition will mean more vigorous adoption of the technology itself.

SEE ALSO: AAC vs MP3 Which Music Format Is Better

There’s no doubt about the fact that Dolby Atmos is the present and the future of the audio technology. In future, mosts of the movies will be supporting Dolby Atmos as it gives the best audio experience to viewers. It is good to see film makers acknowledging the importance of audio at the same level as that of the video. If you have never experienced Dolby Atmos before, find out the nearest theatre which supports it, and watch a movie which uses Dolby Atmos. People who already have Atmos supported home systems, check out the movies which make use of it. If you still have any doubts, shoot your questions in the comment section below.