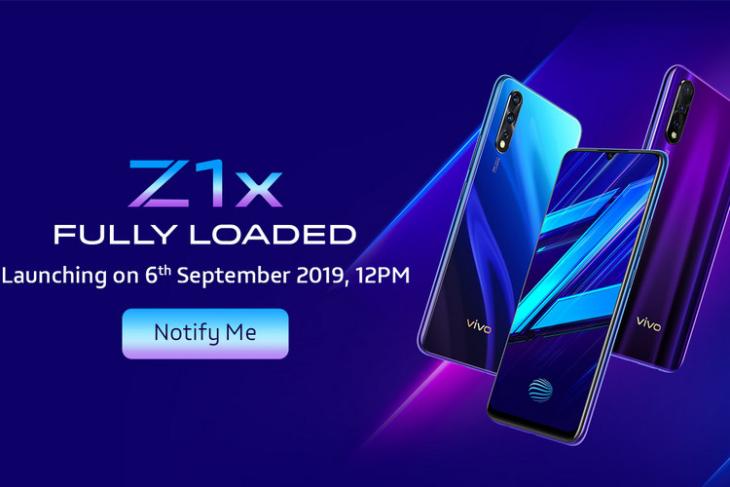 A month after launching the Vivo Z1 in India, the Chinese smartphone brand is prepping to launch yet another mid-range handset in India. Called the Vivo Z1X, the device will be launched September 6th, and will be available exclusively on Flipkart. The company on Tuesday posted an 11-second teaser video on Twitter, highlighting the phone’s under-display fingerprint sensor.

As can be seen from the image above and the video below, the Z1X will ship with a teardrop notch up-front, as opposed to the punch-hole screen on the Z1 Pro. The video also confirms a triple-camera setup on the back, while other teaser images posted by the company have confirmed that the device will be powered by a Qualcomm SoC, although, the exact chipset remains a mystery for now.

Vivo has further confirmed that the phone will come with a USB Type-C port and, support its proprietary fast-charging technology, FlashCharge. It is said to come with 22.5W charging that was first seen in the Vivo iQOO. Vivo is also ditching the microUSB port in favor of USB Type-C connectivity as more companies start making the transition to the new standard.

Additionally, the official Vivo Z1X product page on the Vivo India website reveals that the device will come with a 6.38-inch display and a 4,500mAh battery. Meanwhile, a report from SmartPrix suggests that the device will also ship with Samsung’s 48MP ISOCELL GM1 image sensor, although, that’s not yet confirmed officially. Apart from that, not a lot is known about the Vivo Z1X at this point in time, but we’ll hopefully get to know more about it in the days leading up to the launch.