Skip to content
Home News Vivo X30 With Exynos 980, Dual-Mode 5G to be Unveiled Next Month 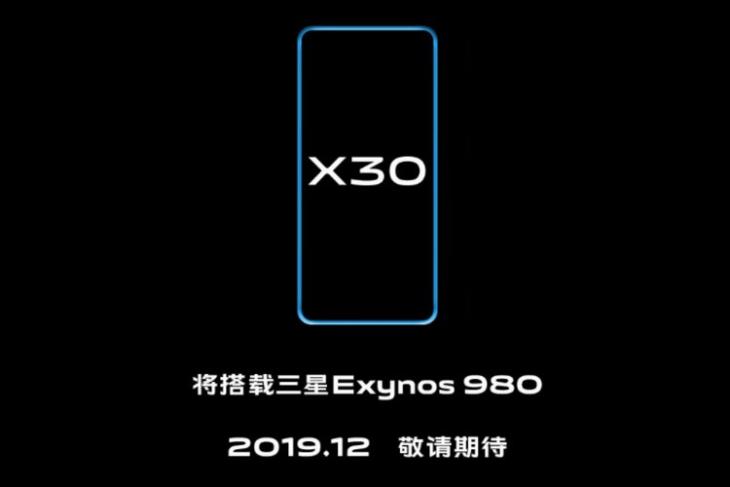 Vivo has announced plans to launch a dual-mode 5G-enabled smartphone next month, joining sister concern, Oppo, which revealed such plans last week. At a press conference in Beijing on Thursday, the Chinese smartphone giant announced that the Vivo X30 will be powered by Samsung’s Exynos 980 SoC, which comes with an integrated dual-mode (SA + NSA) 5G modem. While the company didn’t say it in as many words, rumors suggest that the device might also be accompanied with a ‘Pro’ variant with slightly beefier hardware.

Announced back in September as Samsung’s first 5G-integrated mobile processor, the Exynos 980 is built on the 8nm FinFET process and, is advertised as the company’s first artificial intelligence (AI) mobile processor with an integrated 5G modem that provides gigabit downlink speed in 4G LTE and up to 2.55Gbps in sub-6GHz 5G.

Alongside the dual-mode 5G modem, the Exynos 980 comes with an octa-core CPU comprising of 2x high-performance Cortex-A77 cores and 6x power-efficient Cortex-A55 cores. The processor also comes with the ARM Mali-G76 GPU. Then there’s the on-chip neural processing unit (NPU) that the company claims brings up to 2.7 times faster performance when compared to its predecessor.

With 5G expected to go relatively more mainstream next year, most smartphone vendors are prepping to offer devices with the latest cellular technology, not only at the premium end of the spectrum, but also at the mid-range. That being the case, chipmakers like Qualcomm and MediaTek have also announced plans to launch mid-range 5G-embedded SoCs next year, so expect the technology to percolate down to more mid-range devices next year.