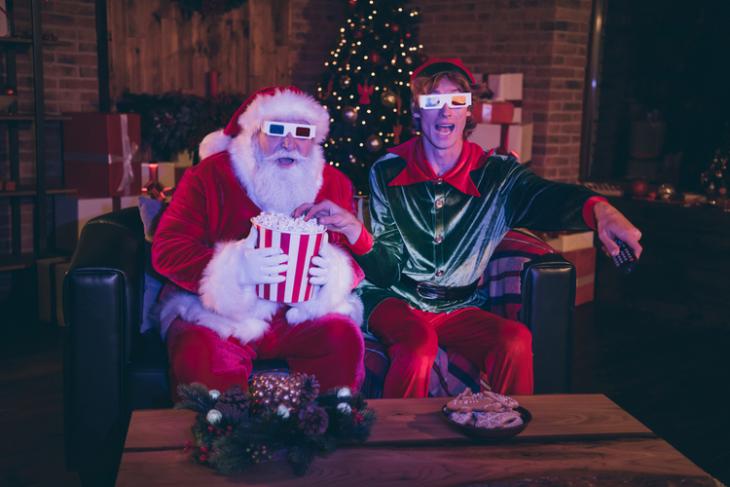 Although the holiday season is already upon us, I do feel a little blue for the current state of the world. These days, I open up Netflix and start watching a holiday film to gain some Christmas spirit. So, grab a pack of pringles and a coke because, in this piece, I am going to list the top 5 holiday movies to watch on Netflix that would fill you with joy and make you feel the Christmas vibe.

Below is an interactive table of contents. You can expand it and tap/ click on a title to instantly start reading about it.

It has been over a year since this masterpiece released on Netflix. A critically acclaimed Netflix original, this movie portrays the origin story of Santa Clause when an unworthy postman befriends a toymaker to bring happiness to a cold, dark town in the North.

The film is on par with any modern holiday classics, mainly because of the astonishing 2D-like, sketchy animations, and lighting effects. It earned a BAFTA and an Oscar nomination for the best-animated feature film last year.

So, if you are looking to witness something unique yet heartfelt, I would suggest you watch this movie on Netflix right now. I am sure you won’t be disappointed.

If you have missed this Christmas classic in your childhood, now is the time to watch it. This 2004 animated film takes you on a roller coaster ride on a magical train named “The Polar Express”. You see the perspective of a young boy (voiced by Tom Hanks) experience an extraordinary journey to the North Pole to meet Santa.

So, if you are feeling bored and want to watch something adventurous yet Christmassy, then I’d recommend you to watch this movie. It was one of my favorites during my heydays and I still sometimes re-watch it just for that nostalgic feel.

If you are a fan of light-hearted rom-com movies set at the time of Christmas, then this film would be a treat for you. Well, of course, it is the same old story of two people in love getting to be with each other at the end of the movie. However, there is a unique twist in the story when a simple baker from the USA switches place with, yeah you guessed it, a princess from the UK.

The film is pretty entertaining and will crack you up from time to time. Vanessa Hudgens, who plays both the baker and the princess, also did a pretty good job with the characters.

So, if you are up for a rom-com night during this holiday season, do give this film a watch. If you are unsure, check out the trailer below first.

Based on the 1996 Christmas short “How the Grinch Stole Christmas”, this movie brings back the Grinch and his super-loyal dog to spoil Christmas for the fictional town of Whoville.

In the movie, a grumpy green creature called the Grinch (voiced by Benedict Cumberbatch) does very mean and disgusting things with the citizens of Whoville, ruining their Christmas spirit.

However, in the end, the movie will make you realize that it is all about togetherness and love. So if you’re up for a Despicable Me-like Christmas movie, then “The Grinch” will surely interest you. You can catch the trailer right below.

Recently released on Netflix, this film is for those who like musicals and fantasy films. The movie takes you on a magical journey of a toymaker and his granddaughter to bring back their greatest invention, which is a magical toy-robot named Buddy.

Now, as this is a musical, the movie is filled with upbeat and melodious songs that bring a sense of joy while watching. You can check out the trailer for the movie right below.

This 26-min short film is for those Kung Fu Panda fanatics like myself who just love watching Po mess up and fix things using his own style of Kung Fu. This short film came way back in 2010 and is set right after the first film of the series.

This short film will surely cheer you up as it has all the necessary elements to make you laugh, cry, and even cringe. There’s a suicidal bunny in this for Chrissake! So, if you are a Kung Fu Panda fan, I am sure you are going to love this one.

A Holiday Movie to Lift up Your Christmas Spirit

So, these were the top 5 holiday movies you can watch on Netflix during this holiday. Now, if you already watched any of them and did not like it, well, do let me know why you didn’t in the comments below. Otherwise, you can check out our list of 45 best Netflix movies or 45 best Bollywood movies to watch on Netflix.

25 Gifts your Geeky Friends Will Love This Christmas

Best Android, iOS and Desktop Christmas Apps For You