Skip to content
Home News It Took 12 Years to Develop This 1.7 Gigapixel Image of the Milky Way and Its Breathtaking! 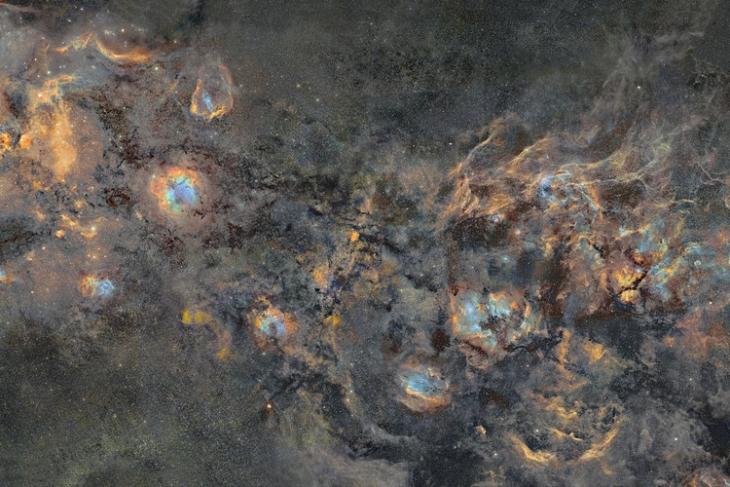 Space images, let’s admit it, are amazing! I mean, seeing thousands of millions of stars glitter on the pitch-black backdrop of space is mesmerizing. We have seen NASA release a ton of space pictures over the course of time. Recently, we even saw it develop a tool that lets you superimpose yourself on an actual picture taken on Mars. Now, a photographer has created a breathtaking panoramic image of the Milky Way galaxy that took over 12 years to develop. Yes, you heard that right!

Finland-based JP Metsavainio is a professional visual artist and space photographer who started working on the said Milky Way image back in 2009. Over the years, he captured tons of images of the space to collect a massive amount of data to develop the final picture.

The final result? A humongous panoramic view of our Milky Way galaxy that is 100,000 pixels wide. It contains around 234 individual mosaic panels that are stitched together to create a massive 1.7 gigapixel image.

“It took nearly twelve years to collect enough data for this high-resolution gigapixel class mosaic image of the Milky Way. The total exposure time used is around 1250 hours between 2009 and 2021,” wrote Metsavainio on his official blog.

Over the years, the photographer used various equipment to collect the data. Getting into the technical stuff, Metsavainio reveals that he used an old Meade LX200 GPS 12-inch scope, a QHY9 astrocam, Canon EF 200mm f1.8 camera optics, and Baader narrowband filter set till 2014. In the following years, he upgraded his gear to an Apogee Alta U16 astrocam, a Tolkina AT-x 200mm f2.8 camera lens, and the Astrodon 50mm square narrowband filter set.

After collecting the data, he developed the gigapixel-class mosaic-like picture on Adobe Photoshop. He released the final picture on his official blog site from where you can also buy physical prints of the image. Moreover, you can check out several of his pictures that were used to create the Milky Way image on his blog post.

So, go ahead and check out the breathtaking image of our galaxy and let us know what you think of it down in the comments.