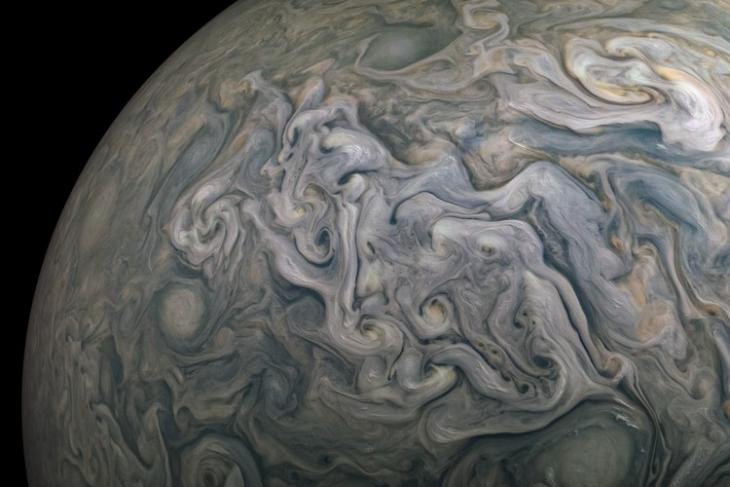 NASA is known to monitor different planets in our Solar System in the hopes of making some surprising discoveries about the universe. One of the many missions of NASA is to monitor the biggest planet in the Solar System – Jupiter. The space organisation’s Juno spacecraft has been orbiting the planet since July 2016. Its primary mission is to help the scientists find out the origin of Jupiter and recently the spacecraft completed its 26th close flyby of the planet, providing with an amazing picture of Jupiter’s surface.

Now, the picture, taken by the JunoCam, looks like an awesome modern artistic image. One of the reasons being that the image has been enhanced by scientist Kevin M. Gill to bring out the art in it. The scientist reportedly tweaked the original image from the JunoCam by intensifying the colours.

This image of Jupiter reveals a complicated topography atop Jupiter’s clouds. Upon close scrutiny of the image, it was found that there were “relatively small, bright, ‘pop-up’ clouds that were present near the swirling edges and the above the clouds. On the other hand, the nearby darker areas revealed greater depths.

However, technical and scientific explanations aside, the 21MB picture itself looks like a piece of art. NASA shares all the RAW images by the JunoCam for the public to use and enhance them with their touch to make it more readable or aesthetically pleasing.

Now, this image, in particular, can be great wallpaper for your desktop or laptop or even a mobile device, it is that much artistic. You can download the image from here and check out all the other images from the JunoCam here.