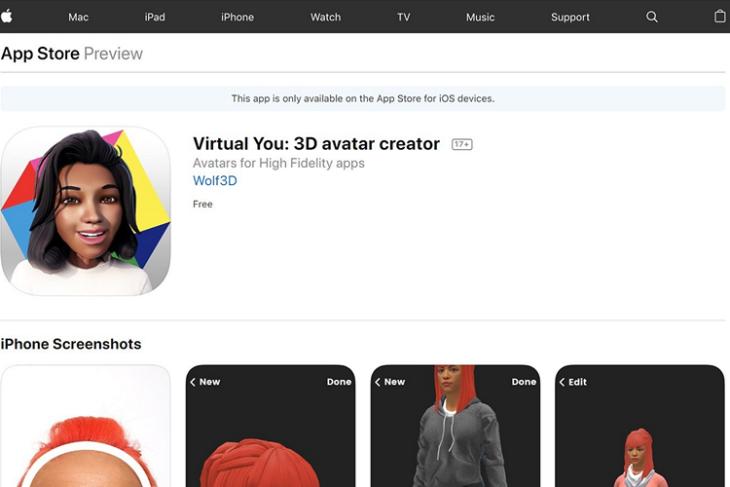 Popular open-source VR platform High Fidelity released its 3D avatar creator app named “Virtual You” earlier this week. The app will essentially allow you to create a customizable 3D avatar representing you from a selfie.

“Avatars have always been a pillar of VR and virtual worlds, but unless you’re a dedicated enthusiast, creating them hasn’t been easy. By making 3D customizable avatars available through a mobile app, we’ve cleared an important step towards bringing VR to billions of people.”, said Philip Rosedale, CEO & co-founder of High Fidelity.

There are thousands of wardrobe combinations to choose from so that you can make the avatar look exactly how you wish it to be. The avatars generated by the app can be used in any virtual environment built on High Fidelity.

The app allows you to generate as many avatars you want, just in case you’re feeling to try out a new look. You can also change your avatar anytime since all the avatars you have generated will be linked to your High Fidelity account.

“The Virtual You app began as part of High Fidelity’s virtual office project, which is currently in development and geared to help today’s modern workforce of digital nomads be together. In a professional context, people want to be recognizable and use an avatar that represents them.”, stated the company in a press release. The virtual office project has not gone live yet but the company took the first step ahead by releasing this mobile app.

The app is available for free on Apple’s App Store and Google Play Store. Check out the app from the link given below and let us know your thoughts on it in the comments.

25 Best Virtual Reality Apps and Experiences You Should Try