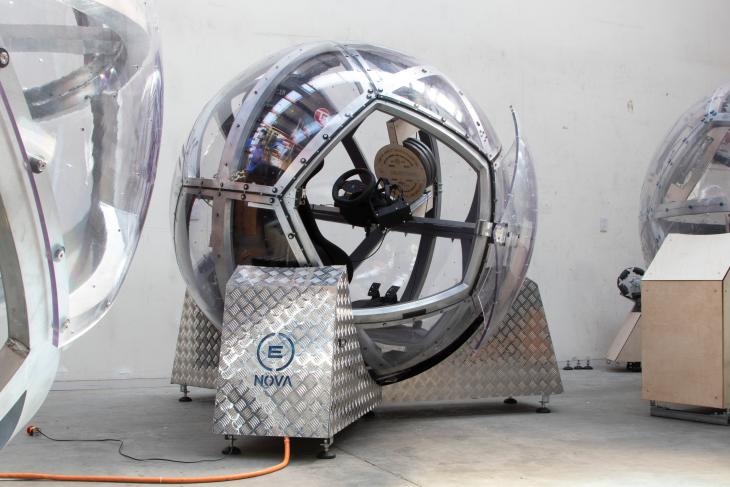 New Zealand-based startup Eight360 has developed an untethered VR motion simulator it calls Nova. The spherical VR motion platform rotates the user with respect to the VR movements to offer an immersive experience.

The machine consists of a two-meter diameter aluminum and polycarbonate ball with a one-person seat, controls, and a VR headset. Eight360 has placed the ball on three supports with omni wheels. According to the company, Nova allows full unlimited rotation in all axes corresponding to the user’s actions in the VR world.

This way, your body experiences the exact motions corresponding to the scenario, an aspect that can come in handy in games. The company says that the device currently integrates with a few PC games and simulators including DCS: World, X-Plane, and NoLimits2 – Roller Coaster simulator.

Setting the gaming aspect aside, Nova has potential use cases in several training applications. In fact, the startup has partnered with the New Zealand Defence Force for producing training devices. With Eight360 Nova, army personnel can practice driving large and expensive equipment without risking damage.

“A simulator also means different driving situations can be replicated and practised regularly without the added burden on the physical vehicles – improving sustainability as well as real costs in terms of wear and tear on the vehicles and fuel savings,” said New Zealand Defence Force’s Chief Technology Officer Mark Baddeley.

Considering that the device involves full rotation, one might naturally be worried about the motion sickness aspect. Addressing this concern, Eight360’s Founder and CTO Terry Miller says that’s not a problem with Nova. “The VR is too real. It makes your brain think that you are actually in a vehicle. When we put people in a virtual vehicle that recreates the feeling of actually being in a vehicle, they do not get sick,” he said.

To check out Eight360 Nova in action, you can watch the demo video below: