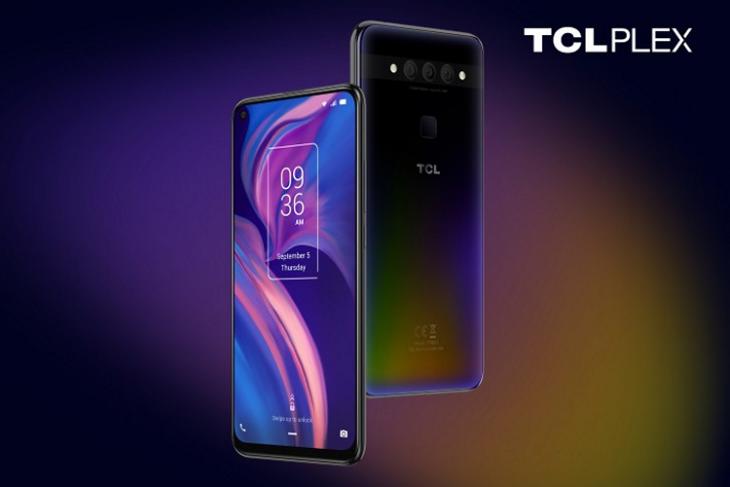 Popular Chinese TV maker TCL has entered the smartphone business by launching its first smartphone, TCL Plex, at IFA 2019 in Berlin. Though TCL has prior experience working on smartphones for other brands like Blackberry and Alcatel, this marks the official independent entry of the brand.

The smartphone packs a 6.53-inch Full HD+ LCD display powered by NXTVISION visual enhancement technology that boosts color and dynamic range of the display. The screen is manufactured by the brand itself, thanks to TCL’s expertise in manufacturing TV displays. There is a hole-punch cut-out in the top-left of the screen for housing the front camera.

Under the hood, the device will be powered by a mid-range Snapdragon 675 chipset. Clearly, TCL is focusing on the mid-range smartphone segment with this device. The company claims that the device is capable of converting SDR to HDR for videos in real-time, which I’m quite surprised by, considering the chipset used in the handset.

In terms of optics, the handset will come with triple horizontally stacked rear cameras. The primary sensor is a 48MP one with f/1.8 aperture while the secondary lens is a 16MP ultra-wide sensor with f/2.4 aperture. TCL has equipped a third 2MP sensor for capturing depth information. In the front, there is a 24MP camera for capturing stunning selfies.

There is a “Super Night Mode” powered by AI for capturing images in poorly lit or dark environments. The camera can also shoot slow-motion videos at up to 960 frames per second in HD. Weirdly, two LED flashes have been equipped on either side of the triple rear cameras.

There will be 6GB of RAM coupled with 128GB internal storage which can be further expanded by using a microSD card. In terms of software, the handset runs on TCL UI based on Android Pie.

The device draws juice from a 3,820 mAh battery that supports 18W fast charging. And yeah, did I tell you that the handset has a 3.5mm headphone jack?

The device does not have any fancy in-display fingerprint scanner technology. Instead, it uses the good-old physical fingerprint scanner which is mounted at the rear. Speaking of the rear, the handset flaunts a holographic finish on the backside which has significantly boosted the aesthetics of the device.

The handset has a “Smart Key” that allows you to trigger actions based on a single press, double press, or long-press. And don’t worry, they are remappable by the user.

TCL Plex will be available to purchase in Obsidian Black and Opal White color variants and is priced at €329(Rs. 26,000). In terms of availability, the device will be available by the end of the year in Europe. There is no information about the availability of the handset in other markets as of now.