macOS Mojave brings a number of new features which enhance the entire macOS experience and make it more productive and enjoyable to use. My favorite feature of macOS Mojave is the new dark mode which allows me to work late at night without having to strain my eyes too much. Just like the new dark mode, macOS Mojave focuses more on enhancing features that existed beforehand rather than introducing new features of its own. If you’ve been wondering how to take a screenshot on a Mac and thinking if there’s a print screen feature for Mac, you’ll be glad to know that there are a bunch of different ways to take screenshots on Mac that you can try. So let’s take a look at how to screenshot on Mac:

How to Take a Screenshot on a Mac

The ability to take screenshots has been a part of macOS since as long as I can remember. With macOS Mojave, Apple has improved upon this feature allowing users to not only quickly take screenshots but also annotate them. In this article not only we will see how to screenshot on Mac, but also how to change the screenshot format, change its default destination, and more. So let’s get cracking, shall we?

How to Take a Screenshot on a Mac Using Keyboard Shortcuts

As I said, macOS Mojave makes it very easy to take screenshots. Long time users of macOS will remember the old grab tool which was used to take screenshots. In macOS Mojave, Apple has replaced the Grab tool with a new tool called, “Screenshot”. You can either launch the app to get access to various screenshot tools or use keyboard shortcuts to get access to them. Since keyboard shortcuts are much faster, we will show you how you can use them to quickly capture screenshots:

2. How to Screenshot of a Portion of Display

If you don’t want to capture an entire desktop and just want to take a partial screenshot on Mac, just press the following keys:

Once you hit the shortcut, you will notice that the mouse pointer has turned into a small screenshot tool. Just drag to cover the area that you want to capture a screenshot of and let it go. It will automatically take the screenshot of that area. 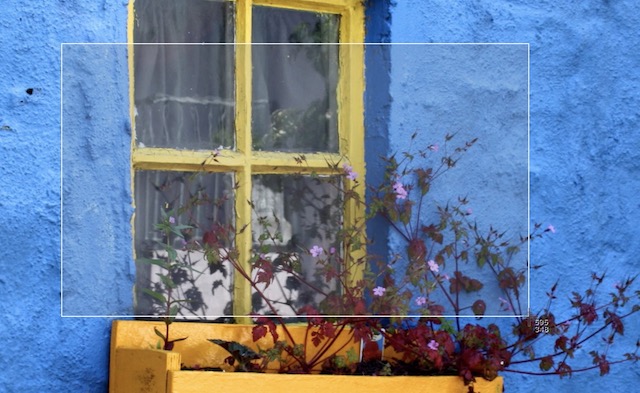 3. How to Screen Capture a Mac Window in macOS Mojave

While you can use the second method that we discussed above to take a screenshot of an app’s window, there’s a way easier method to do that. Using this method will not only be faster but you will also get a more precise screenshot. To use this method, just do the following: 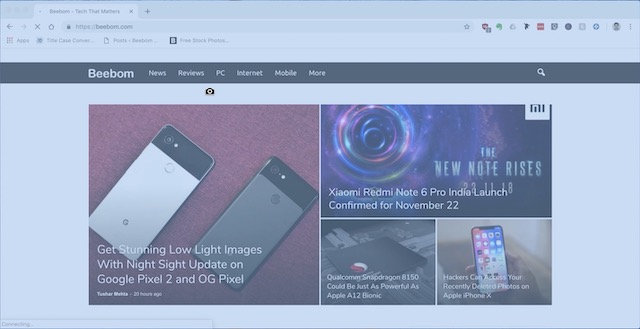 Once you do that, it will automatically capture the screenshot of the app’s window as shown in the picture below.

How to Launch the macOS Screenshot Tool

While the above keyboard shortcuts are easy to remember, if you find yourself forgetting them, you can use the macOS screenshot tool as well. There are two ways to do this: 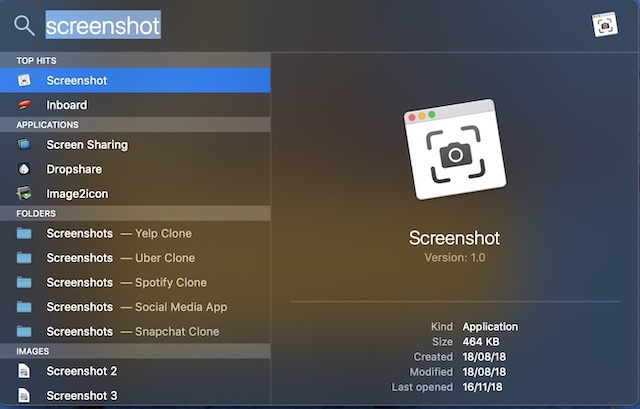 Once you launch the app, you will notice that there are five different buttons available. You can easily see what each button does by hovering your cursor point above each icon. From left to right these buttons serve the following purpose:

The first three are the screenshot features which most of us are going to use frequently and I have already discussed them in the previous section. The fourth and fifth options are for recording your screen rather than taking a screenshot. This is great if you want to readily create a video tutorial for someone. Do note, that there are no keyboard shortcuts attached to these features and you will have to launch the macOS screenshot app to get access to them.

Use Timers to Take a Screenshot on a Mac

There are situations when you need to take a timed screenshot. Whatever your reason behind wanting to use a timer to take a macOS screenshot, you can easily do this in macOS Mojave. 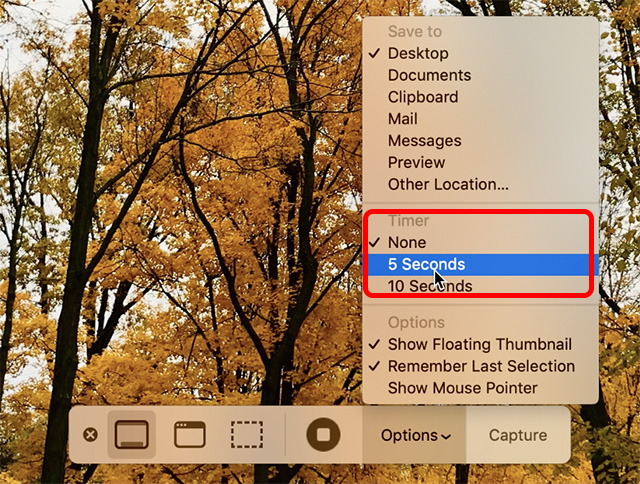 That’s it, macOS Mojave will automatically take the screenshot once the timer expires.

How to Annotate Screenshots in macOS Mojave

Now that we have learned how to take a screenshot on a Mac, let’s see how you can annotate the screenshots you take. In macOS Mojave, you will notice that whenever you capture screenshots, a small window appears in the bottom right of the screen just as shown in the picture below. 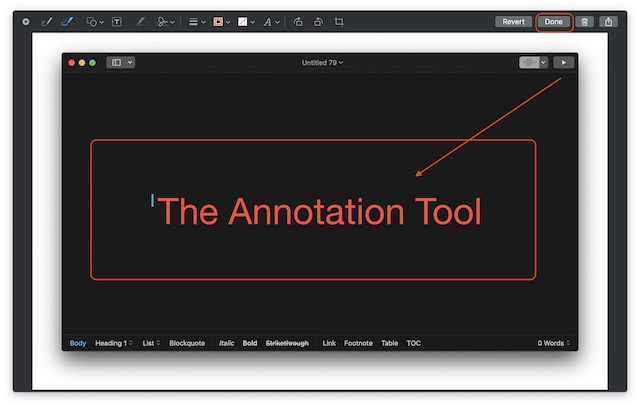 How to Change Default Screenshot Location in macOS Mojave

macOS Mojave has also made it easier to change the save destination of the screenshots you take. By default, all your screenshots are saved on the desktop, however, if you don’t want to clutter your desktop, you can change the macOS screenshot destination pretty easily. Just follow the steps below:

2. Here, click on the Options button. You will see that you are presented with various options, the first being the “Save to”. To change the save to location, you can either select the options presented or click on the “Other Location” option to select your own location. 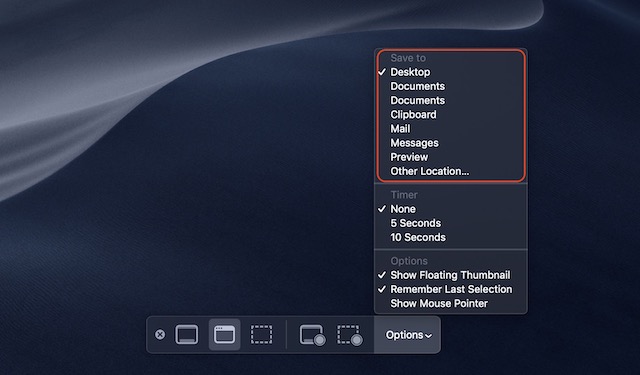 How to Change Screenshot File Format in macOS Mojave 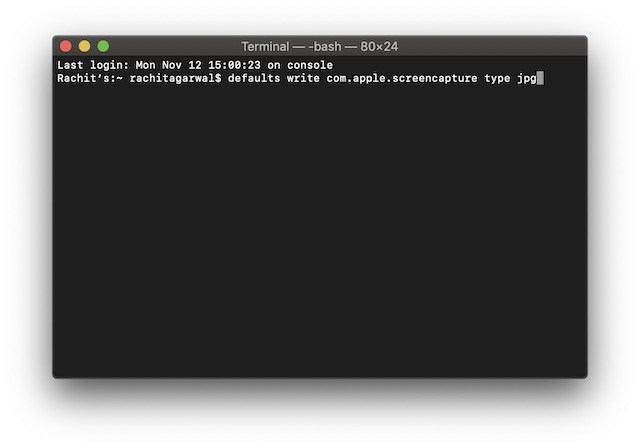 That’s it, your screenshots will now be taken in JPG format. If you want to revert back to PNG, just replace the word “jpg” with “png” in the terminal command and repeat the process. Similarly, you can change the format to PDF by using “pdf” in command and so on.

Best Third-Party Apps to Take a Screenshot on a Mac

While the included screenshot tools are enough for most of macOS users out there, some people prefer to use a dedicated third-party tool which offers extra features.If the macOS screenshot tool isn’t feature-rich enough for you, here are 3 best apps to take screenshots in macOS Mojave:

Monosnap is my favorite third-party screenshot app as it is very powerful and completely free of charge. The app lives in your Menu Bar allowing you to easily capture screenshots of your desktop, app, or anything else that you want to. My favorite thing about Monosnap is that the screenshot automatically opens in an editor window allowing me to quickly change the file name, file format, and add annotations if required. If you are looking for a third-party screenshot tool, you should definitely give Monosnap a shot. 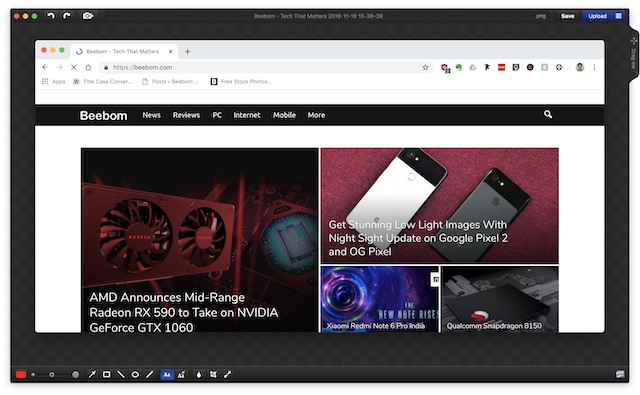 If you are looking for a really powerful macOS screenshot tool to aid you in your professional work, Snagit is the one to look at. While priced at a premium, Snagit is an all-in-one tool for all your MacBook screenshot needs. The app not only allows you to capture the entire desktop, a part of the desktop, and app windows, but it also allows you to capture entire web pages, thanks to its scrolling screenshot feature. The app also comes with a built-in editor which allows you to fully edit the screenshot. I am not just talking about annotation here; Snagit offers a full-blown image editing system. The app also allows you to carry out a screen recording of your desktop. If you are a power user and require something that can match your workflow, this is the app to get. 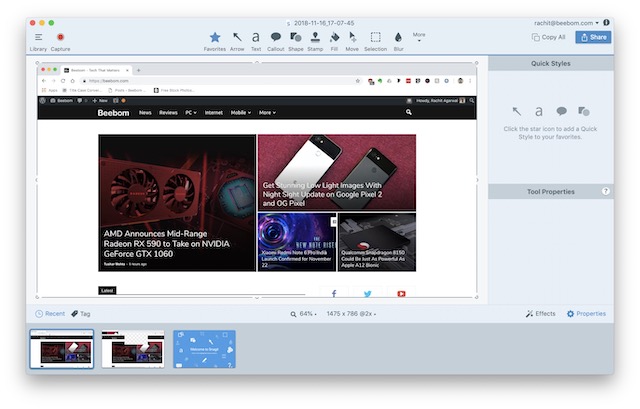 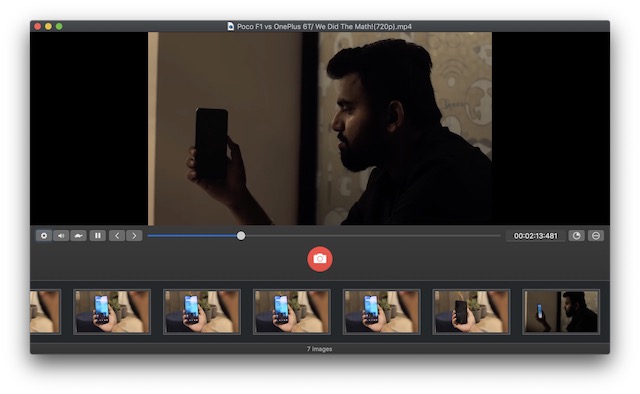 Take a Screenshot on a Mac Using These Methods

How to Hide a File or Folder in macOS

macOS Mojave Public Beta Is Here, but Should You Download It?

The First Public Beta Of macOS Mojave is Here; Here’s How You Can Download It

How to Get macOS Mojave Features on Windows 10

How to Enable Favicon in Safari (iOS 12 and macOS Mojave)