Whenever you take a screenshot on your Mac, the screenshots are saved in the PNG format by default. PNG files are better than JPG files, as they offer lossless compression, meaning the quality of image won’t be affected even after you compress the image. However, PNG files are also exponentially larger than the JPG files which make them harder to share online. Also, slowly they eat away a good chunk of space on your Mac’s hard drive without you even noticing it. Hence, for most of the use cases, it is better to take screenshots in JPG format.

Use Terminal to Change Default Screenshot Format in Mac

Terminal is a versatile tool which can open a portal to a plethora of hidden features and settings only if you know how to access them. To change the default screenshot format from PNG to JPG, open terminal, copy-paste the following command and then press return/enter. That’s it, now whenever you take a screenshot it will automatically save it in the JPG format.

You can even save the screenshots directly in PDF format if you wish to. Just change the ‘jpg’ in the command line to ‘pdf’.

By just changing the format in the command line you can set the default format for screenshots. The most common file formats are JPG, PNG, TIFF, and PDF. Feel free to change the command line and explore these formats.

Use Third-Party Apps to Capture Screenshots in JPG

What if you are someone who takes a lot of screenshots and switches between the formats frequently. Typing the command every time to switch the format can become a hassle. In such cases, you can use several third party apps which ask you to select the required format before you save your screenshot. The one I use and rely upon for most of my screenshots is Monosnap. It is a free app which you can download from the Mac App Store. The app when launched lives in your menu bar. You can take a screenshot either by clicking on its icon in the menu bar or by using a customized hotkey. 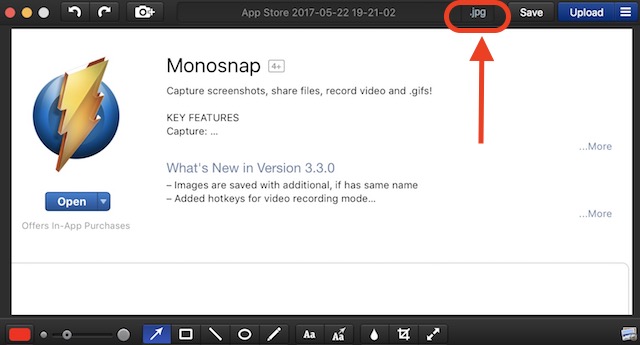 Change Screenshot Format to JPG in Mac With Ease