While the internet is the place to find the information you are looking for, it doesn’t make it any easier to save, compare, and contrast the data that you get. Since the data is hosted on different websites that can only be viewed using a web browser, it’s hard to collect the data and keep it updated. You can try to manually copy and paste data, however, it’s a fool’s errand as depending on your data set, the time cost will not be feasible. That’s where web scraping comes into play. Web scraping is a technique that is used to automatically extract large amounts of data from websites and Scrapestack is one of the best such services out there. Scrapestack uses its REST API to give you real-time web scraping abilities. In this article, we are going to take a quick look at its features and everything else that makes it a great web scraping service.

The Scraptestack REST API was built to allow users to scrape web pages at scale without having to program solutions for problems like geolocations, IP blocks, and CAPTCHAs. It supports a series of features which enhance web scraping, such as JavaScript rendering, custom HTTP headers, various geo-targets, POST/PUT requests, along with an option to use premium residential proxies instead of data center proxies. 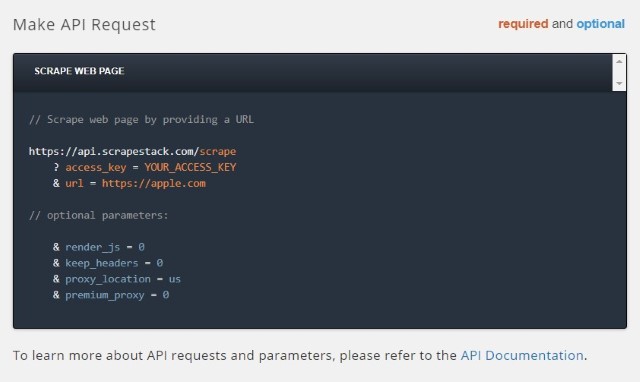 If you opt to use Scrapestack for your web scraping needs, here are some of the benefits that you can expect from the service.

As you can see from the features mentioned above, Scrapestack’s web scraping REST API is superior to most of the normal web scraping APIs that you can find on other similar services. However, that’s not the only good thing about Scrapestack. One of the biggest advantages of using Scrapestack is its pricing structure. The pricing structure is what makes the service accessible to individual users and corporations alike. So, let’s discuss its pricing, shall we?

Scrapestack offers one of the best pricing structures in the web scraping industry. For starters, you can start using the service for free using its “Free Plan”. The best part about Scrapestack’s free plan is that you don’t need to input your credit card information to work. Of course, the free service has restricted features (for example, it is missing features like HTTPS encryption, JavaScript rendering, and more), however, it’s far better than having no web scraping service at all. 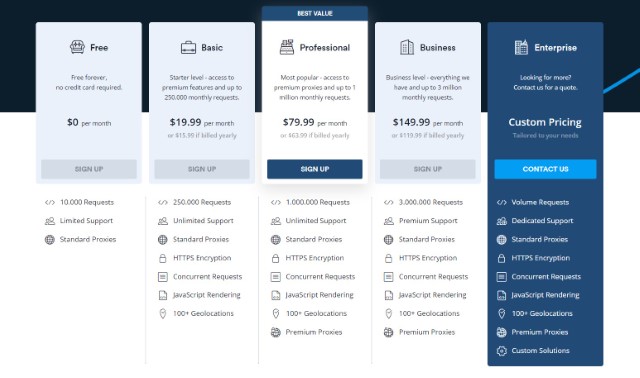 Also, while the free service is restricted, it’s more than good enough to meet the needs of individual users. Once you find the service useful and ready to pay for all its features, you can get its “Basic” version for a subscription price of $19.99/month ($15.99/month if billed annually). The only feature missing in the “Basic” version is the ability to use premium proxies. If you really need the premium proxies feature then you will have to get the “Professional” plan which costs $79.99/month ($63.99/month if billed annually).

Finally, if you are a business who has extravagant needs (more than 1 million monthly requests), the “Business” plans start at $149.99/month ($119.99/month if billed annually). If you want more, you can contact Scrapestack for a custom plan. Also, since its a web service, you can use it from any platform including Windows, macOS, Linux, and more.