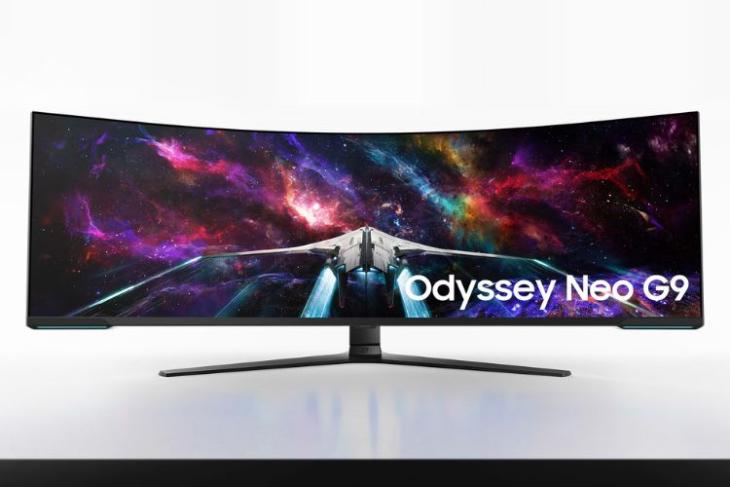 Two days ahead of CES 2023, Samsung has introduced a few monitors, including the Odyssey Neo G9. This is touted as the world’s first dual UHD monitor, which was also teased at AMD’s event back in November 2022. The company has announced the Odyssey OLED G9, the ViewFinity S9, and the Smart Monitor M8 alongside. Check out the details below.

The Samsung Odyssey Neo G9 (Model Name: G95NC) comes with a 57-inch curved display based on the quantum mini LED technology. It has a curvature of 1000R and supports VESA Display HDR 1000.

The Samsung Odyssey OLED G9 (G95SC) with a 49-inch dual quad-HD curved (1800R) display. The display gets Samsung’s quantum dot technology, a 32:9 aspect ratio, and a 1,000,000:1 dynamic contrast ratio. It also comes with a 0.1ms response time and a 240Hz refresh rate. It also comes equipped with the Samsung Gaming Hub and apps like Netflix, YouTube, and Amazon Prime Video.

The new Smart Monitor M8 has a 27-inch display (in addition to the existing 32-inch one) with a 4K resolution. The display can rotate by up to 90 degrees and supports the height-adjustable stand. It includes a 2K SlimFit camera, access to Samsung Smart Hub/Gaming Hub, Samsung Knox Vault, and the option to connect and control various connected devices (lights, cameras, doorbells, locks, and more) via built-in SmartThings Hub.

More details like price and availability are still not out yet.

CES 2023: FluentPet Connect System Lets You Communicate With Your Dog